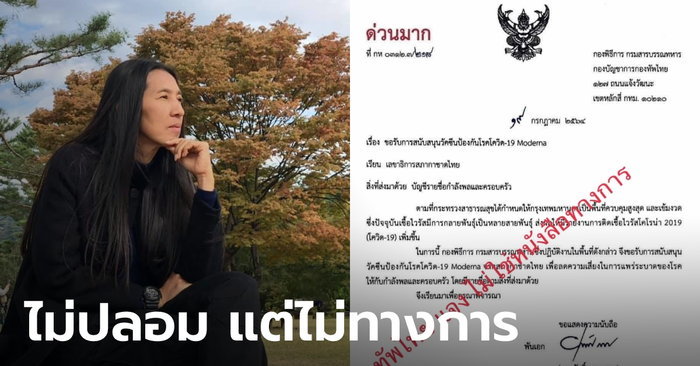 case progress The online world has published official documents. from the ceremonial Military Correspondence Department Sent to the Secretary-General of the Thai Red Cross Society Request for support for the “Moderna” vaccine to be administered to soldiers and their families.

latest Wassana Nanuam medianewsfamous military line posted a message After receiving preliminary clarification from the Thai Army indicate that the document not fake documents But it’s not an official document. will be announcednewsofficial tomorrow The message says

Not a fake document, but not an official document. no authority Send a letter to an external government agency

After spending an hour, the Royal Thai Army clarified, avoiding saying the documents were real, but using the words that were not official documents sent to outside agencies. Must check, will announce tomorrow.

After the social world shared a document claiming that as a ceremonial Military Correspondence Department to the Thai Red Cross Society Please support Moderna vaccine until it has been heavily criticized. but some say It’s a fake document

General Chalermphon Srisawad, Commander-in-Chief of the Armed Forces The matter has been reported. to investigate the facts immediately such official books It is not the nature of an official letter sent to an external agency.

However, if the investigation finds the facts tomorrow (July 23, 2021), then it will inform the society of the facts further.

The source said the document was an informal document submitted by the unit to the Thai Red Cross Society. and has no authority to make such a book out Therefore, outside government agencies were set up to investigate.