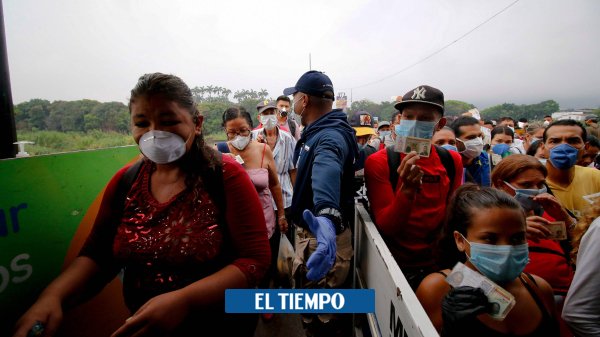 A new phenomenon is added to the migratory crisis on the border with Venezuela, in Norte de Santander. After the voluntary return of Venezuelan migrants to their country during the pandemic, the authorities and residents warn of a new return of Venezuelans to Colombia.

According to figures from Migración Colombia, since the closure of the border on March 14, 106 thousand migrants have returned to Venezuela and about 40 thousand more are waiting to be able to do so.

However, after the reactivation of the economy in Colombia, hundreds of Venezuelans in search of opportunities They have embarked on a new journey through the Colombian highways towards the interior of the country.

Deivy Rosero is one of the migrants who failed to return to his country. For this reason, he decided to return to Popayán, the city where he lived for the last three years. For him, being at the border or returning to Venezuela is no longer a viable option.

(You may be interested in: What treatment does Governor del Valle’s disease require?)

Here life is harder, I prefer to go back and take advantage of the fact that restaurants have already opened and commerce has been activated

“I arrived in July thinking that here or in my country I would have opportunities, but here life is harder, I prefer to return and take advantage of the fact that restaurants have already opened and commerce has been activated. My cousins ​​and a group of friends who are still in Valencia (Venezuela) will do the same “Rosero said.

Until June there were 1,748,716 Venezuelans in Colombia, 43.6 percent are in regular condition and 985 thousand of them, a figure that corresponds to 56.4 percent, is in an irregular condition.

Many migrants who were waiting in tents that the Government of Norte de Santander established as a temporary space to live and shelter, now return to the center of the country.

Víctor Bautista, secretary of Borders and International Cooperation of Norte de Santander, affirmed that although the daily monitoring has as a priority to measure the flow of migrants to Venezuela, since August they have identified groups between 20 and 35 people who transit in the opposite direction , to Cúcuta and other cities in the country.

“We have corroborated that there are groups of Venezuelan migrants who are returning to the interior of the country and to the south of the continent. Some were in Venezuela and others have been at the border and failed to enter. The course is undefined “, Bautista sentenced.

According to the testimonies of residents on the border, on the Venezuelan side they would be offering travel packages to any destination in Colombia, Peru and Ecuador.

(Also: Who protects us from the police? The Medellín councilor’s speech)

The current strategy is that the walkers go from town to town, to avoid being deported and because they know that they will not be helped along the way.

Walter Granados, a merchant on the border, warned that the border situation with the new arrival of Venezuelans could worsen in December.

“There is no control over the new migration to Colombia, again there are walkers on the roads to the interior of the country. The current strategy is that the walkers go from town to town, to avoid being deported and because they know that they will not be helped along the way, “said Granados.

(Read also: Outrage over acts of racism against a young manicurist in Medellín)

The situation in Cúcuta

This Tuesday, after a working table between local authorities and a delegation from the National Government, strategies were defined to solve the migratory situation and economic reactivation.

Jairo Yáñez, mayor of Cúcuta, specified that the migratory phenomenon and the pandemic keep the city on permanent alert.

“The migratory problems and the social and political imbalance in Venezuela are experienced in Cúcuta. With the opening of the economy in Colombia and the job opportunities, we have the great risk that the pendular migration will generate new concerns, ”said the mayor.

(In Barranquilla: Criminal who murdered a woman on a bus during robbery apologized)

Migrants walk the roads of the country again in search of a place of opportunities.

For his part, Juan Francisco Espinosa, Director of Migration Colombia, reiterated the commitment to invest this year $ 14 billion pesos in the biometric identification process, which will have an impact on a safe and reliable process for migrants and citizens in Colombia.

“We have always talked about migration as an opportunity for the development of the regions and the country. The challenge is to find the mechanisms that allow the incorporation of foreigners into the productive life of our country and we are working on that“Espinosa said.

(Also: In the only funeral home in San Andrés they got covid and the dead accumulated)

For now, authorities and residents on the border agree that the new arrival of Venezuelan migrants to the country is a phenomenon that sooner or later would happen. The new challenge that arises is to monitor and control the Venezuelan population seeking opportunities in Colombia.

ANDRÉS CARVAJAL
For the time
CÚCUTA