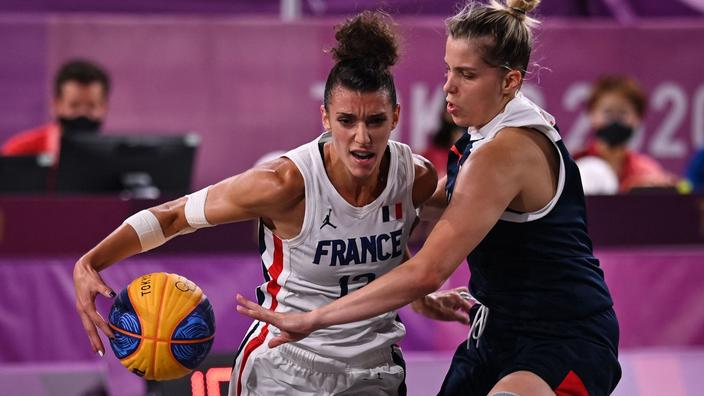 With two successes this Monday, one superb against Russia and the other sluggish against Mongolia, the Blues raised their heads and raised the bar of their ambition to be on the podium.

The French women’s 3×3 basketball team achieved their best match of the group stage by beating Russia (17-14) on Monday night at the Tokyo Games, and thus retains little hope of qualifying directly for the semi-finals. finals of the Olympic tournament. Victorious over Mongolia in the afternoon with much more difficulty (22-18), the Blue, 5th in the standings, now have three wins in six matches. They are guaranteed to finish between 3rd and 6th place, synonymous with participation in the qualifying play-offs for the last four. But a victory against the Romanians on Tuesday for their last meeting of this phase, combined with defeats of Japan, China and Russia, all in favorable waivers compared to them, could allow them to advance directly to the semi-finals. .

The chances are slim, but while waiting for a possible miracle, they showed a completely different face than in the previous five games at Aomi Urban Sports Park, finally worthy of the status of medalists who were given before these Games. Symbol of this resurrection, Mamignan Touré, until then the shadow of herself, came out the big game with 10 points in the musette, well supported by Laetitia Guapo (5 pts). Skillful (55% success), the French also defended extremely well against Russians pushed to awkwardness (35%) and without a solution.

Three hours earlier, it had taken a shot behind the arc of Mamignan Touré, announcing finally his coming awakening, to deliver the Blue against the tenacious team of Mongolia, the weakest team in the group. Almost always ahead of the score, they had seen their short lead of four points (14-10) melt to 18-18. It took an open double-step missed by Chimeddolgor Enkhtaivan, for France to detach definitively in the last two minutes, while opposite the rotation was no longer done since the injury to the leg of Solongo Bayasgalan, after a shock with Laetitia Guapo. The latter scored 9 points, living up to her status as the best player in the world, according to an individual ranking established by the International Federation (Fiba). His runner-up is Mamignan Touré. If they combine their talents at the same time, the dream of a medal is still allowed.