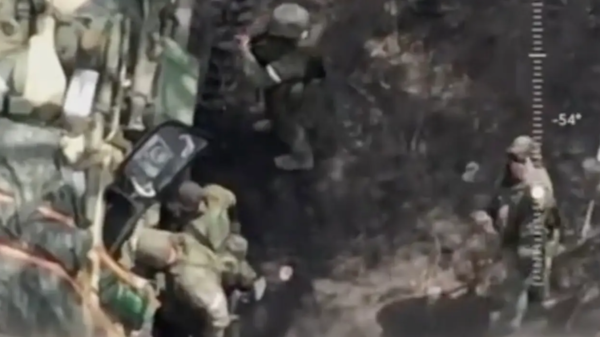 In shocking new footage, a new video clip spread on social media showed a Russian soldier escaping from a Ukrainian drone that tried to target him with his comrades.

In detail, the 90-second clip, which was published last Sunday, showed a Ukrainian drone (drone), targeting a group of Russian forces who were standing next to a vehicle.

At the 17th, one of the six Russian soldiers turned his head toward the sky and saluted the plane.

While the camera was in motion, the drone fired a grenade at the BTR-82A, an 8×8 armored personnel carrier, setting it on fire.

It is noteworthy that the date of the video was not clearly specified, but the information indicated that it was taken in eastern Ukraine.

control of the east

Moscow, whose forces have made progress in eastern Ukraine during the last period, is seeking to control Severodonetsk, because this step would likely pave the way for controlling the cities of Sloviansk and Kramatorsk, the last strongholds of Ukrainian forces in the east.

Russia had recognized the independence of Luhansk before launching the military operation on the territory of its western neighbor on February 24. To announce, months later, the launch of the second phase of that military operation.

The Russians are working to control the important Donbass region, with the aim of opening a land corridor connecting the lands and regions in the east to the south, where the Crimea peninsula, which Moscow annexed to its territory in 2014.

News 24 | The audio-visual stops an Arab visitor from practicing advertising in the Kingdom and fines her 400,000 riyals