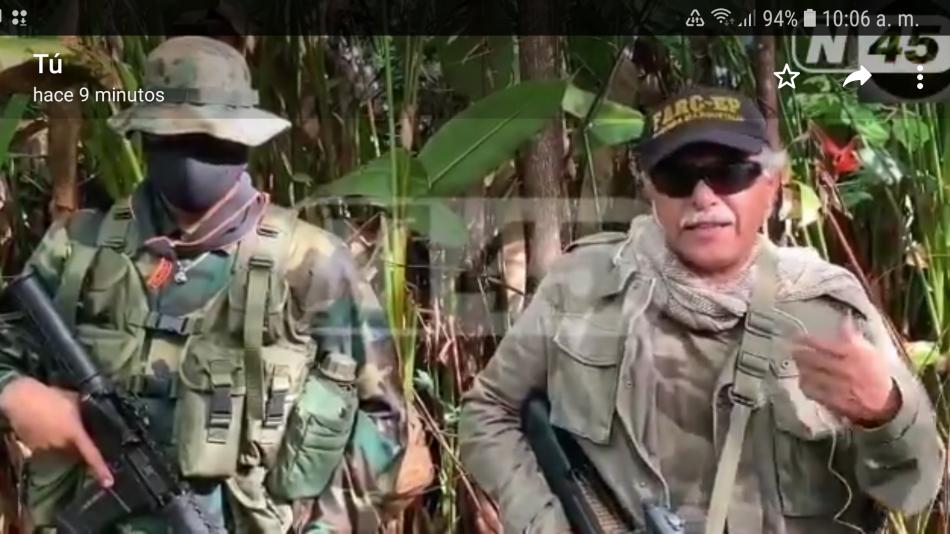 “I would like to express my gratitude to those who believed in us, despite that media offensive of lies without evidence that was unleashed; first against my name and status as a revolutionary, and then against Iván Márquez and other colleagues branded as drug traffickers.”

Thus begins the video (broadcast by N45) in which alias Jesús Santrich he thanks those who defend him from the drug trafficking case.​

(We invite you to read: Farc dissidents double their number of men in just 12 months)

The dissident is especially grateful to Roy Barreras for the debate he promoted on the alleged entrapment in the drug case.

His statements come after opposition congressmen (Roy Barreras, Iván Cepeda and Gustavo Petro) cited a debate this Thursday, in which they accused the Prosecutor’s Office of executing a ‘entrapment’ against Santrich, in the drug trafficking case for which he is being investigated.

(Further: The two accounts in Turkey and Greece in the name of the Farc)

In the debate, in the first commission of the Senate, former prosecutor Néstor Humberto Martínez was accused of being behind a covert operation: “Everything obeys a script to sow evidence with the intention of involving people from the Farc, who had made a peace agreement; in an alleged drug business “ Senator Gustavo Petro specified.

The accusations were rejected outright by former prosecutor Martínez.

And, in that context, the guerrilla, today in the dissidents ‘New Marquetalia’, explains his return to the mountain: “People who believed in us have our gratitude, especially those who understood the determination to take up arms again driven by institutional perfidy and other betrayals.”

(You may be interested in: What is La Piedrita, an armed squad that protects Jesús Santrich?)

With camouflaged and rifle in hand, he adds: “I would like to thank those who, trusting in our reasons, also believed in the reconstruction project of the Farc-EP. To thank Roy Barreras, who had no ideological identity with us, but dared with others to defend our innocence and act for the peace of Colombia. ”

Iván Cepeda was one of the summons to the debate.

And he continues to mention politicians: “Also to thank people like Iván Cepeda, Alirio Uribe, Piedad Córdoba, Álvaro Leyva, that they did not allow themselves to be intimidated or cornered, by those who tried to make them allies of the guerrillas, for purposes of war, when in reality, their real role was to be defenders of peace“.

(You may be interested in: The mighty weaponry in the photo of ‘Santrich’ and his gang)

The former senator Piedad Córdoba is described by the guerrilla as brave.

And it also refers to the intervention of the DEA if. “To those who accused us and repeated the false arguments of the gringos, and of a regime kneeling to the empire, eaten to the bone by escandals such as the political Ñeñe, or the links with Memo Fantasma, then we call them to reflect, to understand that with hatred and lies, it is our entire country that suffers the consequences of the conflicts that are raging. ”

See Also:  Human remains - including 2 decapitated heads - were found on a North Korean "ghost ship" that was washed ashore in Japan

Carrying the Tavor rifle, which he exhibited last September, the guerrilla assured that the commitment of this dissidence is, as the head of the extinct FARC, Jacobo Arenas, said, with the peace of Colombia.