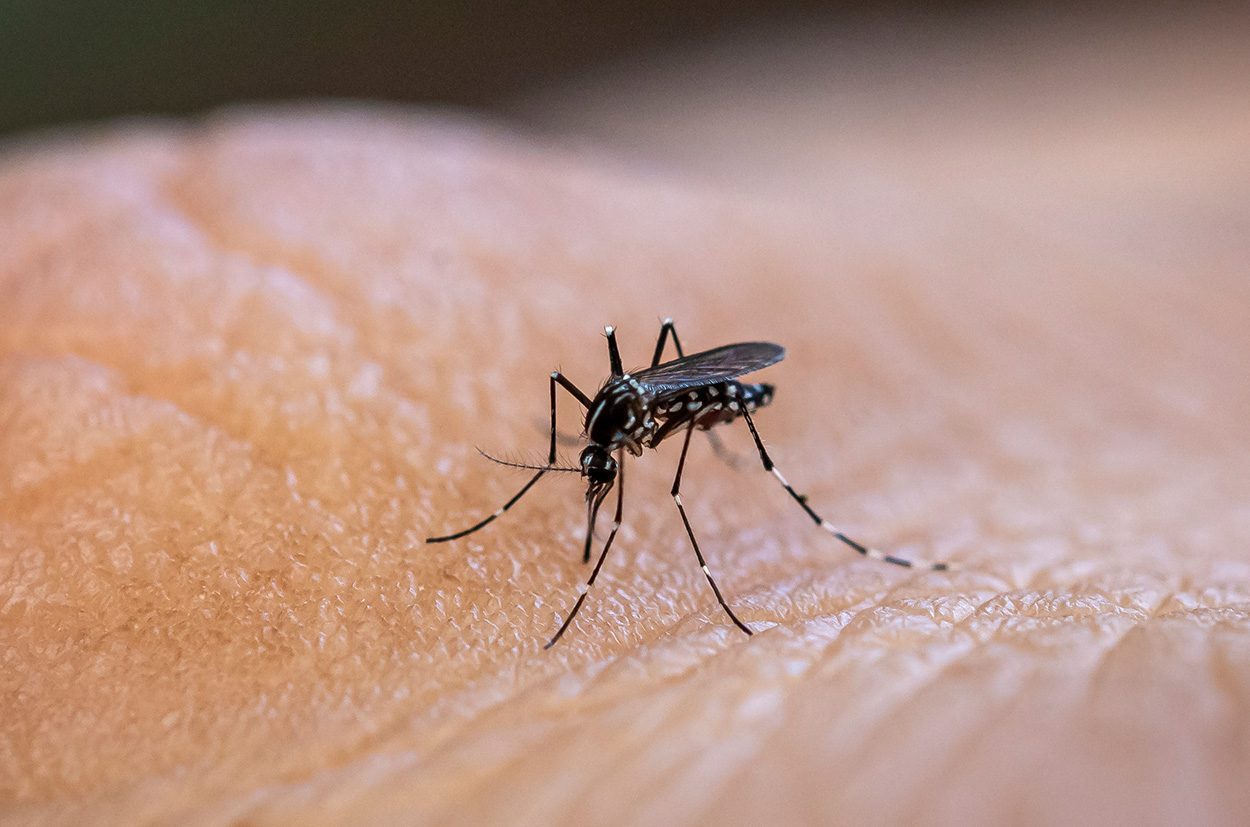 Viruses such as dengue and Zika viruses are spread by mosquitoes, which ingest the pathogens in human blood and transmit them to new victims. Researchers have now identified a mechanism that apparently helps the viruses spread: they change the microbiome of our skin in such a way that it produces more substances that make us smell particularly attractive to mosquitoes. A drug that is already being used successfully against acne could possibly help. In mice infected with the dengue virus, the drug successfully stopped the changes in the skin microbiome that attracted mosquitoes and ensured that the animals were not bitten more often than healthy conspecifics. Tests on humans are to follow.

In order to spread, so-called flaviviruses depend on being transmitted from person to person by parasites. One of the best-known representatives is the dengue virus, which is widespread in tropical areas worldwide and can cause fever, skin rashes and bleeding. Every year, more than 50 million people contract dengue fever and around 20,000 die from it every year. Other members of the virus family are the Zika virus, which can cause birth defects, yellow fever, Japanese encephalitis and the West Nile virus.

A team led by Hong Zhang from Tsinghua University in Beijing has now discovered a trick used by the viruses that apparently makes them more likely to spread: “We have observed that mosquitoes increasingly bite mice infected with dengue or Zika viruses are,” the researchers explain. Based on this observation, they analyzed the odor molecules on the skin of infected and healthy mice. And indeed: Certain odor molecules were more common in infected animals than in healthy ones. Zhang and his team tested the effects of these odorants by applying them to other mice and to the hands of human volunteers and observing how mosquitoes responded.

In this way, the scientists identified a molecule called acetophenone, which apparently provides a particularly attractive smell for mosquitoes. Using human dengue patients, they demonstrated that they also produce more acetophenone on the skin and thus attract mosquitoes. “Acetophenone is a volatile compound produced primarily by the skin’s microbiome,” the researchers explain. In healthy individuals, an antimicrobial protein called RELMα keeps the bacteria that produce acetophenone from overgrowing. “Infection with flaviviruses suppresses the expression of RELMα,” say the researchers. “This leads to the proliferation of acetophenone-producing bacteria and, consequently, high acetophenone levels.”

Acne Medication as a Remedy?

With this knowledge, the researchers set out to find a way to counteract this mosquito-attracting mechanism. From other medical applications it is known that a vitamin A derivative called isotretinoin increases the production of the antimicrobial RELMα in the skin. So far, the remedy has mainly been used to treat severe acne. Zhang and his team administered this drug to mice infected with dengue virus and placed them in a cage with mosquitoes, along with untreated infected mice and healthy animals.
The result: The dengue mice fed with the drug were not bitten more often than their healthy counterparts. “Dietary administration of isotretinoin to flavivirus-infected animals reduced acetophenone shedding by remodeling the resident bacteria on the host’s skin,” explains Zhang’s colleague Gong Cheng.

This could open up opportunities for infection prevention: If infected individuals are bitten less, this reduces the chances of spreading the virus and could help curb the spread of dengue fever. “In the future, we also want to test the dietary administration of isotretinoin preparations in human dengue patients. In this way, we hope to reduce acetophenone-mediated mosquito activity,” says Cheng. The researchers also want to address the problem on the mosquito side. “We plan to identify specific olfactory receptors for acetophenone in mosquitoes and remove the genes from the mosquito population using gene drive technology,” explains Cheng. The genome of the animals is edited with the help of gene scissors and changed in such a way that all offspring inherit this gene change. This accelerates the spread of the genetically modified form in a population – and could make the mosquitoes odor-blind to the virus-induced attractants.