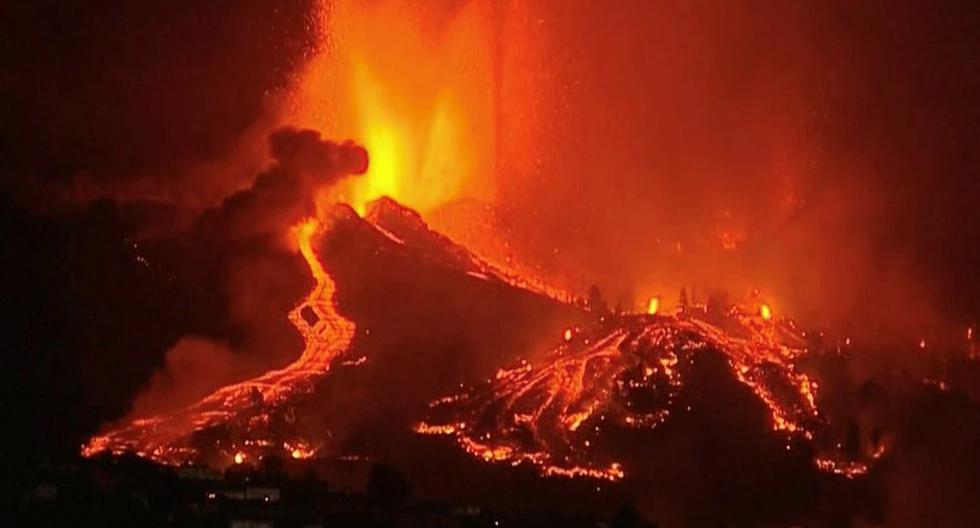 More than 5,000 people have been evacuated, hundreds of them tourists, due to the eruption this Sunday of a volcano on the Spanish island of La Palma, one of the most active volcanic complexes in the Atlantic archipelago of Canary Islands, after a week in which thousands of earthquakes accumulated in the area.

The volcanic eruption, which began in the municipality of El Paso, has not caused personal victims, but has caused damage to at least eight homes, According to the president of the Cabildo, Mariano Hernández Zapata, who nevertheless acknowledged that the advance of lava flows towards the coastal areas is worrying, due to the material damage that it may generate.

For his part, the President of the Canary Islands, Angel Victor Torres, explained that, at this time, no more evacuations are planned than those that have already been carried out, which have affected some 5,000 people, most of them housed in second homes.

The eruption has two fissures, about 200 meters apart, and eight mouths through which the lava emerges., has explained the technical director of the Canary Islands Volcanic Risk Prevention Plan, Pevolca, Miguel Ángel Morcuende.

The lava has already entered the municipality of Los LLanos de Aridane when crossing the LP2 highway, said Morcuende, who specified that, according to simulations carried out by the National Geographic Institute, the lava is directed towards the nuclei of La Bombilla and Puerto Naos, on the coast.

#LAST HOUR | The Cumbre Vieja volcano on the island of La Palma erupts. The Volcanological Institute of the Canary Islands has collected the moment of the eruption https://t.co/8uFZ7WD3Nv pic.twitter.com/6GPMpeognr

The new volcano that will emerge from the eruption could contain between 17 and 20 million cubic meters of magma, according to the Canarian president.

#International????: ???????? | Cumbre Vieja volcano on the Spanish island of La Palma erupted, activating all security and evacuation protocols in the area. #RadioPanama pic.twitter.com/dTNSk2cIvm

Torres has assumed that the volcano “It will continue to erupt“, Although” everything suggests “that there will be no new eruption points, perhaps” some fissure “more.

A few hours before the eruption, the authorities had begun to evacuate residents with mobility problems in the municipalities, five in total, located in the areas closest to the volcanic area.

The volcano that has erupted has at least eight mouths, and abundant lava is pouring from two of them in the direction of the populated areas of Alcalá and Paraíso, which has already been evicted, according to local authorities.

NO ESTIMATES OF HOW LONG THE ERUPTION WILL LAST

Technicians analyze the evolution of the eruption and the data collected to make predictions of where the magma could advance, although It is not yet possible to determine how long the volcanic activity will last.

The next evacuations depend on this, if necessary, the president of the Cabildo de Las Palmas, Mariano Hernández Zapata, told Canarian television.

“Let’s hope that the lava respects, that it is benevolent and goes to the coast, causing the least possible affection”, wished the island leader, who called for “responsibility and common sense” so that the area of ​​the eruption is not visited so as not to hinder the eviction efforts.

In addition, it has been recommended as a preventive measure to avoid flights to the island, according to sources from the gestures of Spanish airports informed EFE, although air traffic is not closed.

Until The Palm the President of the Spanish Government has moved, Pedro Sanchez, who has postponed his trip to the United States to attend the UN General Assembly in New York, as he himself confirmed through Twitter.

Sánchez has subsequently appeared before the media after participating in a meeting of the Special Plan for Protection against Volcanic Risk of the Canary Islands (Pevolca), convened after the eruption of the volcano in the area of ​​Cabeza de Vaca, in the Cumbre Vieja complex. .

In a statement to the media, Sánchez made “a special mention to the contribution of science”, which has allowed an anticipation of the response and a deployment of the national Civil Protection system to “face any type of contingency.”

THE FIRST ERUPTION IN 50 YEARS

Since September 11, the National Geographic Institute and the Volcanological Institute of the Canary Islands have been registering a significant accumulation of thousands of small earthquakes in the vicinity of the Old Summit, with foci that began at a depth of more than 20 kilometers, but progressively rose to the surface.

Since the beginning of the week, the island had a yellow traffic light due to volcanic risk in that area (level 2 of 4).

The volcanic traffic light, as a warning system for the population, is based on four levels depending on the risk: green, yellow, orange and red. Yellow indicates the possibility that the volcano could affect the population.

Since there are historical records – since the conquest of the Canary Islands in the 15th century – La Palma has been the scene of seven of the 16 volcanic eruptions that the archipelago has experienced.

The Old Summit it is one of the most active volcanic complexes in the Canary Islands. Two of the last three eruptions recorded on the islands have taken place here, the San Juan volcano, in 1949, and the Teneguía, in 1971.

Today’s eruption occurred 50 years after the last one, which took place from October 26 to November 18, 1971, and which caused a victim by inhalation of gases.

The first volcanic eruption on La Palma dates back to an unspecified date between 1430-1440, according to the National Geographic Institute (IGN), and occurred on the island’s Tacande volcano or Montaña Quemada.

La Palma, like the rest of the Canary Islands, is an island of volcanic origin. With an estimated geological age of two million years, it is one of the youngest in the archipelago.

Some of the victims of the September 11, 2021 attack on the Twin Towers of the World Trade Center in New York reached out to communicate with their families, friends, journalists and emergency services, unaware that their voices would be recorded for posterity.