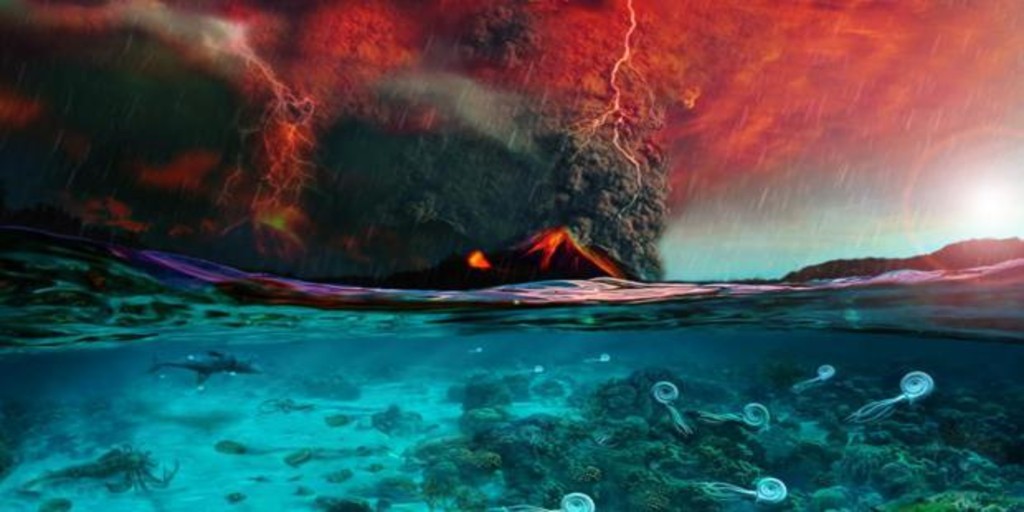 The mass extinction At the end of Triassic that wiped out 76% of Earth’s species began after a volcanic eruption spewed CO2 into the atmosphere, cutting off the carbon cycle and causing a chain reaction of environmental events. That carbon alteration led to acidification of ocean waters, which later affected delicate marine ecosystems and led to other unfavorable planetary changes. This is the conclusion recently reached by researchers at Curtin University, who have studied molecular fossils and report their results in a new study published in « PNAS».

The team analyzed biomarkers extracted from rocks collected in the UK’s Bristol Channel and found evidence of microbial mats, a kind of “carpets” made up of complex communities of microorganisms that serve to understand the biological changes that occurred in the past.

‘Through our analysis of the chemical signature of these microbial mats, in addition to looking at sea level change and water column markers, we discovered that the late Triassic mass extinction occurred later than previously thought », States in a statement Peter Fox, from the WA-Organic and Isotope Geochemistry Center and lead author of the study in a release.

The reign of the dinosaurs begins

About 200 million years ago, the Triassic period came to a devastating end after violent volcanic eruptions began by fragmenting Pangea and emerge the Atlantic Ocean. As carbon dioxide was released into the atmosphere, the Earth’s carbon cycle was disrupted and the oceans acidified. The delicate marine ecosystems collapsed and a great number of prehistoric creatures like conodonts and phytosaurs became extinct; But somehow dinosaurs, pterosaurs, mammals, and some plants managed to survive. This new world allowed dinosaurs to expand their ecological niche and reign supreme for the next 135 million years.

Fox states that previous research suggests that the extinction took place where we now know microbial mats flourished, but that the chemical signatures left behind by these ancient beings complicated the rock record, leading to confusion of dates and places where the mass extinction began. For his part, the co-author Kliti Grice, also a researcher at the University of Curtin, explains that the first isotopic changes observed in the rocks on which previous studies were based, do not actually coincide with the global extinction event, since they indicate that these changes were first produced locally in the European basins, to spend time later to become a global phenomenon.

“The mass extinction stage must have occurred a little later, along with the extinctions of land plants, toxic levels of hydrogen sulfide, and ocean acidification driven by massive volcanic activity related to the opening of the Proto-Atlantic Ocean,” he says . It is currently unclear exactly how long after the mass extinction occurred. Grice indicates that the new data would require reinterpreting the carbon isotope record, in order to gain a better understanding of regional and global effects.

Learning from the past

Grice says the research findings not only present a new theory of what started the final Triassic extinction, but also provide a kind of warning for potential future mass extinctions on Earth.

“Our recent research shows that microbial mats played important roles in various mass extinction events, as well as a role in preserving life remnants, including the soft tissues of dead organisms, in rare circumstances,” says Grice. Knowing more about the levels of carbon dioxide present during the mass extinction at the end of the Triassic provides us with important details that could help protect our environment and the health of our ecosystems for future generations. “