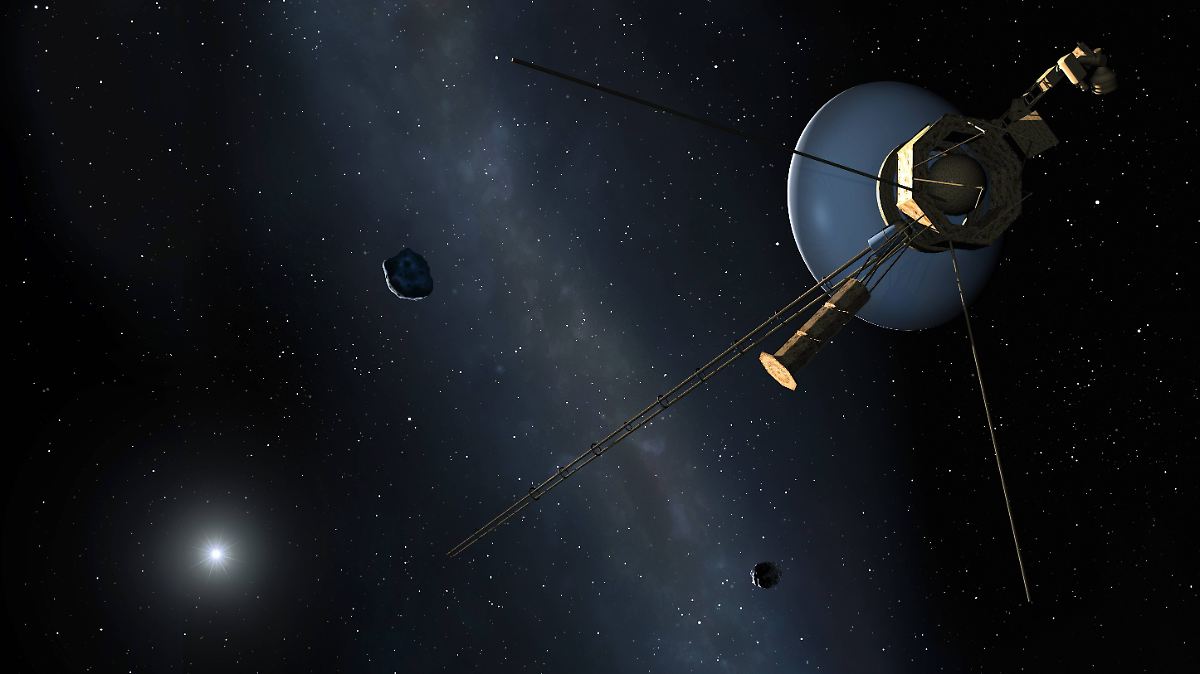 Already 45 years in space
“Voyager” probes have exceeded every limit

The “Voyager” space probes have now been on the move for around 45 years. Today they are the furthest man-made objects from Earth and have long penetrated previously unexplored regions. But now they are beginning to weaken.

Far, farther, “Voyager”: Man-made objects have never traveled as far from Earth as these two Twin probes from the US space agency NASA. “Voyager 1” and “Voyager 2” have been on the road for around 45 years. Both have since left the Sun’s heliosphere and entered regions never before explored by a spacecraft.

But the longest journey in space history seems to be nearing its end: Although both unmanned probes are still flying and continue to send data, the responsible NASA scientists have already switched off several instruments on board in the past three years in order to stretch the remaining energy . The power of the probes is decreasing year after year – and the engineers have to adapt to it. To do this, they often have to read documents that are decades old or contact NASA engineers who have long since retired.

With “Voyager 1” the scientists are also currently struggling with a data problem. Although the probe seems to be working normally, the control system shows completely different data. “Such a mystery is not a surprise at this point in the mission,” said lead scientist Suzanne Dodd. “The probes are both nearly 45 years old, much longer than the mission’s planners ever anticipated. And we’re beyond the Sun’s heliosphere — a high-radiation environment no spacecraft has ever flown in. So for the engineers, there’s big challenges.”

Originally, the “Voyager” mission (in German: traveler) of the two “cosmic high-flyers”, which is considered one of the most successful ventures in the history of NASA, was designed for four years. “Voyager 2” was launched on August 20, 1977, and its twin sister “Voyager 1” shortly thereafter on September 5, 1977.

Both probes, each weighing around one ton, had a rendezvous with Jupiter and Saturn, “Voyager 2” visited Uranus and Neptune. The probes also studied almost 50 moons. The pair sent stunning photos of Jupiter’s atmosphere, active volcanoes on Jupiter’s moon Io and Saturn’s rings.

As a foresight, the probes were equipped with back-up systems from the start. The “Voyager” duo is operated with long-life plutonium generators.

“Voyager 1” is now more than 23 billion kilometers from Earth, further than any other spacecraft, while “Voyager 2” is around 20 billion kilometers. In 2012, Voyager 1 became the first spacecraft in human history to leave the solar system. Thanks to its earlier launch, Voyager 2 is the longest continuously operated spacecraft. In 2018, “Voyager 2” also left the heliosphere of the sun.

However, there are various definitions for the boundary of the solar system. It is often equated with the edge of the heliosphere, a kind of bubble in interstellar space that is largely formed by the solar wind. According to other experts, the boundary is further away and lies behind the so-called Oort Cloud, a collection of small objects that, despite the immense distance, are still under the influence of the Sun’s attraction.

music in the bag

“Our energy budgets are getting tighter, but our team assumes that we can do science for at least five more years,” said the probes recently via short message service Twitter. “Maybe we’ll be able to celebrate our 50th anniversary or even function into the 2030s.”

Even if they fall silent, the probes will not stop flying. They are currently traveling through the Milky Way at around 61,000 kilometers per hour (“Voyager 1”) and around 55,000 kilometers per hour (“Voyager 2”). The “Voyager” twins have with them on data carriers music by rock ‘n’ roll legend Chuck Berry, as well as classical music by Bach, Mozart and Beethoven, as well as sounds from countries such as Australia, Bulgaria, Japan and Peru and 115 images and greetings to possible extraterrestrials in 55 different languages.

“It’s hard to see the end coming,” scientist Alan Cummings, who has been tracking the probes for decades, told Scientific American. “But we did outstanding things.”

towards the end of low cost airlines? “A plane ticket at 20€ today is a fiction”

“I exceeded the limit”: Téo Lavabo makes his mea culpa after his inappropriate behavior towards a fan