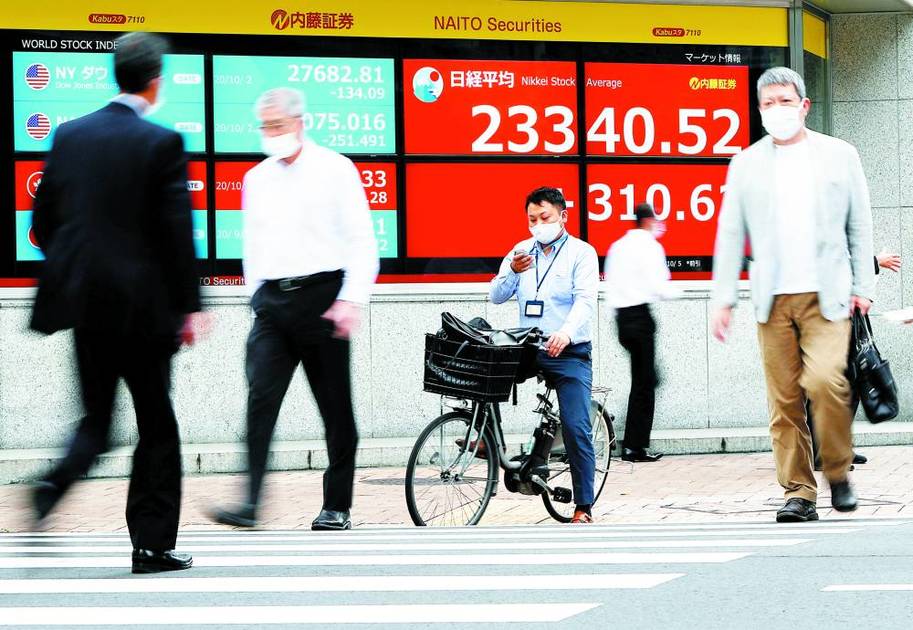 The three main US stock indexes ended the trading session, yesterday, Monday, sharply lower, and the Standard & Poor’s 500 and Nasdaq indexes suffered the largest one-day loss in percentage terms since mid-May, after a jump in infections with the mutated “delta” strain sparked a wave Massive sales on Wall Street yesterday, Monday; Investors fear renewed closures related to the “Covid 19” pandemic and the faltering economic recovery.

The Dow recorded its worst day in nearly nine months. Investors’ aversion to risk also pushed the 10-year US Treasury yields down, dragging with them interest-sensitive bank stocks.

European shares stabilized on Tuesday, after experiencing their worst sell-off of the year, buoyed by positive earnings reports from a few companies and production updates from miners.

And the Swiss bank UBS gained 4.6%, after it achieved a 635 jump in net profit in the second quarter, supported by the boom in wealth management activities. Its counterpart, Credit Suisse, rose 1.8%. Among the losers, Swiss “AB Volvo” shares fell 3.6% after it warned of more disruptions and production halts this year due to a shortage of chips.

The worst European session in 2021

The European stock market fell more than 2% on Monday, in its worst session in nine months, on concern that the rapidly spreading mutated “delta” strain of the Corona virus could slow the global economic recovery.

Shares of commodity-related companies, banks and travel companies fell more than three percent, and the indexes of oil companies and travel and leisure companies hit their lowest levels since February.

Extending its losses from last week, the pan-European Stoxx 600 index closed down 2.3%, with all its sectors declining.

The British FTSE index fell 2.3%; The increase in coronavirus infections has cast a shadow over optimism about reopening the economy in England.

With government bond yields continuing to fall, bank shares recorded their worst session in ten months, while mining stocks were hit by the decline in industrial metals prices.

Shares of major oil companies, such as “BP, Royal Dutch Shell and Total”, fell between 3.8% and 4.7%, affected by a sharp decline in crude prices after the ministers of the “OPEC +” group agreed to an increase in supplies starting from August. .