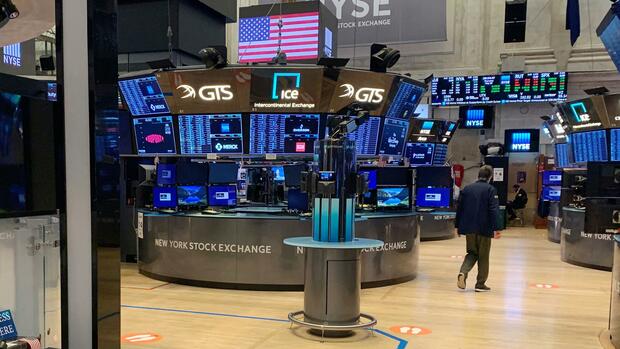 Frankfurt, New York Increasing US-China tensions over Hong Kong unsettled Wall Street investors on Friday. US President Donald Trump announced at a press conference in Washington that he would instruct his government to initiate the lifting of Hong Kong’s special treatment.

However, he did not mention any steps that might indicate an end to the troubled agreement between China and the United States to ease their trade conflict. After all, that did provide some relief for investors, said analysts

In addition to the tensions between the United States and China, bad economic data is dampening investor sentiment. In April, US consumers cut their consumption more than ever because of the corona crisis.

They spent 13.6 percent less than the previous month, the U.S. Department of Commerce said on Friday. There has not been a major minus since the start of statistics in 1959.

Because of the crisis and the drastic rise in unemployment, the Americans preferred to put money aside: the savings rate climbed to 33.0 percent after having been at 12.7 percent in March. Income rose 10.5 percent faster than ever because millions of Americans got $ 1200 each from the state crisis package.

The world’s largest economy shrank at an annual rate of 5.0 percent in the first quarter. Most experts assume that the slump in the current second quarter will be much clearer. Consumption points to this, since it accounts for more than two thirds of the gross domestic product.

See Also:  "The biggest black hole ever observed thanks to gravitational waves"

US merchandise trade also fell to its lowest level in a decade in April as the pandemic dampened demand and supply chains were disrupted. Exports of goods slumped a quarter in April compared to the previous month, the largest decline in records since 1989, according to data released on Friday by the Department of Commerce.

Imports fell by more than 12 percent, also the largest decline to date. In summary, the value of US exports and imports fell to $ 260.4 billion, the lowest since April 2010.

Fed chief Jerome Powell confirmed in a webcast that the central bank will continue to use its instruments in the fight against the economic crisis. “This is an emergency like we’ve never seen before,” said Powell.

The dollar index made up for its losses at 98.40 points. The Federal Reserve had cut its key bank money supply to zero to 0.25 percent and launched trillion-dollar economic support programs.

The social media platform Twitter has issued a warning on one of the recent posts by US President Donald Trump. The tweet about the violence in the city of Minneapolis after the death of an African American glorified violence, the short message service said on Friday.

The president had only signed an order a few hours earlier to give online platforms such as Twitter less scope to act against individual content and users. The trigger was his outrage at the first fact check of one of his tweets. In it, the president claimed that absentee voting increases the risk of counterfeiting, which was classified as wrong in the Twitter fact check. The platform’s paper fell by almost two percent.

Shares of Salesforce gave in around 3.5 percent. The SAP competitor lowered its annual forecast due to the corona virus pandemic and is expected to make a loss of between six and four cents per share. The company that dominates the market for customer management software (CRM) has also become less confident in terms of sales.

Papers from Dell Technologies rose 8.9 percent to its highest level in three months. The technology group performed significantly better than expected in the first business quarter. Analysts predict that the manufacturer of single-user and mainframe computers could wrest market share from competitors in the Corona crisis.

More: This is how the trading day on the German stock exchanges went.