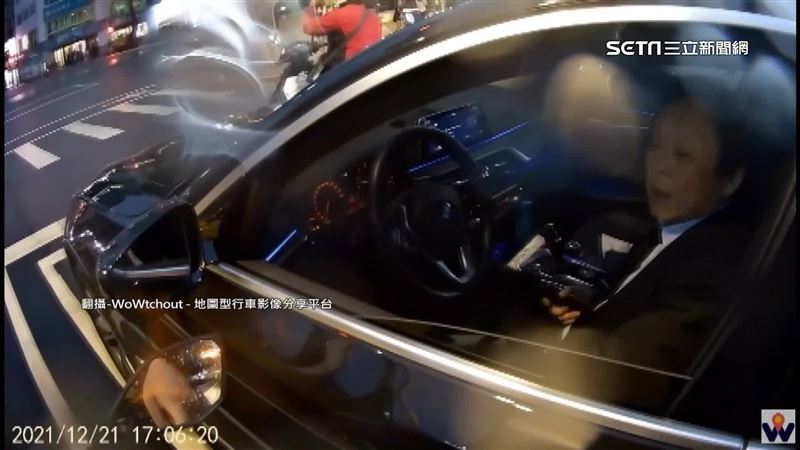 Xu Qiaoxin stopped the dispute, and Jiang Wanan and Hou Youyi, who were in the same party, kept a low-key attitude. Hou Youyi said that the administration was in accordance with the law, and Jiang Wanan was reluctant to talk about it. However, he is also a representative of public opinion. DPP Taipei City Councilor Wang Shijian was previously reported by the public for illegal suspension. Wang Shijian immediately apologized and paid the fine.

▲Wang Shijian stopped in the waiting area of ​​the locomotive and was knocked on the window by the public, and immediately pulled down the window to apologize. (Picture / Retrieved from WoWtchout – a map-based driving image sharing platform)

This was in December last year. Taipei City Councilor Wang Shijian was driving in the locomotive waiting area at the intersection and was knocked on the window by the public. He rolled down the window and immediately apologized. The police also said that he would issue a ticket. Before that, Wang Shijian’s car had also been towed by the police after illegally parked on the red line. Xu Qiaoxin had illegally parked and burned wildly. Wang Shijian’s illegal reaction was dug up on the Internet, and he praised “real man”.

People: “I think it’s more appropriate to act like Wang Shijian who just smiles and pays the fine.”

The public: “At least we have to set a more correct demonstration, that is, compared to…because public opinion representatives, don’t always play privileges, yes, it’s better to keep a low profile.”

PTT hotly discussed that Wang Shijian had done a correct demonstration of paying the ticket obediently. Compared with Xu Qiaoxin’s same red line parking, lawyer Huang Diying analyzed the contents of the secret recorder and pointed out the differences.

Lawyer Huang Diying: “She took off the mask and directly identified her as Xu Qiaoxin. She told the police directly that you’re going to drive, and then said it back. In fact, it is the power of the congressman that will cause pressure on the police.”

Wu Peiyi, Taipei City Councilor of the DPP: “If you don’t put pressure on it like this, of course it will put a lot of pressure on the grassroots. It makes people feel that it is habitual, are you using this kind of privilege?”

Taipei City Councilor You Shuhui: “Who hasn’t parked illegally? Who hasn’t received a parking ticket? Those who deserve to be fined will be fined, and those that should be paid will be paid. That goes up to the need to adjust the secret recorder, etc., and up to the pressure of privilege. I just find it ridiculous.”

Xu Qiaoxin’s illegal suspension has turned into a “suspicious cloud of pressure”. The mayoral candidate of Shuangbei, who is aiming for Bailihou, has a much low-key attitude.

New Taipei Mayor Hou Youyi: “We hope that this incident will be handled fairly and in accordance with the law.”

Reporter: “What do you think about the Xu Qiaoxin incident? Do you support Xu Qiaoxin?

Chiang Wan-an, the nominee for the Taipei mayor of the Kuomintang: “Alas, alas, be careful.”

When the secret recorder was exposed, Xu Qiaoxin emphasized the wrong demonstration of illegal parking and hurriedly apologized, but the political effect may continue to spread.

Gloria Camila, Ortega Cano and the Mohedano meet in Chipiona after the great controversies of the last year