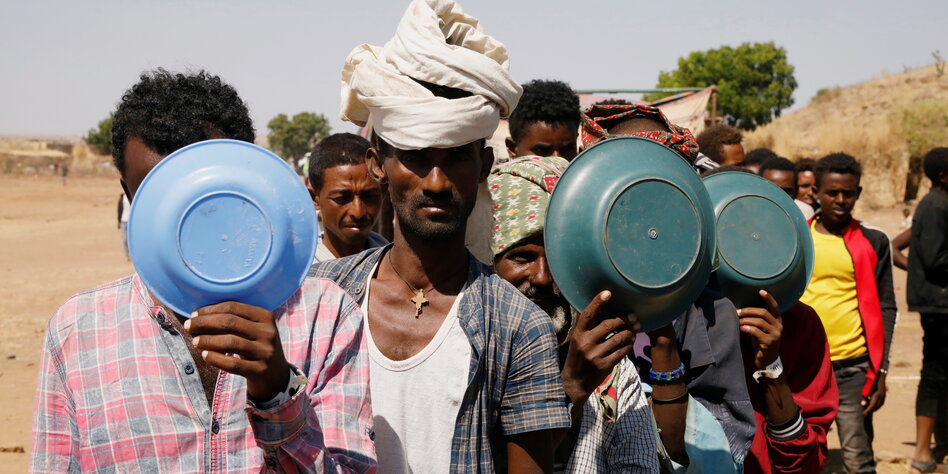 People who fled Tigray because of the fighting stand in line in a Somali camp Photo: Baz Ratner / Reuters

taz: Ms. Lemma, the telephone and internet connections to Tigray are cut. What do you know about the situation there?

Tsedale Lemma: Most of the reports come from human rights organizations, aid agencies and international journalists who report on the 43,000 refugees from Tigray in Sudan. So the situation is dire. There was a massacre in Mai-Kadra that left over 600 civilian deaths, and there are two versions of who committed the crime.

When Prime Minister Abiy Ahmed came to power in April 2018, there was joy and optimism, the term “Abiymania” was coined …

Yes, even we critical journalists were cautiously optimistic. At the same time, we were concerned because there were signs of a move towards one-man authoritarianism

is the founder and editor-in-chief of the Addis Standard newspaper based in Addis Ababa.

When did your “cautious optimism” change?

It only lasted a few months. Abiy always downplayed calls for a clear reform plan. It opened up political space, but there was no rule of law. There were no serious talks with the opposition. We always said: We have to talk about how elections should take place in this tense situation, because if you suddenly allow political freedoms after 27 years of hardship, you have to maintain order. That was the point where many Ethiopians realized that Abiy was going the wrong way. He did more to beautify Addis Ababa than improve the security situation.

In 2019 he received the Nobel Peace Prize for his peace agreement with Eritrea after two decades of hostility.

We never found out what these peace treaties entail. We critical journalists have said that the Ethiopian people should know and the treaty must be institutionalized. But that didn’t happen. The Ethiopian parliament never approved anything, Abiy also bypassed the Ministry of Foreign Affairs, it was a personal matter between Abiy and Eritrea’s president.

We hear of massacres and armed movements

Yes. Ethiopia has a multinational, federal constitution. But Abiy’s book “Medemer”, in which he outlines his vision for the future, is the opposite. The prime minister has repeatedly pledged himself to the multinational federation of Ethiopia, but his vision of state-building contradicts this. There is no autonomous region whose regional president was not appointed by Abiy – except for Tigray. Imagine Angela Merkel appointing the Bavarian Prime Minister to the Chancellery and telling him: Your cabinet must resign immediately. It looks like Abiy wants a centralized government in which his influence is unrestricted, and that goes against the Ethiopian state system as set out in the 1995 constitution.

We would like to show you some external content here. You decide whether you want to see this element too.

The ruling coalition EPRDF ruled for three decades, it won elections with over 90 percent and the TPLF from Tigray had a great influence, although Tigray only makes up 6 percent of the population. Wasn’t Abiy’s goal just a more representative tour?

You have to understand one thing: the EPRDF was hated. It was rotten inside. It was corrupt, authoritarian and brutal. It was necessary to break away from the legacy of the EPRDF, and so Abiy wanted to crush it. That is understandable, but also problematic.

In December 2017, before Abiy came to power, the leaders of all four parties in the EPRDF met for 17 days. They listed what should be done to save the EPRDF: release political prisoners, democratize politics, reform the judiciary, reform the security sector. Abiy was installed as prime minister to implement this reform agenda and lead the country to free elections. Instead, he opted for the abrupt smashing of the authoritarian party that had ruled the country with an iron hand. It destroyed the only political structure the country had in 27 years. You have to do this very carefully.

Abiy dissolved the EPRDF and founded a new ruling party, the “Prosperity Party” (PP). What was he aiming at?

Consolidation of power. The PP is meant to be a structure in which few people can control power from the center. However, the Ethiopians did not fight against the rule of power of the previous elites in order to see them replaced by elites from Abiy’s own ethnic group, the Oromo. In the meantime, the Oromo are still waiting for answers to their questions about jobs, self-government, the right to use their language as an official language, all of this remains unanswered.

Shouldn’t the PP allow a fairer representation of the different Ethiopian population groups?

Yes, and previously marginalized regions like the Somali region have been included. But that’s where it ended. There never was a founding party congress of the PP, there are no collective decisions. All of the party’s decisions come from Abiy’s office.

The TPLF did not participate in the founding of the PP. How much support does the TPLF have in Tigray?

Two and a half years ago I would have said: Your support is waning. The Tigrayers were dissatisfied with the way the TPLF had led the federal and regional governments up until then, the government was authoritarian, and Tigrayers were as dissatisfied as the rest of Ethiopia. But when Abiy came to power, he began to persecute the TPLF officials, while others who were at least as criminal were left untouched. The TPLF leadership became the target of the anti-corruption measures and said it would be scapegoated. She left Addis Ababa and settled in Tigray’s capital, Mekelle. That brought them closer to the people of Tigrays and deepened the trench with Abiy. It was a physical, and no longer just a political, alienation.

How did Abiy’s relationship with the TPLF get so bad?

There is a long chain of events. Sometimes one side is more belligerent than the other, sometimes both sides are uncompromising. And of course there is the rhetoric, the war of words, the fierce mutual accusations, all of which poisoned the political mood. The break came with the dissolution of the EPRDF and the establishment of the PP. Then Abiy canceled the long-awaited elections in Ethiopia because of Corona, and the TPLF held its own elections in Tigray. That was the point where there was no going back.

Yes, there are indications of state-sanctioned and social “ethnic profiling” by Tigrayers, not just the TPLF. We hear from people of Tigray origin in Addis Ababa and elsewhere, where the police show up at night and search their houses. Bank accounts are also closed for no apparent reason.

What has to happen now?

An immediate cessation of fighting is necessary. Each additional day complicates the conflict and intensifies regional rivalries. Sudan, which borders Tigray, is a state full of mercenaries and rulers with weapons that can operate across borders. Eritrea supports the Ethiopian federal government in Tigray. Tigray’s regional government is reporting drone strikes, and that may well be because the United Arab Emirates have a military base in Eritrea from which they launch drone strikes against the Houthi rebels in Yemen. In return, the TPLF shot at Eritrea. The war also makes Ethiopia internally vulnerable. The cohesion is torn apart, repression is noticeable again. We hear of massacres and armed movements in other parts of the country such as the south and west; the national army moved north has left a security vacuum. If this continues, the Federation will fall apart.