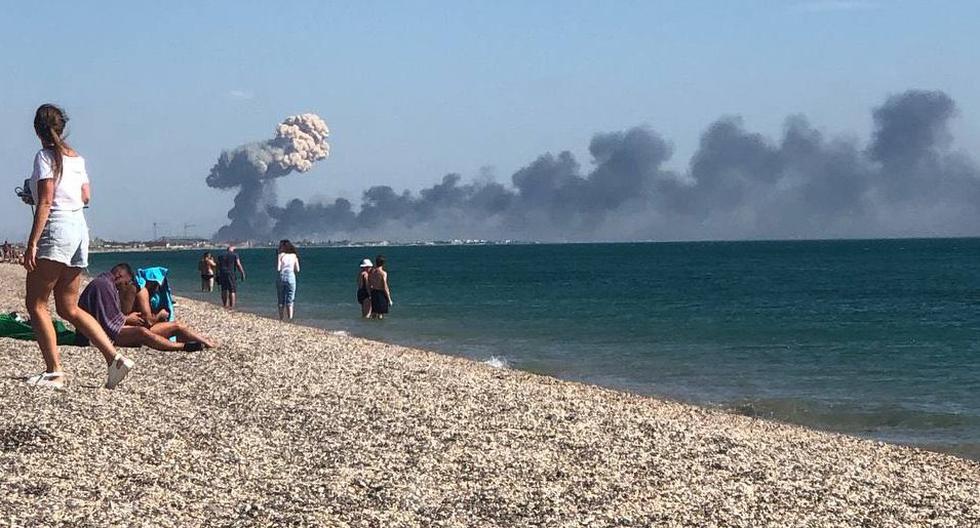 At least one person died and five were injured on Tuesday after several munitions exploded at a military airfield on the peninsula of Crimeaannexed by Russia, according to the authorities.

“Several ammunition intended for aviation exploded in a depot located on the territory of the Saki military airfield, near the town of Novofiodorovka,” the Defense Ministry said in a statement carried by Russian news agencies.

MIRA: How is Zaporizhzhia, the largest nuclear power plant in Russian-occupied Europe that is being attacked

The deflagration was not due to any shooting or bombing, the same source clarified, without specifying the origin of these explosions.

At first, the Russian army claimed that there were no casualties, but later, the Crimean leader, Sergey Aksionovreported that there was a deceased person.

“Sadly one person died. I express my deepest condolences to his family ”, Aksionov wrote on Telegram.

In turn, the local Minister of Health, Konstantin Skorupski, indicated that five people were injured, including a child.

Local authorities also indicated that 30 people were evacuated from Novofiodorovka.

Recorded videos, some of them posted on social media and taken from nearby tourist beaches, showed a plume of smoke. The videos could not be immediately verified by Reuters.

#9Ago #Ukraine #Russia
Another angle of the explosion at the Russian airbase at Novofedorivka in Crimea. pic.twitter.com/wjXFkKDtQZ
– @Alert_News_

At least 12 explosions of varying intensity were heard over the course of a minute, around 3:30 p.m. local time (12:30 GMT), two witnesses said. Three were particularly noisy, causing fire and smoke.

MIRA: The UN warns of a “very real risk of nuclear disaster” in Ukraine due to Russian attacks on the Zaporizhzhia plant

About 30 minutes later, another explosion, described by witnesses as the strongest of all, unleashed two more plumes of smoke and dust. In the nearby town of Saki sirens sounded.

The Russian Governor of CrimeaSergei Aksyonov said in a post on his Telegram channel that he went to the area and that “circumstances are being clarified.”

An adviser to Aksyonov confirmed that explosions had occurred but declined to comment on the possible cause, Russian news agencies reported.

Locals reported congestion on roads leading away from the coast.

Crimeaa peninsula of Ukraine annexed in 2014 by Moscow, is in the front line of the military offensive of Russia against its Ukrainian neighbor since the end of February.

Russian planes take off almost daily from the peninsula to attack targets in Ukraine and Several areas of Crimea are within the range of Ukrainian weapons and drones.

Despite the conflict, Crimea has remained a major tourist destination for Russians.

“Tourists are not in danger. We ask you to remain calm,” said an elected Russian deputy in Crimea, Alexei Chernyak.