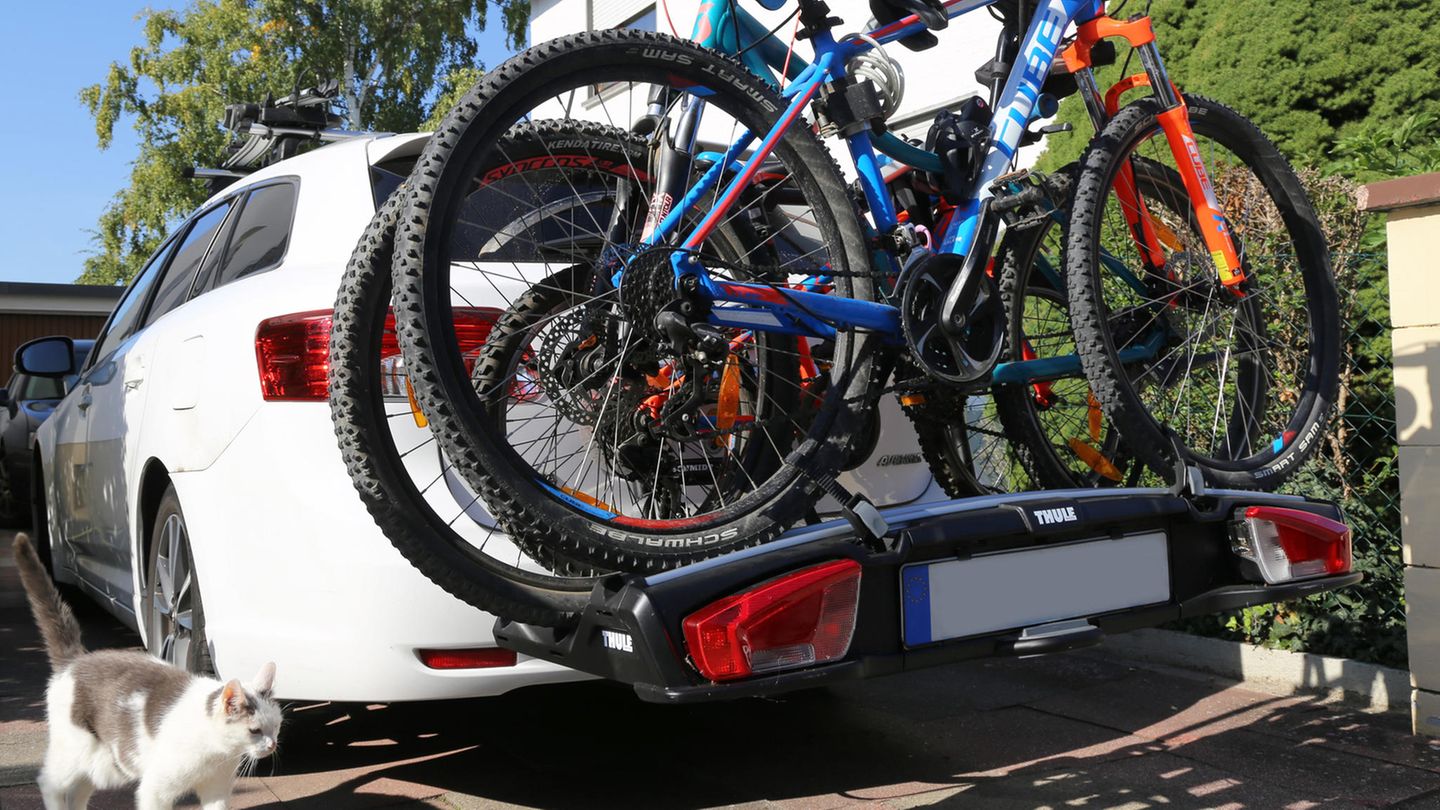 When testing wheel carriers for the trailer coupling, there was an unpleasant surprise. Even carriers for over 500 euros failed in the smallest accident. Only the Thule model is really top.

There are many ways to transport one or even several bikes by car. If you are not traveling alone or as a couple in a van, you will usually not be able to accommodate the wheels in the interior – you will need a carrier. The most popular are rear carriers for the tow bar. With them you don’t have to balance the wheels on the roof, the loading and unloading of the wheels is easiest and the carrier should also be quick to assemble.

Disadvantage: For this type of bicycle transport, the vehicle must have a trailer coupling. But the carrier fits on every car with a clutch. Unlike roof or rear racks, which can only be exchanged under very similarly constructed cars (read: “Bicycle transport – this is how you cycle on the motorway”)

The Stiftung Warentest has now taken a closer look at eight coupling carriers. All are foldable and can be lowered on the coupling to open the trunk. The bottom line: All candidates can simply transport a bike, but if it is to be safe, it will also be expensive. By far the safest and best carrier in the test comes from Thule. The EasyFold XT 2 achieved a “good” with 1.9. It costs a whopping 665 euros. The product testers write that it is particularly safe because the fastening elements are more robust. In addition, the experience of Thule is noticeable. The EasyFold XT 2 shines with the best handling, mounting on the coupling is easy. They are also good and noticeably cheaper at 450 euros Traveler mouth 2 and Eufab Premium II Plus. They also passed the crash test without any problems (read also: “ADAC tests bicycle racks – many are expensive, but only a few are good”).

But that was it with the recommendations. Incidentally, expensive prices do not protect against botch. Atera takes a proud 550 euros for the Varied road, but received a devastating “defective” like two other models. The three poor porters all went wrong with security. Without the expertise of the testers, the customer is faced with a difficult situation. Failure in the event of an accident cannot be assessed only visually. Incidentally, the test requirements were not high. A frontal collision at 30 km / h was simulated and the clutch grip came loose.

Carrier for only two bikes

Only carriers for only two bikes are being tested, families usually need one for four bikes. Then you have to pay attention to the vertical load. With e-bikes, you should remove the heavy battery before riding, if possible. All carriers in the test are foldable, so they take up less space to put them down. But the feature costs extra. A two-way carrier from Thule without a folding mechanism costs less than 400 euros instead of 665 euros – about that Thule Velocompact 924.

Stiftung Warentest – these are the best trekking e-bikes

The width of the wheels and tires is not taken into account in the test. Equipping them with e-motors has meant that some frames, but especially the tires of e-bikes, have grown significantly. Just like you know it from heavy mountain bikes. That leads to a safety plus on unpaved ground, the extra work is done by the engine. Anyone who owns bikes beyond the touring bike formats should take a close look at the dimensions of their wearer. Otherwise it can happen to him that the tire rubbers do not fit into the holder or the wheels are so “fat” that the frame parts hit against each other and then rub off the paint. In this case the best solution is to use a triple or quad rack for two bikes.

No more dropped chains and oily hands – is this what the next generation of bikes will look like?

Think about the vertical load

In general, the so-called vertical load of the car is important. The carrier itself often weighs over 20 kilograms – with a vertical load of 50 kilograms, only 30 are left for the wheels. That’s enough for two touring bikes as long as they don’t get too heavy. But be careful: a large SUV can handle a vertical load of 150 kilograms, but that does not mean that the bicycle rack with wheels can also weigh 150 kilograms. Because the weight of the wearer is different than a trailer coupling, the bar under the ball can tear.

You can do the whole test here for a fee here see.

ADAC tests bicycle racks – many are expensive, but only a few are good

Hitch Hotel – this pop-up box turns into a small caravan

Roof boxes at product test – only four are recommended, two burst in the crash test