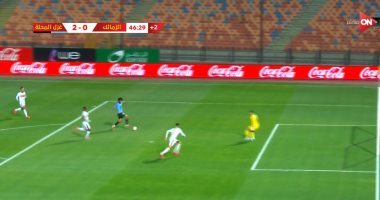 Ghazl El-Mahalla advanced over Zamalek with two clean goals in the first half of the match, which is currently gathering them at Cairo International Stadium, as part of the third round matches of the third group of the Egyptian Professional Clubs Cup, with the El-Mahalla team advancing with two goals without a response.

At the beginning of the half, the situation remained calm between the two teams, and the player was confined to the midfield area. After the 20th minute, Ghazal El-Mahalla dominated the match and launched more than one dangerous attack, threatening Mohamed Awad’s goal.

In the 33rd minute, Hisham Adel managed to score the advance goal for Ghazl El Mahalla, after a state of control and possession.

In the 35th minute, Ashraf Sayed, the player of Al-Mahalla, was alone with Mohamed Awad, and after evading the goalkeeper, he fell due to Awwad’s intervention.

In the 46th minute, Abdo Yahya scored the second goal for Ghazl El-Mahalla, after passing through the defense of Zamalek, to lead El-Mahalla over El-Abyad with two goals in the first half.

Zamalek is playing the match in a form consisting of..

Ghazl El-Mahalla will play the match with a formation consisting of..

Bro Daddy | How did Prithviraj disguise himself as a cop and bottle the producer? Video