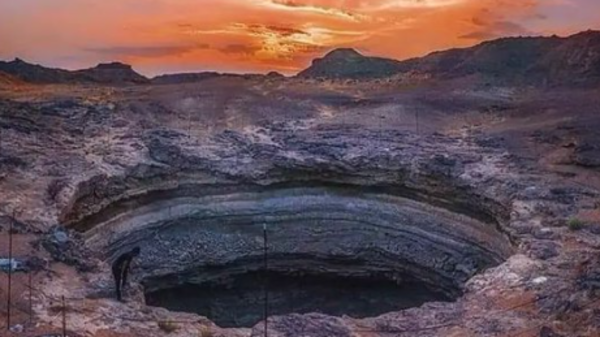 From the Cave of Hell to the Well of the Jinn and the Cave of Horror, there are many names and descriptions for the Barhout Well or “Fujit’s Effect” in Al-Mahra Governorate, east To whom.

Legends have long been woven around this great cave, which was shrouded in mystery, terrifying many for many years, and no one dared to enter it.

Until the “Omani Cave Exploration Team” decided to enter this deep cave whose circular mouth is about 30 meters in diameter.

It became clear that all the scary stories that were told about the Barhout Well have nothing to do with the truth.

The team members descended to the bottom of the well, according to what was published by the “National Geographic” account on Twitter, to explore and document its geological and environmental features.

And they discovered that the groundwater emanates from the cave walls to form beautiful waterfalls.

It was also found that many creatures take this place as their home, such as frogs, snakes and insects.

The team, in cooperation with the Geological Survey and Mineral Resources Authority and the Mahri Language Center for Studies and Research, documents Khesfit Fugit (or what is sometimes known as Barhut Well), during a visit to Al-Mahra Governorate in the Republic of Yemen, as part of his work to study caves. pic.twitter.com/094GSKaTEQ

It is noteworthy that the well borehole is located on the street leading to the Fugit area, which connects the cities of Shahn and Ghaydah in Al-Mahra Governorate. In addition, the well appears to be a prominent feature that is clearly visible from satellite images.

The width of its circular external opening is about 30 meters, and it is located between small plains and mountains, most of which are made of limestone, and a group of small waterways pours into it, according to the Omani website.

There is no doubt that it will be a tourist and environmental landmark in the coming days in the country.