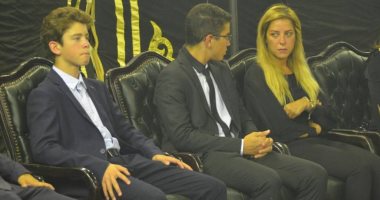 The actress was shocked Reem MustafaThe audience talked about her personal life for the first time during her meeting on the “A Last Word” program, presented by the journalist Lamis Al-Hadidi on the TV channel. ONWhere she revealed that she had previously married at the age of 19, and her marriage lasted 10 years, and she separated from her husband, and she has two sons, Omar and Ali.

This is the first time that Reem Mustafa talks about her marriage and the birth of two children, but what the public knows is that Reem appeared with her two sons Omar and Ali on one occasion only 5 years ago, specifically in 2017, in the condolences of her late father, where her two sons appeared next to her while receiving the duty of condolences. .

Reem Mostafa is currently showing her the series “The Eight” with the families of Yassin and Khaled Al-Sawy, written by Turki Al-Sheikh, directed by Ahmed Medhat, and co-starring Mohamed Alaa Jamica, Mahmoud Al-Bazzawi, Lara Iskandar, Munther Rayhana, Hanan Suleiman, and a special appearance by the star Ghada Adel, and the participation of a number of other The stars are guests of honor, and the work is shown on one of the digital platforms.

Reem is preparing to return to her artistic activity again in the coming days, as she awaits the resumption of filming her new series, “Dopamine”, consisting of 15 episodes, from which the first scenes were filmed before last Ramadan, and it was written by Muhammad Jalal and directed by Raouf Abdel Aziz and co-starring alongside Reem Mostafa. Muhammad Kilani, Basil Al-Zaro, Marwan Younes, Tiam Mostafa Qamar, Esraa Rakha, Bassant Shawky, and a number of other young artists.