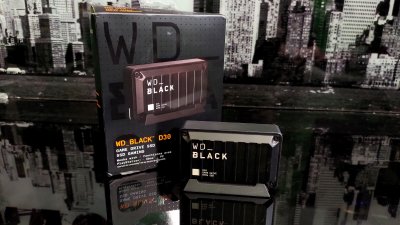 With the WD_Black D30, Western Digital offers three external NVMe SSDs of 512MB, 1TB and 2TB. The one we tested is the model with official 1TB of capacity, or 931GB actual. It is compatible with PlayStation 4, PlayStation 5, Xbox One, Xbox Series X | S consoles and of course PCs. The “D” in its name classifies it in the category of external desktop SSDs (Desktop). It’s a fun detail point for a storage medium with such a light and small case.

On the performance side, the WD_Black D30 is sold with a theoretical transfer speed of 900 MB / s as an argument.

True to the range WD_Black from Western Digital, le packaging de ce WD_Black D30 sports a classy appearance with a black background, stylized writing in orange for important points, white for everything else and above all a layer of selective gloss varnish on the photos of the SSD and the manufacturer’s initials (WD). Note, on the side a full size photo is displayed to show how small it is. All the important information is written on the gearbox (max speed, compatibility, contents of the gearbox, etc.) including the warranty period which is three years, i.e. one year more than required by law. A good point. The recommended prices are 99,99 € for the 500 GB, 169,99 € for 1 TB and finally € 319.99 for the one with 2 TB.

the WD_Black D30 has therefore kept the very military transport case design specific to this range, even if this time, instead of a hard drive, an MVMe SSD is integrated. In fact, the dimensions of the case are particularly small with measurements of 95 x 60 x 35 mm, but it is still bigger than what the competition offers. It comes with a clip-on foot to allow it to stand on a table without problem and without slipping thanks to its two non-slip pads. Its featherweight of 125 g (137 g with the stand) allows it to be transported quite easily without being cluttered or overloaded, but not in a pocket because of its thickness. The USB Type-A to USB Type-C connection cable is 50 cm long, which is more than enough for a portable external hard drive. Contrary to Seagate, and as always with WD, there is no supplied carrying case, which is a shame since this SSD is also aimed at a nomadic audience.

On the performance side, the WD_Black D30 is sold with as argument a theoretical transfer speed of 900 MB / s. In our tests, we subjected it to ATTO Disk Benchmark and the results are good, with a noted median speed of 888MB / s reading and 758MB / s reading, placing it at the top of the basket in its category. During our tests in “real” use, the results are more mixed. Indeed, when transferring large files, the latter starts well around 550 MB / s in writing before dropping after a few seconds to 222 MB / s, which is penalizing. For example, when we transferred the entire directory from Shadow of The Tomb Raider from our internal hard drive to the WB_Black P30, he will have took two minutes and thirty-five seconds, or “only” 235MB / s on average, which is not the best. Once in action, the SSD displays a temperature of 64 ° C, noted by our monitoring software as too high. However, once the file transfer tortures were over, it dropped back to 33 ° C very quickly. A priori, this should not be a problem since it seems intended for it. On the console side, it is compatible with the PS4 for storing games and data, but only for the latter with the PS5 (manufacturer source). On the Xbox One and Series X | S side, it can store games and data, and it works perfectly and quickly. With these, the SSD is plug’n play and by plugging it in, it is possible to choose between full formatting to install games or simply to use it for storage (videos, gameplay, screenshots, etc.). 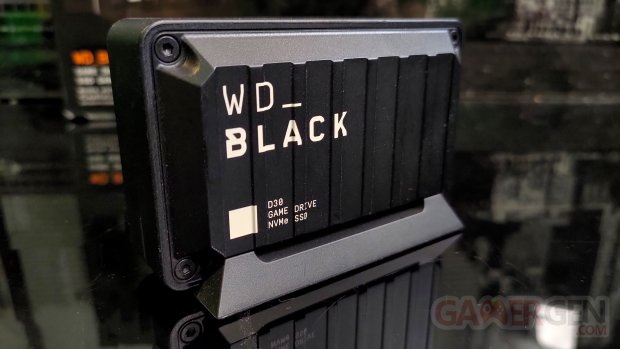 Finally, The WD_Black D30 is an external NVME SSD that offers an original look, a relatively small footprint for a desktop SSD and decent performance whether with consoles or PCs, as long as you have a latest generation USB port inside. Even if it does not fit in a pocket, it remains easy to carry and the absence of a protective pouch is a negative point which, added to a slightly high price, slightly downs the overall rating. However, we found the object really very pretty and it will seduce those who want a little originality and speed.