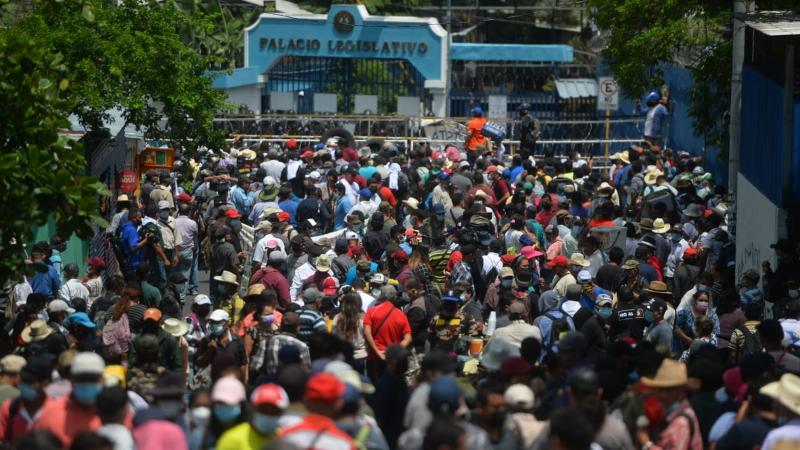 War veterans, unions, lawyers, judges and social organizations marched this September 30 against the laws approved by the Bukele bench in line with the Government.

“I think that going to a march like this is an exercise of our right to say that I do not agree and to accompany those who are also seeing the same thing, because in this way we are expressing our rejection of all expressions of authoritarianism that we are living in this moment ”. This was stated this Thursday by the president of the DTJ foundation, José Marinero, who joined the new march of organized sectors of civil society that concentrated this morning in the Plaza Divino Salvador del Mundo and headed towards the Legislative Assembly .

#Live | Judges, magistrates and civil organizations come to the Legislative Assembly in protest at the abuses of government power and demanding respect for the rule of law, respect for the separation of powers and judicial independence. More details: http://bit.ly/3zVHCgK

Posted by elsalvador.com on Thursday, September 30, 2021

War veterans, unions, lawyers, judges and social organizations were present at this activity, expressing their discontent against the reforms to the Law of the Judicial Career, the imposition of Bitcoin, the massive dismissals and the reform of the Constitution between other more reasons.

Marinero expressed some of the reasons for his attendance at the march: “In solidarity with the judges, with the colleagues whose rights are being trampled on by the Court, by the Assembly and by Bukele; and secondly, because judicial independence is not only for lawyers and judges but for all citizens, without judicial independence there is no way to maintain the use of rights ”, he stressed.

#EnVivo | Social organizations and judges and magistrates march towards the Legislative Assembly demanding respect for the separation of powers and judicial independence. More details: https://t.co/SpXCBpEn75https://t.co/m6zrJYgO2c

Cristosal’s legal chief, Ruth Eleonora López, also attended the march to highlight the importance of claiming the right to protest. “The protest is important, it is a form of freedom of expression and I believe that also popular expression in the street is a show of resistance and courage but also of the conviction of defending the rights of both human rights and rights. the rights of each of the people who are here claiming their own guarantees and their own rights, ”he said.

In addition, he explained that all attendees have a common denominator since no one likes or allows their rights to be violated, in that sense he said that “any person who feels violated because there is no institutionalized mechanism to claim and also with judicial independence or with legislative independence, then you have to claim in the street, that is your space. “

For his part, Stanley Quinteros, general secretary of the CSJ union denounced that checkpoints stopped the buses that were transporting people to participate in the march: “There are already several sectors, but we want to make a complaint that many buses are being held only here in the Constitution has several of us and that is a strategy to delay the people coming to this march ”, he pointed out.

Given this, Quinteros added: “He is not going to stop us, we will always go to the Assembly to present pieces of correspondence so that they can desist, for example, the reforms that were made to the Law of the Judicial Career, the Bitcoin Law that rejects it People, the issue of pensions, the veterans’ budget, the budget of the health sector and the education sector, we are going to defend against those 64 “push buttons” that you have in the Legislative Assembly ”.

Deterioration of the judicial body

Ricardo Canales worked in the Juvenile Measures Execution Court and is one of the judges who resigned after the approval of the reforms to the Judicial Career Law: “The purpose of my appearance at this demonstration is to pronounce ourselves for the violation of the Constitution and the rule of law, we are really in a dictatorship that is detrimental to the Salvadoran people, what we want is a return to the constitutionality of the country, “he said.

“I have already resigned, I no longer belong to the judicial body and I regret the deterioration of this body,” he concluded.