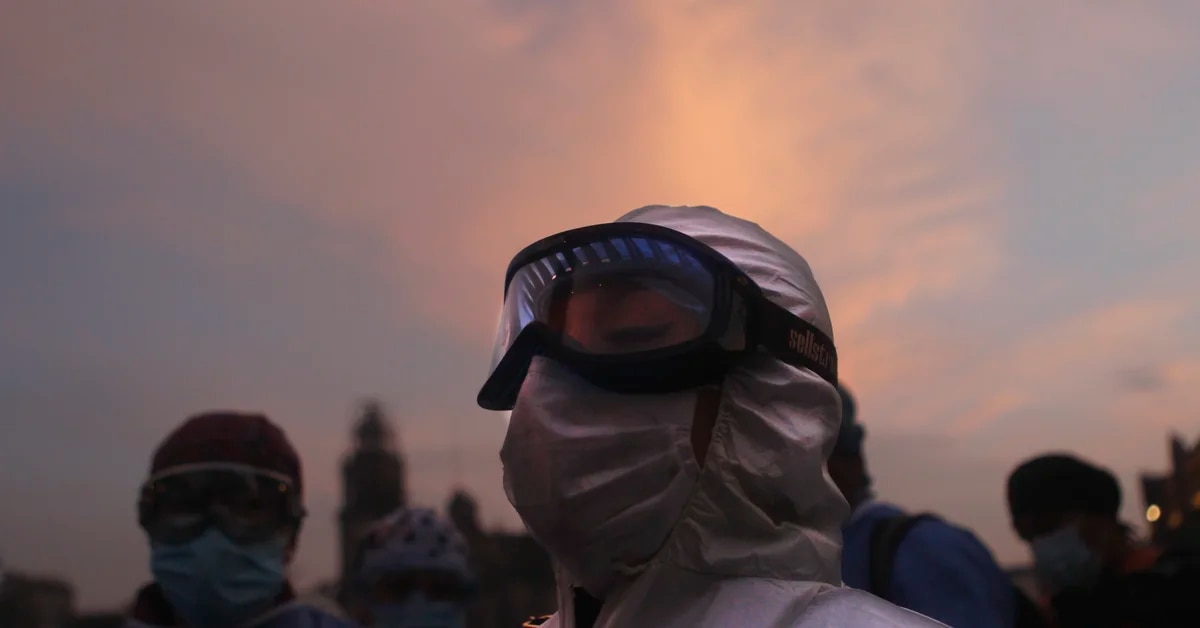 AMLO reported that his administration will hire 500 Cuban doctors to achieve its goal of guaranteeing health throughout the country 8Photo: Karina Hernández / Infobae)

Last Monday, May 9, the president Andres Manuel Lopez Obrador (AMLO) reported that his administration will hire 500 Cuban doctors to achieve its goal of guaranteeing health throughout the countrya decision that caused the polarization, once again, of the Mexican population.

And it is that with this action, there are already three times that the federal president has required the services of Cuban health personnel, because in 2020, the Government of Mexico City (CDMX) hired almost 600 doctors from the regime as part of the emergency plan in response to the COVID-19 pandemic.

At the time, the members of the National Action Party (PAN) denounced that the federal and state administration presumably hired Cuban professionals who did not have a college degree to support your experience.

In 2020, the Government of Mexico City hired almost 600 doctors from the regime (Photo: Cuartoscuro)

In response, the Secretary of Health of the CDMX (Sedesa) clarified that the 585 doctors hired by the capital government were accredited by the island’s Ministry of Health and were not “false”; likewise, he explained that the agreement with the Cuban regime included advice, organization and administration of health systemstraining to classify cases and patient care by healthcare professionalsin the regions and medical health units.

However, this year’s collaboration agreement between Mexico and Cuba in health matters has raised controversy because President López Obrador declared that in the country if you have a staff shortage even though there are hospitals to serve, above all, the Mexican population that lives in the most vulnerable areas.

Given this context, doctors and opposition figures they reproached the hiring of foreign health personnel, They assured that there are enough doctors in the country to achieve the objective of the chief executive.

“Mexico has no shortage of doctors. On the contrary, I believe that there is a lot of unemployment, more formal and well-paid jobs are required. It is a pity that in speech we are praised but in deed we are overlooked or minimized”, he pointed to Infobae Mexico the doctor and activist, Hector Rossete.

In an interview, the health professional recalled that the stay of the Cubans in 2020 did not bring any benefit to the country, because on that occasion it seemed that “It was a form of exploitation” and it was believed that “they were not even doctors”.

And it is that as detailed, to enter to work in a health institution it is necessary comply with a protocol, validate the studies, homologate the title and in certain cases, the study plans force them to recourse or study subjects in order to establish themselves in another country and take those studies to work life.

The health professional recalled that the Cubans’ stay in 2020 did not bring any benefit to the country (Photo: Karina Hernández / Infobae)

“That is what they are skipping and that is why one questions in what quality do they come, how are they going to help. Why don’t you get the contract from a Mexican doctor who is adapted, who is educated with the appropriate curriculum for the country in the health sector that is handled?

Likewise, he regretted that the administration of the so-called Fourth Transformation (4T) grants them more benefits than those that Mexican doctors have. “It is not fair that I give them the entrance like this because yes, there could be differences in study plans and strategy plansand that is not convenient,” he added.

The activist reiterated that the hiring of Cuban health personnel would not benefit the country, because on the contrary, “if we talk about the budget, it seems to me that it will be expensive for the country”.

Rossete indicated that the personnel of the Mexican health sector are not against foreign doctors (Photo: Yamil Lage)

Rossete stated that Mexican health sector personnel are not against foreign doctorsThey simply ask that the protocol to enter a position be respected and that preference be given to graduates of national universities.

“It’s not being against them, it’s just that there are protocols to follow and the preference should be for Mexicans(…) they should give us preference in this matter”

For her part, Dr. jackie lopezdirector and creator of the first agency specializing in health content in Spanish, Health in Shortsaid to Infobae Mexico than in the country doctors and specialists are not neededsince the main problem in the health sector is the lack of resources and “knowing how to distribute them”.

Dr. Jackie López said that the main problem in the health sector is the lack of resources and “knowing how to distribute them” (EFE/Francisco Guasco)

“What happens is that they are very poorly paid, there are no vacancies for the doctors, they don’t know where to ask for a job, they are not valuedThey are not given a fixed salary. It is very difficult to be able to maintain a profession, whatever it is, with these conditions”, he stated.

Like Rossete, López maintained that “no matter how many hands there are, the skills and teachings that Cuban doctors bring are very different to which the graduates have. Health professionals graduated in Mexico have very different skills”.

“Although they are very good in some areas of medicine, it does not solve what Mexico needs right now, that is, even if it is a cheap hand, so to speak, they are not solving the needs that Mexicans have and they complicate more than they help. (…) It is a serious mistake, a diversion and waste of strong resources that could be being used in other areas of health”

For the health professional, the country is not in a position to try foreign specialists and “be a guinea pig” (Photo: Karina Hernández / Infobae)

For the health professional, the country is not in a position to try foreign specialists and “be a guinea pig”, thereby risking resources and betting on “doctors who do not have the same capabilities as Mexicans at this time”.

Jackie López added that if the administration of the National Regeneration Movement (Morena) would have clarified that Cuban doctors are going to train Mexicans in certain competitions that they do not have, they would not have a negative reaction from the union, “but in this case the Cubans do not provide that service.”

Regarding medical care in marginalized areas, the doctor acknowledged that most doctors prefer to work in Mexico City because it is where the best equipped and specialized hospitals are located, thus neglecting other states of the Republic, in which, she pointed out, governments have kept health systems in awful conditionwithout inputs, trained personnel and “they do not bet on the safety of their workers”.

“Really what is missing are not doctors, in the end it is the distribution of resources and human resources. (…) There are no adequate working conditions for a doctor to carry out his work in places other than Mexico City”, he sentenced.

Mexican doctors protested against the hiring of Cuban health personnel: “They privilege foreigners”
Mexico will hire more than 500 doctors from the Cuban regime due to “lack of specialists”
The Cuban dictatorship expanded the sending of doctors abroad despite the fact that the island’s health system is collapsed by COVID-19

Gustavo Quinteros was called from La Roja: how much is Colo Colo asking for?

Russian ships with stolen grain are rejected at ports