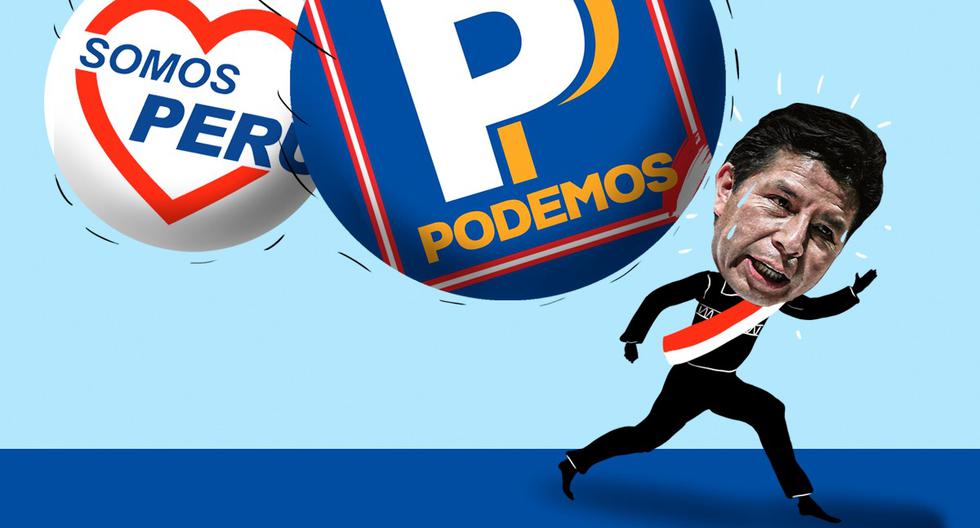 READ ALSO: We are Peru and Patricia Li. The secrets of the party founded by Alberto Andrade

Li Sotelo was on the fence about the vacancy issue. He did not support Patricia Chirinos’ rushed first motion, which was never even debated. He did, he agreed with his bench in supporting the admission to debate of the second motion; but, at the decisive moment, he promoted voting against her. Well, this time, since before the palace raid and the delivery of Yenifer Paredes, he already said yes to the vacancy and if Patricia says yes, the 16 members of his CEN (national executive committee) are aligned with that. The bench is wayward; but the Soma leadership assures that there will be a block vote.

How do I know this, if Li Sotelo does not give interviews or respond to the press? Because I asked Mario Fernández Garibay, general secretary of the party. He told me: “Yes, we support the vacancy and that is the idea of ​​the forces that we meet at the board of directors.” By the way, SP has lost its place in the third vice presidency, due to the double missteps of its militant Wilmar Elera. In addition to declaring a macho barbarity in defense of his former APEPist colleague accused of rape, Freddy Díaz, he was sentenced for aggravated collusion, derived from his participation as a supervisor in a sewage project in Piura in 2012. He asked for a party license and bench, before the Judiciary will order his capture. Instead, SP propuso a Hitler Saavedra, but withdrew it for the sake of the unity of the vacating coalition. Another member from Piura, Bernardo Pazo, former mayor of Sechura, will enter instead of Elera.

The suspicion of underhanded officialism of Somos does not dissipate only with votes. It intensified when Alejandro Salas was filed with the Ministry of Culture on February 1. He was a well-known Somista leader, who almost did not reach Congress with the drag that Martín Vizcarra achieved in Lima. The version given, in unison, by Salas and the party, was that it was a personal decision of the new minister, and that, as befits in these cases, he had asked the party for a license.

Of course, that version was hard to swallow. Now, after Salas’ letter of resignation, in which he states that he was proposed by the party, have had to come clean. Indeed, in January, Castillo made a call to participate in a new cabinet and the leadership of SP proposed Salas, with the agreement not to make it explicit. Shortly after –and I know from conversations with Somist sources- they repented when they saw him become inflamed with Castilianism. The bases could not stand him and demanded that the CEN expel him, which was agreed in June (we told it in “Do you want to be with Pedro?” from 6/27/2022), but they just decided to publicly order him to leave on August 1.

Upon resigning, out of sheer pique, Salas said that it had indeed been an overwhelmed proposal from the party to the cabinet. And he blamed other leaders for expelling him, implying that Li supported him. It’s not what my Soma sources tell me. They assure me that Patricia no longer wants her son Alejandro close to her and she wants to vacate Pedro because she doesn’t see a future for him.

Regarding the future, as I promised to tell, Doña Patricia has led another bold move, something new and reckless in the history of the broken heart (the symbol imposed by the founder Alberto Andrade is a heart, which has suffered with many lawsuits and turns). What has she done? Well, sign Esdras Medina, that he had resigned from Popular Renewal. Who is Ezra? Well, the ecstatic ultraconservative snatched who was snubbed by his caucus when he was negotiating to participate at the table with Lady Camones, after which he put together a plank with Peru Libre, the teachers’ caucus and the ‘Children’ of Popular Action.

The fundamentalism of Esdras stopped the hairs of the spokesperson Kira Alcarraz, a guest of the party that arrived in the share of Martín Vizcarra. Community pot leader, independent, liberal woman and enemy of the ruling party, she disagreed with her caucus in her semi-official phase. She was on sick leave when Elera was chosen for the table, and she resented not being consulted. She made peace and they gave her the spokesperson, which was a blow to Li Sotelo, who sensed that Alcarraz would oppose her decisions. In effect, Li’s proposals to occupy the spaces in the Permanent Commission and the Subcommittee on Constitutional Accusations were changed by Kira.

The Alcarraz’s spokesmanship was going to be untenable with Esdras, so he resigned and went to the new Integrity bench and Development, stops the collision course and takes a weight off Patricia. But why take on another enormous weight, with the pro-lifers? I got the answer by talking to a veteran Somalist. For SP it is a novelty to ally with evangelical sectors, but facing a future of early elections, it could be a salvation to jump the fence, as was the vacant Vizcarra. Patricia Li does not make thick stitches without thread. Of course, the resolution to vacate Castillo will not change with the evangelicals. Esdras temporarily allied himself with Peru Libre because he believed that his pro-life and pro-family agenda would be secure in Congress, but he has faith in the vacancy.

Podemos maintained the same underhanded support for Castillo’s continuity as Somos Perú. The president of the party, also congressman José Luna Gálvez, has much more political experience than Patricia Li. Before founding Podemos in 2018, he was a leader of Aprista bases and the gray eminence of National Solidarity. He became an education tycoon, converting his Telesup academy into a university and participated – according to ongoing tax investigations that have even included a request for preventive detention- in a complex network of influence peddling with tentacles in the former CNM, the ONPE and the judicial apparatus.

Someone who knows him well and does not relativize the charges brought against him by justice, describes him as a “brilliant politician to draw strategies”. I have no contact with Luna Gálvez or her son José Luna Morales, vice president of Podemos; but I have spoken with the Secretary General, Congressman Enrique Wong. He had given up the party and bench for a few days; but he has made peace, and from that new harmony with his group, he answered me when I asked him about the vacancy: “We secure 5 votes out of 6″.

What is the sixth of discord? Well, Rodolfo Zea, the former Minister of Agriculture teacher, investigated and acquitted for two murder cases, who was pulled by Podemos to complete the bench. Let us remember that the economist Carlos Anderson, a very independent character who advised the government plan of the Podemos presidential candidate, Daniel Urresti and entered the list at his invitation; he resigned and left them incomplete. Zea was, at that time, a lifeline to maintain the status of a five-member bench.

Why had Wong resigned? He was discreet when I asked, but I was able to piece together the reasons with the help of other sources. Wong has a fluid relationship with Luna Gálvez but not with her son Luna Morales or with another party leader, former congressman Yeremi Arón Espinoza, who is the husband of the current congressman and second vice president of Congress, Digna Calle. Wong had been sidelined from major decisions surrounding regional and municipal elections. They imposed candidates he didn’t know about and, annoyed by these and other slights, he waited until the board election was over and left. So upset was he with his co-religionists that he voted for another list, the one presided over by Héctor Acuña.

There is another reason, a congressman from another caucus points out to me, who knows Luna Gálvez’s calculations. The suspicions of selling votes for perks of the Executive had passed from Podemos in general to Wong in particular, caught in a report of “Panorama” as a frequent visitor to the MTC and having, presumably, influenced the appointment of an adviser from his office, Manuel Alberto Talavera, as president of Enapu’s board of directors. Wong has denied having any part in it, and he repeated it to me in our conversation; but he has been left with the aura of having been in deals with the government. Well, Luna Gálvez could have caused him to leave so that he absorbs the criticism and the bench gets rid of his bad image. But Wong returned to participate in the waste with the Luna dynasty and with the Espinoza Calle couple. Juan Burgos, the other congressman of the group joins the vacancy and together they hope to convince Zea.

Are y We can, are two microcosms of national politics: weak leaders, unruly benches with elusive guests, uneasy relations with the Executive, resounding resignations and possible friendships. The center, embodied by both, can be, in times of polarization, a sign of wisdom and maturity; but also of accommodations and relativism. However, at this point in the government of peter castlethe pair is decided by the ‘no more’ of the president.

Seven hundred million Shiba Inu coins have been burned. In the past week, an increase of 824%