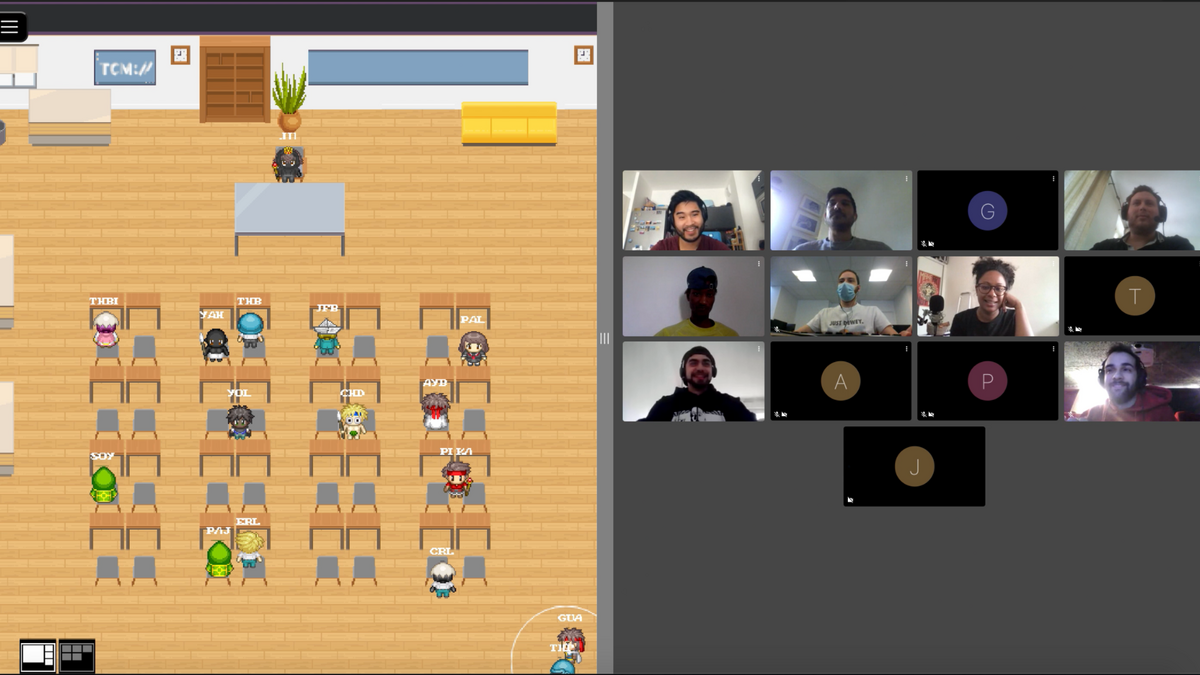 “We were tired of chaining Zoom meetings and not seeing each other at the office,” explains Grégory Rocher, CEO of WorkAdventure, a subsidiary of The Coding Machine, a French web and mobile development company.

Faced with the decline of links caused by teleworking, the co-founder has developed a product capable of allowing employees to find each other, but in a virtual universe. Inspired by video games, this web platform with retro design and 2D graphics offers several functions and interactions. Everyone can choose their desk, the color of the walls, the location of the coffee machine… up to their own avatar.

Take the example of Paul, an employee in teleworking. By clicking on the link on the platform, the employee can customize their outfit, skin color or even their hairstyle. Is it time for the coffee break? Paul joins his colleagues in the cafeteria or on the terrace, using the arrows on his keyboard. There, the rules of distancing are non-existent.

“It is not a tool for spying”

Paul approaches his colleague Julie and begins the discussion. The camera and the sound of his computer go off, unless he refuses. “There is no obligation, it is not a tool for spying,” says Grégory Rocher. If he doesn’t want to speak in front of the camera, Paul can also use instant messaging.

In full exchange with Julie, the new intern, Lucas, invites himself into the conversation. This is the opportunity to get to know each other better and to present him to the rest of the team. Be careful not to meet with more than four people, otherwise the avatars will have to join another meeting room.

If he wants to be calm, Paul can move into another room and cut himself off from any interaction with his colleagues. One of them behaves badly and insults his boss? WorkAdventure’s moderation tools will be able to ban it.

Thanks to its “open source” function, that is to say totally open, many functionalities can be added such as Internet links, documents or videoconferencing systems. Each universe is built from A to Z, in order to adapt to the different demands of companies.

Customers include Bouygues Construction International (a subsidiary specializing in complex building projects), Jellysmack (creator and distributor of video content) and Société Générale. For the Veepee event sales site, the offices have been reproduced identically. Its nine European subsidiaries were represented there and groups of employees are testing the platform before considering a global deployment.

In total, 4,000 organizations around the world use WorkAdventure. Since its marketing in February after nearly a year of development, more than a hundred companies have already subscribed to the paid version: five euros per month and per user, a preferential rate until the beginning of July. It is even possible to access the application free of charge for small groups of no more than fifteen people.

WorkAdventure is also used for certain corporate events. Zenika, an IT consulting company, wanted to mark its 15th anniversary. All employees were invited to celebrate this anniversary through the platform on April 23. A map of France has been reproduced there, with all its agencies in France. Employees were able to meet in different spaces, while following conferences led by virtual masters of ceremonies …

For a workforce of 400 people and for five days, Zenika paid 2,000 euros. According to Mathieu Mure, technical director of Zenika Lyon, “it is the best tool created so far to keep proximity”. Some agencies even continue to use the game every day and a new event will be organized soon to recruit new employees.

“We need to invent virtual places, to rethink offices and ways of working together,” said Grégory Rocher, who is counting on fundraising by the end of the year to support its development. . According to him, “most exchanges take place thanks to digital, so that the future of work will be hybrid, between physical and virtual offices”.