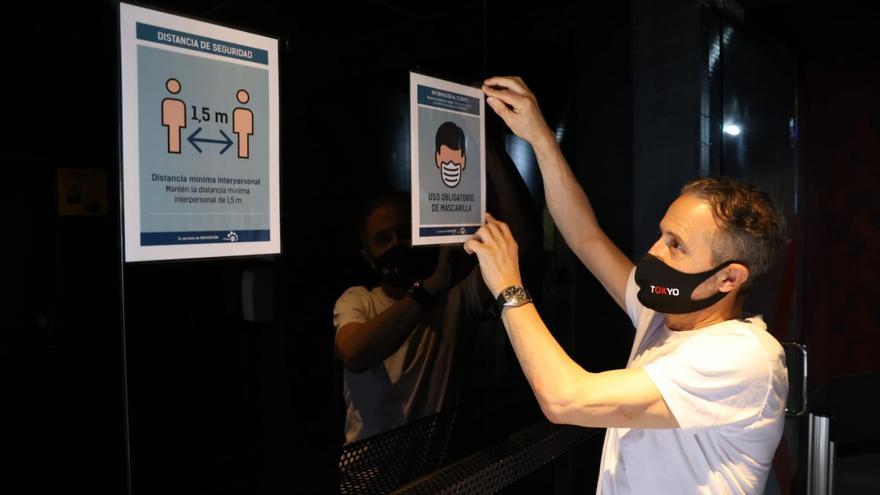 – Do you expect the assistants to behave?

– Totally, since, among other things, there will be security and a lot of control. They are going to behave well necessarily and obligatorily. I trust them 100%. Nightlife is safe, we will demonstrate it to society, to critical people who place us in the eye of the hurricane. Young people need to get out there and have fun. We will push all the rules to the limit.

– Do you know the ages and origin of the clients?

-Not. The steps to gain entry were telematic, so we do not have that information.

–What conditions must they meet within the premises?

–They must wear the mask correctly at all times and maintain interpersonal distance as much as possible. Together with the capacity, they are the aspects that determine this test. The drinks will be served as usual, in the bar, and there will be dancing. If a client arrives with symptoms of drunkenness, we will not let them pass: it is what has always been done, with and without a pandemic.

– How will these rules be controlled?

–As we did last summer: both the security personnel hired by the nightclub and the waiters will be in charge of supervising. If, for example, they see someone without a mask and not drinking at the time, they will be struck. If you ignore, you will be fired from the premises.

“If a client arrives with drunken symptoms, we will not let him pass: it is what has always been done”

– How many people will work that day?

– Around a dozen. There will be four waiters; the rest, security. I remove the four waiters from the ERTE (temporary employment regulation file) during the four hours that the pilot test lasts. The security ones, I hire them only for that day. At the end of the test, the waiters return to the ERTE until we reopen.

– Should the personnel enter with negative PCR?

-Yes. The tests were paid by the Xunta. The waiters are eager to return. You also need to generate income.

–Can customers leave the premises whenever they want?

“And once outside, can they go back in?”

-Yes. They must be identified. They can go out, go where they want, and go back to the club.

“There is desire: the first 120 were finished in less than four hours and, the rest, which were taken days later, at 20 minutes”

-That the tickets sold out so fast reflects the desire that there is for nightclubs.

-Of course. The first 120 were finished in less than four hours and the rest, which were taken days later, after 20 minutes. The desire is incredible. People trust the sector and have a crazy desire to go out: they want to dance, listen to music … lead a normal life.

– How do they prepare the place?

–There will be gels in the hall, in the bathrooms and on the bars, but not on the tables. We have revised the air conditioning so that it is in perfect shape and the markings on the floor to indicate the entrance and exit zone: there is a door to enter and another to exit.

– Do you have any fear in the absence of a few hours for the pilot test?

-None. I have maximum confidence and security in the people and the forces of order, who will also be in charge of controlling the situation outside, they can even enter the premises. I think people will be responsible.

–If a client cannot go for whatever reason, can their place be replaced?

-Not. But, with all the desire that there is, I believe that nobody is going to fall off the list. If someone tests positive on PCR, they won’t be able to come, but hopefully that won’t happen.

– Are there nightlife venues in Vigo that have already closed permanently due to the COVID crisis?

-I have no record. Those in charge of the businesses are eager to reopen.