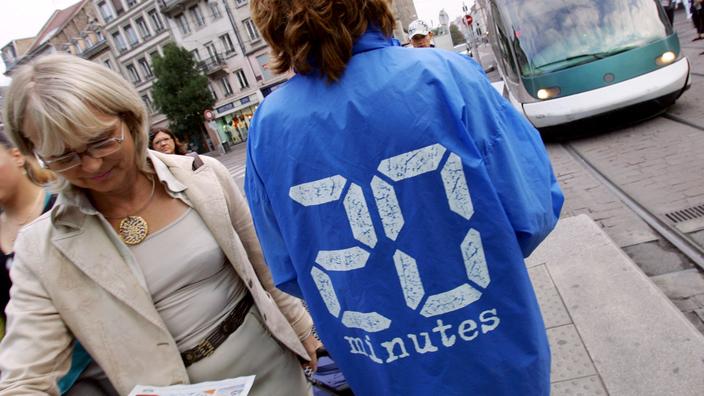 The free paper edition of the newspaper will now be distributed three days a week. After a 38% drop in turnover in 2020, the media is banking on digital to rebound in the coming months.

A new formula for 20 minutes from this Wednesday, June 9. The paper edition of the free newspaper will now be distributed three days a week: Monday, Wednesday and Friday, instead of four. After a 38% drop in turnover in 2020, the media is banking on digital to rebound in the coming months. The group subsidiary West France and Rossel is starting a redesign of its website and hopes to increase its digital revenues to 50% of its turnover in 2022, up from 37% in 2019.

Between the collapse of the advertising market, the suspension of its paper version during the first confinement, and the disaffection of public transport where it is widely distributed, the economic situation of 20 minutes, has been severely deteriorated by the health crisis. Nevertheless, the newspaper saw its digital audience increase with the health crisis, reaching on some days more than 15 million visits.

«All the ideas crossed us during the confinement: to abandon the paper or to go to the paying one. But we quickly concluded that it was important to keep the paper journal as long as possible, even though we are in a market that is slowly declining.», Explains Frédéric Daruty, Chairman and CEO of 20 minutes.

To bounce back from the health crisis, the media has implemented a new paper format, with “a complete editorial repositioning», Reveals the editor-in-chief, Armelle Le Goff. 20 minutes will now be published on Monday, Wednesday and Friday, with themes that will change depending on the day. The editorial staff, which has 91 journalists, a third of whom work in the regions, will offer more environmental and cultural subjects to its core target: 18-30 year olds.

The redesign of the website is planned for next year. To straighten out his accounts, 20 minutes hopes to increase its advertising revenue by leveraging video, audio and “brand content»(Production of content for brands). In addition, with the disappearance of cookies, targeting only becomes possible with the user’s email. In this regard, 20 minutes will offer its readers access to “personalized, more local content with different functionalitiesTo convince them to register on his site. To strengthen its data and attract advertisers, 20 minutes has also formed a strategic association with West France.

Finally, with the drop in public transport frequentation and the development of soft mobility, the newspaper will deploy new distribution points in the streets, local shops, universities and even coworking spaces. “In an age where there is a polarization of opinion, we want to produce inclusive information for readers. And this, in a peaceful context», Concludes Frédéric Daruty.