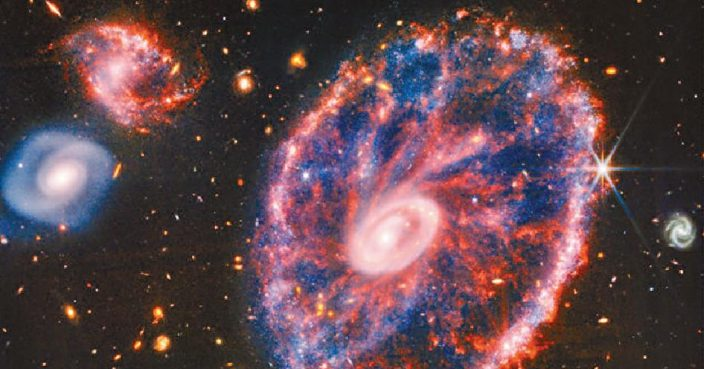 NASA and the European Space Agency (ESA) released another image from the Webb Space Telescope on Tuesday, capturing a new image of the Cartwheel Galaxy, with its colorful, spinning outer ring clearly visible , and the colors of the galaxies are unprecedentedly clear.

The Wheel Galaxy is located in the constellation Sculptor, about 500 million light-years from Earth, and it currently appears to have formed when two galaxies collided violently. NASA and ESA said in a statement that the collision of the galaxies caused the two rings to expand from the center, like the ripples caused by a stone thrown into a pond.

The smaller white ring remains near the center of the galaxy, the statement said, and the colorful outer ring has expanded into the universe for about 444 million years. When the outer ring expands and encounters gas, it detonates new stars.

NASA and ESA point out that the Webb Space Telescope’s ability to detect infrared light allows it to penetrate the “large amount of hot dust” that obscures the Wheel Galaxy, and that the telescope can also detect areas rich in chemicals such as hydrocarbons, as well as areas similar to Earth’s. Dust particles on the dust.

The wheel galaxy is still in a state of rapid change, and this new image also allows scientists to understand what happened in the past and how the wheel galaxy will evolve in the future.

People’s Bank of China Shanghai Headquarters: Guide financial institutions to increase loans to the real economy in the second half of the year

Put on a super good figure: the rumored ZARA leg pants are also available in Taiwan and Hong Kong!