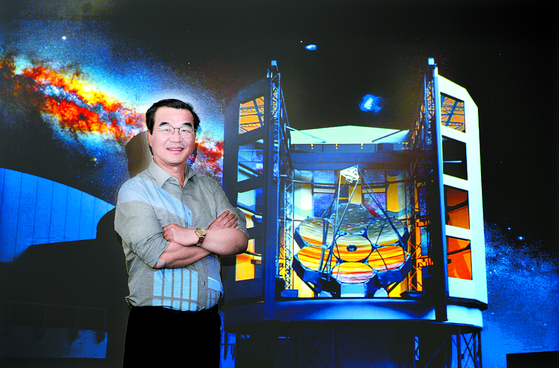 Park Byung-gon, Director of the Large Telescope Project of the Astronomical Research Institute, stood in front of the image of the Giant Magellanic Telescope to be installed in Las Campanas, the Chilean Andes Mountains. Visiting Reporter Kim Seong-tae

It is an age of chaos. The world is groaning due to the new coronavirus infection pandemic, but on the other hand, a space probe that flew to Mars outside of the Earth is flying from the site to helicopters. As much as the speed of science and technology development, the changes in society and environment surrounding humanity are so dizzy. The more confusing the present, the more curious about the future. Where is Korea and mankind headed? In fact, the answer is in the hands of mankind. The future is not about predicting, but about dreaming and creating. The special series,’Finding the End of Cutting Edge’, visits the scenes and characters of cutting-edge science and technology that open up the future in the midst of the current chaos.

Participated in Earth’s largest telescope project
25.4m diameter, 10 times the performance of the Hubble Telescope
You can even recognize coins outside 400 km.

Completion in 2030 after delayed GMT schedule
It is possible to capture clues to extraterrestrial planets and life forms.

70 degrees 41 minutes 09 seconds west longitude, 29 degrees 1 minute 42 seconds south latitude. One of the largest projects of mankind is underway in Las Campanas, 2500m above sea level, in the northern part of Chile in the Andes Mountains of South America, on the other side of the Earth on the Korean Peninsula. It is a Giant Magellan Telescope (GMT). With a caliber of more than 25m, this super-giant reflex telescope performs more than 10 times better than the Hubble Space Telescope floating in Earth’s orbit at an altitude of 540km. At least 13.5 billion light-years, it is an optical telescope that allows you to see the first stars in the universe after the Big Bang. The Korea Astronomical Research Institute (KASI) is also participating in the GMT project, which costs more than 1 trillion won. On the 23rd, I visited the Daejeon Astronomical Research Institute and met Park Byung-gon (57), head of the large telescope project, to hear about the cutting edge of observational astronomy.

Without a large telescope, I feel like I’m closing my eyes

What kind of telescope is the GMT?

“It is one of the next-generation super-giant reflex telescopes that mankind is challenging. It is a reflection telescope with a main diameter of 25.4m, collecting 7 concave mirrors with a diameter of 8.4m, a thickness of 40cm, and a weight of 20t. You can see not only visible light but also near-infrared light. It has 10 times better resolution than the 2.4m main diameter Hubble Space Telescope. Resolution is, in simple terms, the ability to see two separate lights as one when viewed from a distance, and see them in two. The practical limit of the concave mirror used in the reflex telescope is 8.4m. After making a mirror, you must load it in a vibration-free vehicle with a width of at least 10m and cross the road to the top of the mountain where the observatory is located. ”

What are you looking for?

“It’s the same thing as what the research topic is. The most distant universe seen through the Hubble Telescope is 10 billion light years old. To see a universe like this means to see the universe 10 billion years ago. The universe we estimate is 13.7 billion years old. About 200 million years have passed since the first star in the universe after the Big Bang. Then, you have to look at at least 13.5 billion light-years before you can see the first stars in the universe. If you have seen 10 billion light-years with the Hubble Space Telescope, the next-generation space telescope is for observing the’First Star’ in space farther than that. There is also a mission to find extraterrestrial planets and extraterrestrial life. The Kepler Space Telescope, which has a diameter of 1m, has discovered numerous extraterrestrial planets, and GMT can analyze whether or not life can live on the extraterrestrial planet. Visible ultra-precision spectroscopy and near-infrared high dispersion spectroscopy play a role. A spectroscope creates a spectrum by spreading light by wavelength, and if you look closely at a specific part, there is a part without light in the middle. It is a phenomenon that occurs when the elements of the object to be observed absorb light. All elements, such as hydrogen, oxygen, and carbon, have their own position to deplete, or absorb, energy. By looking at which position in the spectrum has turned black, you can even find the right element and molecule. In other words, you can see which planet has something like carbon, methane, or water, so you can find direct evidence that there are living things.”

Why do you see the stars What is good for mankind.

“It’s similar to why you do astronomy. The driving force that our humanity has developed so far is to reveal curiosity, that is, the unknown. The reason for studying the universe is to get to know it well because you don’t know what it looks like. It has been the driving force of numerous science and technology and human development. The image pickup device (CCD) of a digital camera, which acts as a film of a film camera, started from a space telescope. The magnetic resonance technology used in radio telescopes has since evolved into a magnetic resonance imaging system (MRI) in hospitals.” 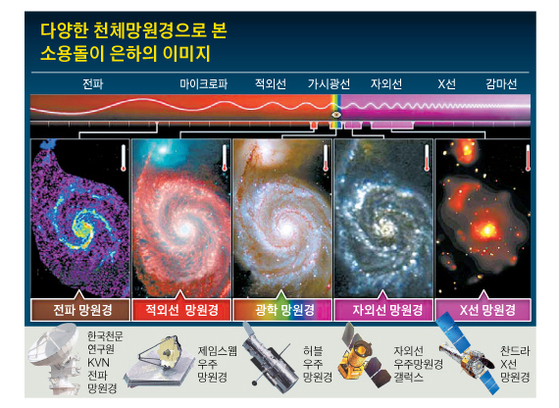 How does the GMT compare with the telescope of the largest Bohyeonsan Observatory in Korea?

“The reflex telescope of the Bohyeonsan Observatory, made in 1996, is proud of Korea enough to decorate the back of a 10,000 won bill, but its caliber is only 1.8m. GMT has more than 10 times the aperture, 14 times the resolution, and 200 times the condensing power (the power to collect light and make it look brighter). If the Bohyeonsan Observatory’s telescope is enough to identify a 100-won coin from nearby Yeongcheon-si, GMT can recognize a coin that fell on Mt. Geumgang 400km away.

Why don’t you make a bigger telescope after Bohyeonsan Mountain in Korea?

“Korea has a bad environment for astronomical observation. Even at Mount Bohyeon, the best place, there are no more than 150 sunny days a year. The image of the star is also not clear. The star should appear as a single point, but it appears blurry due to the atmospheric environment. The light pollution continues to grow. The city lights are getting brighter, but the lights on the East Sea squid fishing boat are very strong. Mauna Keana, Hawaii, Las Campana, Chile has a dry and stable atmosphere. The weather is clear for more than 300 days a year, so it’s like a desert with only 1mm of precipitation.”

How did you get involved in the GMT project?

“After the completion of the Bohyeonsan Observatory, even Japan had a 1.88m caliber astronomical telescope long ago, and in 1996, an 8m telescope was already being built. I realized that my country is far from world-class. In space observation, the lack of a proper telescope is like closing your eyes. With a 1.8m telescope, it is about the level of seeing stars in our galaxy. It is not competition itself. Securing a large telescope in Korea has been a long-awaited project for astronomers in Korea. However, domestic technology alone could not make such a telescope. So I looked for ways to participate in projects in other countries. That’s GMT.”

When will GMT be completed?

“The project started in 2004, and Korea participated in 2009. At the time, I thought it could be completed by 2019. However, large-scale projects with state-of-the-art technology face challenges along the way. It is estimated now that it cannot be completed until 2030. When you observe the universe from the ground, the air in the atmosphere distorts the starlight. The solution to this is adaptive optics, that is, a technology that cancels atmospheric disturbances. 700 pistons are attached behind the surface of a mirror, distorting the mirror surface to match the light wave surface of the light passing through the shaking air. It is assumed that the piston moves about 1000 times per second. It’s not an easy skill. When this is implemented, you can properly observe deep space like a space telescope. Space telescopes can achieve much sharper images in airless space, but their size is limited. Munyeon Cheon is participating in the construction with the goal of securing a 10% stake in the GMT project.”

“Some of the light (electromagnetic waves) from space are gamma rays, X-rays, and far-infrared rays. These are blocked by the Earth’s atmosphere and cannot reach the ground. In this case, you need a space telescope for each wavelength. Most people think of only visible light when it comes to starlight, but the visible light that we can see is only a small part of the entire electromagnetic wave band. There are many obstacles in the universe that are invisible to our eyes, but that we can bump into while walking. A typical one is a black hole. When a black hole sucks in the material around it, it releases a great deal of energy. That energy is X-rays. Observation with a Chandra X-ray space telescope reveals the existence of a black hole.”

If you look at the astrophotography, it is all natural. Are there any colors of the stars?

“The color of astronomical photos taken with optical telescopes such as the Hubble Space Telescope is real. However, when taking a picture, the three primary colors of light, red (R), green (G), and blue (B), are taken separately and then combined using multiple filters. R·G·B must be taken separately to accurately identify the target. However, it is natural, but the color of the astronomical telescope photographs of wavelengths outside of visible light such as X-rays or ultraviolet rays is fake. It is not a color that can be detected by the human eye anyway, so it is randomly colored to make it easier to compare. Of course, there are principles in it.”

What will observational astronomy look like in 50 or 100 years?

“Even the absurd imaginations that I think of now will be able to come true in 50 years. A telescope with a diameter of 100 meters can be built on the moon, which is only one-sixth of the Earth’s gravity. In fact, haven’t you made a black hole image by connecting radio telescopes from several places on the earth to create the effect of a radio telescope the size of the Earth? If you create a radio telescope with a diameter of 380,000 km by connecting the telescopes of the Earth and the moon, you will be able to take pictures of unimaginable objects and solve the secrets of the universe. This is possible if the’Artemis Plan’, a manned lunar exploration project led by the US, proceeds.” 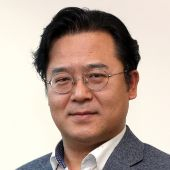 See Also:  《SEGA New Creation Ball ROAD to the WORLD》 New to break through the center for tactics