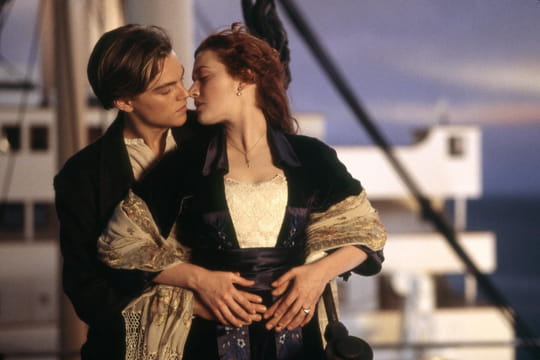 TITANIC FILM – While the romance between Rose and Jack is romanticized, the James Cameron film references several true stories that took place during the sinking of the Titanic.

[Mis à jour le 29 novembre 2020 à 20h30] Titanic has so marked popular culture that two questions often come to mind when (re) discovering the work of James Cameron: “was there room for two on this board”, and “the romance between Jack and Rose is it a true story “? If the subject of the board continues to raise debate 23 years after the film’s release, the answer to the second question has already been found: no, the romance between Leonardo Dicaprio and Kate Winslet is not adapted from a true story, both characters being fictional. But Titanic, which also traces the sinking of the famous liner in 1912, offers an extremely faithful reconstruction of the sinking. So much so that several historical elements are strewn throughout the feature film, to make it as close as possible to reality.

During the production of Titanic, two historians brought their knowledge to James Cameron: Don Lynch and Ken Marschall, authors of The Great Illustrated History of the Titanic, worked with the director so that the reconstruction of the shipwreck is as faithful as possible to the drama that took place at the beginning of the twentieth century. While Rose and Jack, and their families, are fictional, they hang out with people who actually existed, such as Captain Smith, Commander Smith, or architect Joseph Bruce Ismay. We can also see, during the scene of the sinking, a nod to a couple who really existed: it is Isidor and Ida Straus, two members of the first class of the boat, who have decided to leave their place on the rescue channels to die together on the boat. They are represented in the film in a very moving scene, during which an elderly couple, entwined in a bed, awaits death. If it is not known exactly how the captain of the boat died, several theories exist about him, one of the rumors states that he would have stayed behind to sink with the Titanic, as shown in the film.

Among the elements of the Titanic scenario that have not been proven historically is the fact that Bruce Ismay allegedly pressured the captain to make the ship go faster. Ismay has always defended himself against such accusations, and historians tend to side with the architect on this point. The architect was also exonerated of the accusations of fault which weighed on him after the sinking of the liner. The death of First Officer William Murdoch in the film was also controversial, as he is seen in the feature shoot two men before killing himself. If this scene is inspired by rumors of suicide, these have been denied by several observers and witnesses.

The love affair between Rose and Jack could hardly have seen the light of day due to the social conventions of the time. So it’s no surprise that Rose DeWitt Bukater and Jack Dawson are totally fictional characters, invented by James Cameron. However, for the role carried by Kate Winslet, the director would have been inspired by a manuscript of Helen Churchill Candee, American journalist who describes his romance with a passenger of the boat. While the names of the protagonists of Titanic had already been found, James Cameron discovered that a certain J. Dawson, a member of the Titanic’s engineering team, was indeed killed in the wreck. His name would be James, however, not Jack. He is buried in Halifax, Nova Scotia.

Titanic is the film that truly launched the careers of Leonardo DiCaprio and Kate Winslet, who play the two doomed lovers in James Cameron’s feature film. Find the main cast of Titanic below:

A huge success at the 11 Oscars, Titanic was the most expensive film ever produced when it was released with a budget of over $ 200 million. It has since been overtaken by Spider-Man 3 and Avatar but remains a cult film for an impressive number of fans and moviegoers. The shooting, very trying, lasted more than eight months. Titanic is also the film that launched the careers of its young actors. Leonardo DiCaprio suddenly experienced an immense frenzy on the part of fans who often declared themselves in love with him and was able, thanks to this film, to really launch his career, by becoming a much coveted actor. Following Titanic, Kate Winslet has also appeared in many award-winning films that have allowed her to become the famous actress she is today. On April 4, 2012, James Cameron decided to release the film in 3D version for the centenary of the sinking.

Synopsis – Southampton, April 10, 1912. The Titanic, the largest ocean liner in the world, is about to set sail for its first voyage to New York. On board, the modest Jack Dawson (Leonardo DiCaprio), a third-class passenger who won his poker ticket, meets Rose Dewitt Buckater (Kate Winslet), a beautiful first-class girl from the upper middle class and whom his mother Ruth (Frances Fisher) promised to Caledon Hockley (Billy Zane), a wealthy aristocrat. Jack will introduce Rose to the festive world of third class evenings, despite the disagreements of Caledon and Ruth, determined to prevent Rose from falling in love with Jack. But although everything opposes them, the two young people will fall madly in love with each other and promise to run away together when the liner arrives. Their projects will sink at the same time as the Titanic which then collides with an iceberg in the middle of an ocean with freezing water …