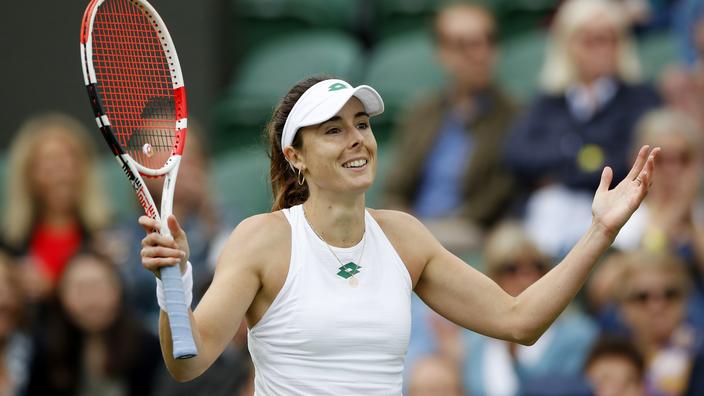 Everything is rolling for the two-time defending champion and world number one Novak Djokjovic. The Serbian qualified for the 3rd round of Wimbledon on Wednesday by quietly disposing of South African Kevin Anderson (102nd worldwide) 6-3, 6-3, 6-3, finalist of the 2018 edition, against… Djoko.

The very slippery Center Court is the subject of debate. Adrian Mannarino and Serena Williams were forced to retire on Tuesday. Less problem for Novak Djokovic. The Serb had nevertheless fallen twice during his first round against Jack Draper. The world number 1 once again fell against Kevin Anderson, without consequence, once again. He preferred to smile: “I have a very good connection with the public but also with the grass».

The ghost
As at the last Australian Open, Ugo Humbert surrendered in five sets against Nick Kyrgios. Arrested by the curfew Tuesday evening, at 3-3, this very beautiful duel of the first round saw the Australian, 60th in the world, win 9-7 in the last act this Wednesday against the alleged best French chance on turf (6-4, 4-6, 3-6, 6-1, 9-7).

« I was a huge underdog. Ugo Humbert a wonderful boy and he had a fantastic week in Halle. Yesterday (Tuesday) when it started to rain, I thought it was going to be postponed, so I spent the day stuffing myself! Maybe that’s why I started slow. I was in so much physical pain after last night, it’s been a long time since I played… But it is not difficult to get up when playing in front of such an audience. Now I’m going to go to the hotel, play Call of Duty with my girlfriend and come back. Nick Kyrgios, relaxed after his victory against Ugo Humbert.

Like Benoît Paire on Tuesday, eliminated by Diego Schwartzman, the 22-year-old Frenchman (83e world) a «balance »The third set this Wednesday against Aljaz Bedene by scoring only … two points and conceding 24 … After two first sets hung, the fiery Ile-de-France was overcome by frustration and cashed a wheel in the ultimate round (6-4, 6-4, 6-0).

The French Alizé Cornet managed a nice shot by outclassing the Canadian seeded 5 (6-2, 6-1) in 1 hour 23. Already dominated by the Niçoise, a few days ago in Berlin, Andreescu has gone completely to through (34 faults) facing a Cornet, good foot good eye during this first round. Just like this magnificent lob on the match ball. She will face Minnen or Tomljanovic in the second round. Alizé Cornet and Clara Burel who easily dominated the 235e world player, Ellen Perez 6-2, 6-2, in 1 hour of play, are the only two Blue to reach the stage of 2e tour.

The three-time tricolor waltz
Interrupted two nights in a row for lack of light, the first round between Christopher O’Connell (130th) and Gaël Monfils, which started on Monday, finally ended on Wednesday with a success for the latter 4-6, 6-2, 7–6 (5), 4–6, 6–4, in 3:23 hours of play. The French number one signs his third victory only in nearly a year and a half. He faces in the second round Pedro Martinez.

Seeded 9, Belinda Bencic is already taking the door. The Swiss, yet finalist on the grass in Berlin a few days ago, suffered the law of the Slovenian Kaja Juvan, 102nd player in the world (6-3, 6-3). It is also over for the American Sofia Kenin, seeded 4, swept by her compatriot Madison Brengle (6-2, 6-4).

The underdogs of the men’s table

Successful entries for the fit men on grass, Matteo Berrettini, winner of the Queen’s, ten days ago, and for Félix Auger-Aliassime, finalist in Stuttgart and semi-finalist in Halle. The Italian won in four sets against (6-4, 3-6, 6-4, 6-0) and the Canadian walked against Thiago Monteiro (6-3, 6-3, 6-3 ).

The outsiders of the female table

Belarusian Aryna Sabalenka (4th) gave up a set to British guest Katie Boulter (219th) before winning 4-6, 6-3, 6-3 and thus reaching the third round at Wimbledon for the first times of his career. The Ukrainian Elina Svitolina (5th), also gave up a set, but finally dominated the Belgian Alison Van Uytvanck to reach the second round.