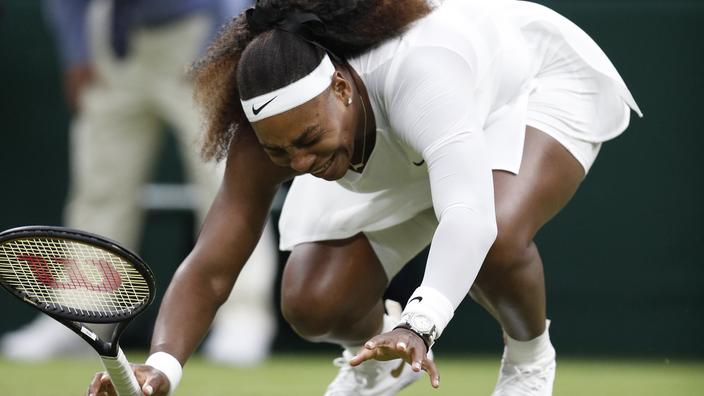 Umbrellas are still out in London. Between the drops, Venus Williams distinguished herself at 41 years old. Her sister Serena threw in the towel. Under the roof of Center Court Roger Federer got scared.

The rain further disrupted the smooth running of the tournament on Tuesday. After the 15 games canceled on Monday, 14 new games were postponed due to the rain. The majority of the matches of the afternoon were thus interrupted for more than three hours, except two which continued on the two courts equipped with a roof, the Center Court and the Court n ° 1. Several matches were still canceled on Wednesday. This is particularly the case of the meetings of Jo-Wilfried Tsonga (against Mikael Ymer), Clara Burel (against Ellen Perez) and Alizé Cornet against Bianca Andreescu. Faced with the very disturbed weather, the organizers announced that the first two rounds of the doubles matches will take place in the best of three sets and not of five sets, as tradition dictates …

Visibly injured in the right thigh, Serena Williams, 40 in September, threw in the towel at 3-3 in the first set against Belarusian Aliaksandra Sasnovich (100th world) and left the court in tears. At 3-2 for her, she limped off the court and came back with her right thigh wrapped in a huge bandage. In tears, the American played three more points on her faceoff before giving up. The player with 23 Grand Slam titles had so far only given up once in the middle of a match in a Grand Slam tournament, in the round of 16 against Arantxa Sanchez at Wimbledon in 1998.

Roger Federer was scared Tuesday against Adrian Mannarino. The two players were tied 6-4, 6-7 (3/7), 3-6, 6-2 when Mannarino, who had just lost the fourth set after injuring his right knee in the fore- last game, decided to throw in the towel. Before this twist of fate, the French had rather dominated the debates against a Federer, far from his best level.

Federer, fair play, admitted after his happy victory against Mannarino: “I hope he has nothing, it also shows that a ball can change the court of a season. He was the best so far, obviously. I was a little bit lucky, but that’s not really what matters, I hope he will come back soon ».

Roger Federer, who dominated Adrian Mannarino on Tuesday afternoon in the second rotation at Center Court, is playing his 22e Wimbledon. With 22 appearances in London, the Swiss erased his own record of 21 appearances at the Australian Open, but also that of Feliciano Lopez at Roland-Garros.

In 2021, Benoît Paire, it is two victories for eighteen defeats and a permanent malaise. If his attitude on the court is often indefensible, his rants sometimes ring true: “It’s inconsistent. We are being put in bubbles while everyone (in London) is outside in bars drinking shots, no one is wearing a mask outside, there are spectators talking to me. centimeter and they don’t have a mask … They can give me the covid, but we are in a special bubble! These rules, I don’t understand them“. And the London public, for its part, did not understand his lamentable attitude on the court (defeat against Diego Schwartzman in three dry sets).

Gaël Monfils, in the midst of a crisis of confidence and results in recent months, still has fine remains. Evidenced by this sublime sequence of serve – volley – tweener against Christopher O’Connell during his first round.

Defeated with honors by world number one Ashleigh Barty (6-1, 6-7, 6-1), Carla Suarez Navarro said goodbye to Wimbledon with panache. For his last in London, the 32-year-old Spaniard, cured of cancer, was entitled to a very nice ovation from the Center Court audience. A moving moment.

Alexander Zverev remained on a first round defeat at Church Road in 2019. No false start this time and a very easy success against Dutchman Tallon Griekspoor (124e) 6–3, 6–4, 6–1 in 1h34 of play. With 34 winning strokes for 18 unforced errors, the world number 6 who will face either Tennys Sandgren or Norbert Gombos in 2e tour, confirms that he is one of the underdogs to watch very closely.

The lost marathons of the blues

The little patch of blue sky

Antoine Hoang recovered from a handicap of two sets to one, after an interruption due to the rain, to dominate the Chinese Zhizhen Zhang (4-6, 7-6 [5], 6-7 [5], 6-3, 6-2), and advance to the second round. The 156th ATP, resulting from the qualifications, offers a third qualification for a second round in the Grand Slam after his third round at Roland Garros in 2019 and his second round at the US Open 2019. It also goes for Richard Gasquet, winner of Japanese Sugita in 4 sets (7–6, 4–6, 6–2, 6–1), After Rafael Nadal at Roland Garros, the Biterrois will face Roger Federer in 2e tower. The Swiss, who took advantage of Mannarino’s retirement, may tremble if he does not raise his level of play. Lucas Pouille – Cameron Norrie was arrested overnight. The Northerner leads a set zero 7-6 (6). Monfils still fights against O’Connel: 4–6, 6–2, 7–6 (5), 4–6, 3–2 …