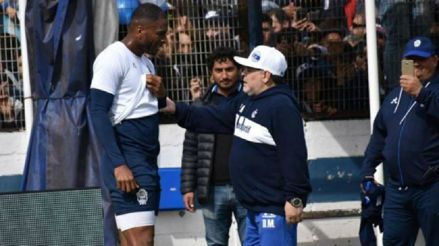 In conversation with RPPThe Colombian, who this Saturday will fight to remain in the First Division, told what it was like to have -for many- the best player of all time as a coach.

How did the news of having Diego Maradona as DT fall?

With the group, we didn’t think he was going to go (to Gymnastics). Does someone of that magnitude make it to the club? At first, we couldn’t believe it. As the days went by, and the news got louder, we said ‘oops, I’m serious’. On the day of the performance, we were waiting in the dressing room. He arrives and everyone is quiet. We didn’t know what to say to him. Everyone with fear … Diego was Diego. He broke the ice, he made a joke. With that, everyone greeted him, applauded him. He left you speechless, you didn’t know what to say to him.

What joke did he play on them?

Something like ‘what are they doing there quietly? Are they seeing a ghost or what? Something like that. He spoke one by one. That surprised me: the humility he had. He showed it every day. You don’t see him very often, especially in legends like him. He gave us kisses because there they greet with a kiss on the cheek. People couldn’t believe it. (We were thinking) is Diego really here?

Did they ever assimilate it?

I believe that one never ends up believing it. As the days go by (you think) ‘here it is’, but you always keep looking at it as (thinking) ‘incredible that it’s here’. If I, who am Colombian, felt, I imagine (what they felt) my Argentine colleagues … it must be a very strong feeling for them because, if it is not the greatest, it must be among the top two or three. Sharing training sessions, changing rooms, is unique. We are very privileged who had the opportunity.

How much did having him as a coach change things?

The club totally turned around what it was. (Outside of training) He was kept full every day. When they let the press in, it was very full. At the exit, everything was (signing) a shirt, (taking) a photo … it was something else. In principle, when he was not there, it was a normal club. Once Diego arrived, everything changed.

Was being in the eyes of the world a pressure?

On the contrary, it was a motivation. Having him was a privilege. He doesn’t need to tell you anything, just by having him you have to be motivated.

He didn’t need to say anything, but was he constantly communicating with you?

Diego always spoke. For example, they would finish training and he would start talking to one. We were adding, two, three … suddenly we were 15, 20 (players) listening to the things he told us, stories of the national team, of life. He had many stories and always told a different one. He approached you in a personal way and gave you advice.

Did he talk about the goal with his hand?

Yes, he told it as an anecdote, he told us that, thank God, at that time there was no VAR.

You mention that he gave them advice. What did he advise you?

He always had something to tell you in training. To me, who am central, he told me “nobody can happen to you, you are an animal, a beast”. I would say things to encourage you. You listened to them and you became a savage, haha.

Did you ever participate in training?

He couldn’t kick a lot, but in terms of definition he would stop to have the ball touched and passed.

What to say about the questions during his time as a Gymnastics coach?

I could not question Diego, what was he going to say. You can’t tell him anything, we had to take advantage of him, understand him, tuck him in, he was someone who liked to be close to the player. He felt, somehow, a gamer. He liked to enter the locker room, enter, chat … there was nothing to question him, at least from my person never any of that.

How was your exit from Gymnastics?

He told me to be patient, that I was going to add minutes, but it was my career. I thanked him a lot for what he said to me, for his words of encouragement, but I needed to play. It needed continuity. The decision not to continue at the club was a personal matter.

Much is said about his detachment in other clubs. Did he show it to you?

He always asked how we were doing, if they had already paid us. He kept an eye on what one needed as a player.