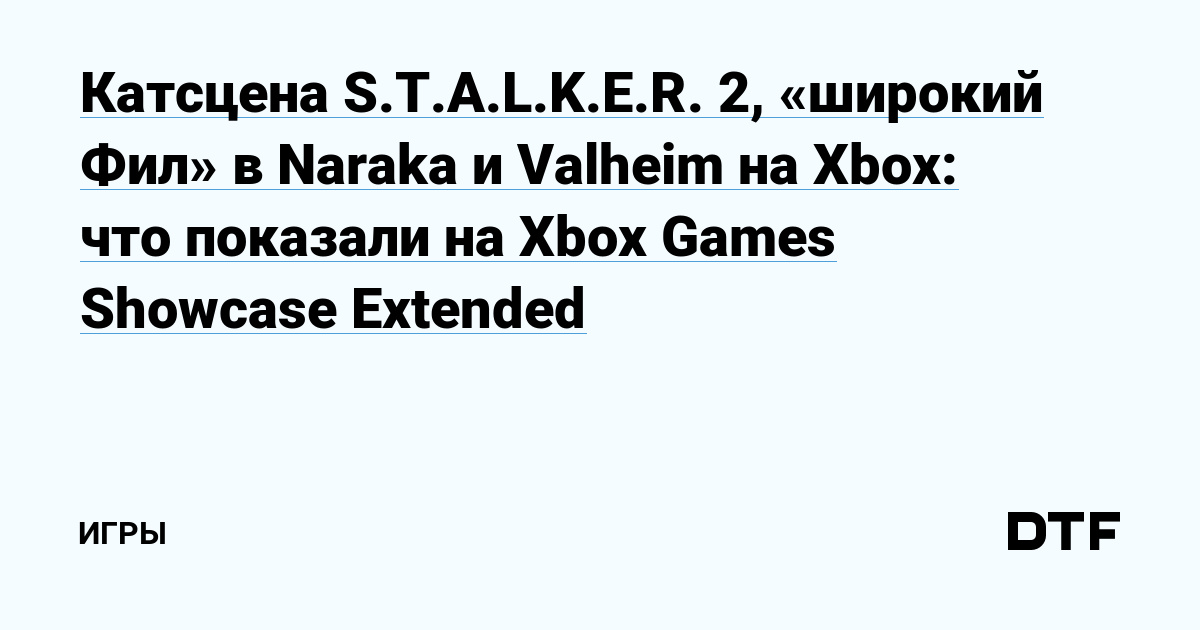 As well as the first Texas Chainsaw Massacre gameplay, a couple of Starfield details from Pete Hines, and shooter details from one of the Rick and Morty writers.

June 14 was the presentation of the Xbox Games Showcase Extended. As part of the event, the organizers showed game trailers, talked to the developers and shared details about the titles presented at the main event on June 12th. Collected in one material everything that was shown at the presentation.

The vice president of PR and marketing at Bethesda Softworks said that in Starfield, players will be able to decide for themselves how to play the game. They will also be able to complete quests in various ways and do whatever they want, depending on their gameplay style. According to Pete Hines, Starfield will be no different from other Bethesda games in this regard.

The developers have paid great attention to the customization of ships. However, players will have to carefully choose how to create them, as resources will be expensive and some difficult to obtain. In addition, some character skills will open up additional options for customizing ships.

The developers of Naraka demonstrated the capabilities of the character editor using the example of Phil Spencer.

The authors of Naraka reminded that the game will receive a full-fledged campaign and will be released on Xbox on June 23, 2022. There is also an Xbox One version in development. The game will be available on Game Pass from the day of release.

Developers from Obsidian Entertainment said that in the release version of Grounded, players will find many surprises, as well as unusual bosses in addition to the Mantis already shown. They thanked the fans and admitted that the community helped a lot with the creation of the game. Grounded will release in September 2022.

The authors of the turn-based strategy said that their main goal was to create a game in which you can really rewrite history. The developers hope that the game will attract not only fans of strategies, but also beginners. According to them, they tried to take the genre as a whole “to the next level”.

Oxide Games studio paid a lot of attention to ensuring that the decisions of the players, including visually reflected in the game.

Squanch Games studio staff and Justin Roiland, one of the authors of Rick and Morty, shared details about the creation of the shooter.

The developers call High on Life – “III-game”. Its passage will vary greatly depending on the chosen talking weapon, for which the protagonist uses living creatures – gantlings. With their help, the hero must destroy the alien cartel and save the Earth.

The game will have a lot of black humor, traditional for Rick and Morty. The release will take place in October 2022 on PC and Xbox. The game will be available on Game Pass from the day of release.

The asymmetrical co-op horror game is coming to PC and Xbox in 2023.

As part of the event, the authors of the simulator presented the United States World Update, which improves facilities in US cities.

The developers also showed and immediately released a small update that adds the American light passenger aircraft Beechcraft Model 18 to the game.

The authors of the medieval adventure shared a few details about the game, which they previously told in an interview with IGN.

Studio Monomi Park showed a 2.5-minute gameplay video of the sequel to Slime Rancher, which will be released in the fall of 2022.

The authors of the visual novel, designed for passing both alone and in the company of up to eight people, shared details about the creation of the game.

The add-on will add 10 cars in the spirit of the toy line, including the Hot Wheels Deora II and the Hennessey Venom F5. With the launch of the DLC, the game will have several tracks in different biomes, as well as an editor with over 80 different elements to create your own maps. Players will be able to share them with each other. The expansion will be released on July 19, 2022.

A leak confirmed The Fall Guys/Halo crossover launches June 30th and runs until July 4th. Players will be able to unlock the skins of the Master Chief, the bully, and the grunt.

In the action-strategy hybrid from Mojang Studios, players will have to explore a “familiar but dangerous world”, gather resources and team up with other players to fight off the Piglin invasion. The idea of ​​the game came to the authors of Minecraft back in 2018.

Minecraft Legends was developed under the code name Badger. At Minecon 2018, one of the creators of the game even showed up wearing a T-shirt with a reference to it as an “easter egg” for fans.

The video collected games from independent developers that were shown as part of Microsoft presentations in 2022.

In the video, the hero enters the Zone and witnesses a powerful ejection. At this time, the radio announcer says that a similar incident recently occurred in the same region.

Video from the authors of STALKER 2

In the GSC Game World studio, they showed a video about how their workdays have changed after the start of the “special military operation” of the Russian Federation on the territory of Ukraine.

Gas: Germany releases billions of euros to save the former subsidiary of Gazprom – All the Senegalese news in real time | All the news in Senegal today: sport, Senegalese politics, people and miscellaneous facts in Senegal

Hassan Youssef: The statement of kisses is “distorted”, and if I were with the same awareness, I would not have presented these scenes