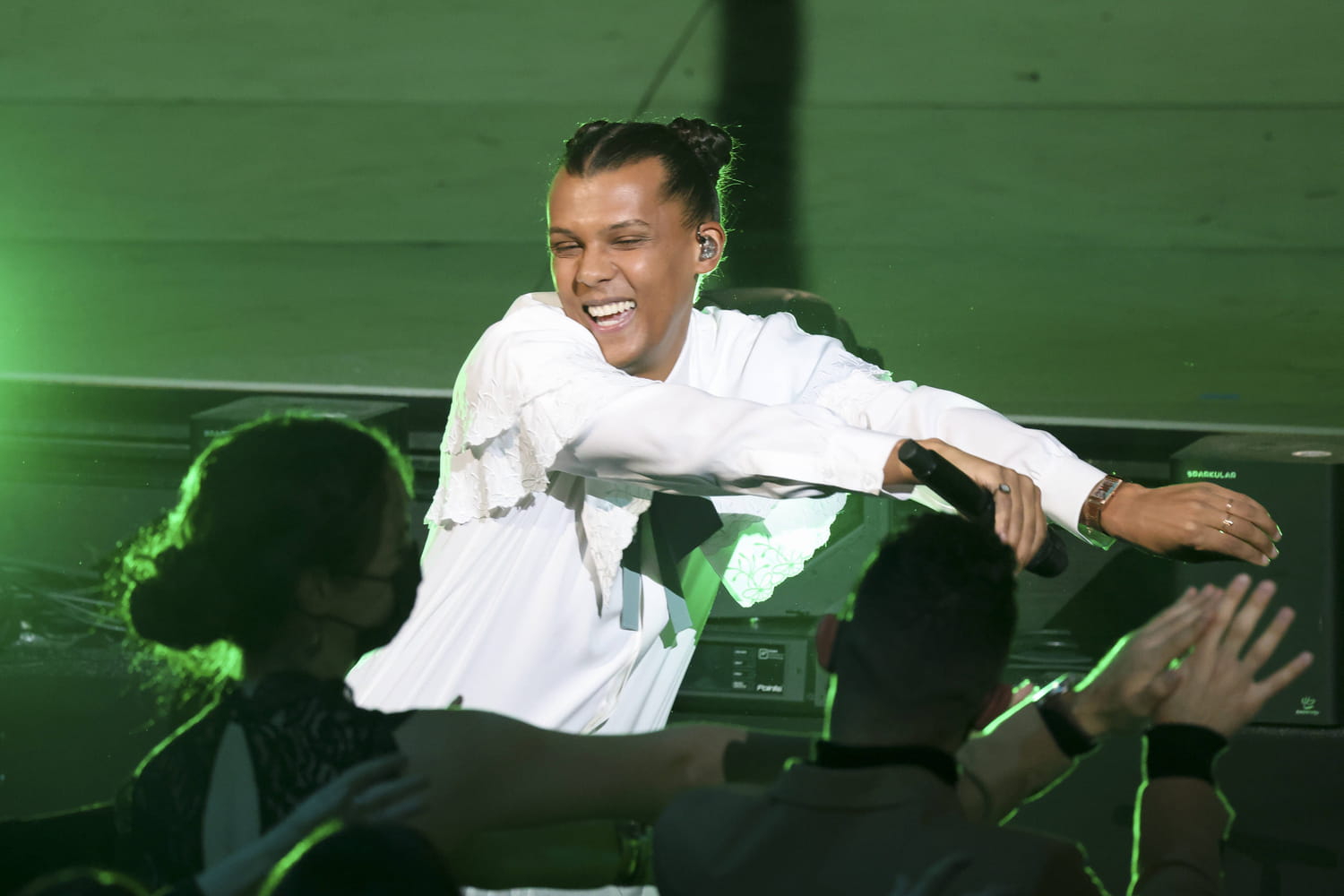 STROMAE. The Belgian singer Stromae will publish “Multitude”, his new album carried by the singles “Santé” and “L’enfer”, in March.

[Mis à jour le 23 février 2022 à 12h41] Only a few more days to wait. After seven years of absence, Stromae will release their new album, Multitude, next Friday, March 4. A third disc carried by two first singles, Health and hell, released in October and January respectively. As for the rest of the album, the mystery remains. If the visual identity of the Stromae version 2022 is known thanks to its few live performances, we know few Multitude.

Regarding the title of his album, Stromae explained its meaning to Anne-Claire Coudray in the TF1 newscast: “I think we are all multiple, we have lots of different characters and personalities, we are not summarized to a yoke or a box.” Inspired by his life, his travels and his diversity, the interpreter of Papaoutai promises “different grooves”. “I love to mix things up. The idea was really to take inspiration everywhere without pointing the finger at a country”, he explained to the 20 hours.

Tuesday, February 22, the Belgian artist gave his very first concert since his last album at Palais 12, in Brussels, his hometown. What give a new insight into what Multitude will be, of which he interpreted a total of seven titles. Health and hell of course, but also five other titles present on the album: Unbeaten, sons of joy, When we are, Bad day / Good day and My love. For the rest of Multitudeyou will have to wait until March 4th…

Stromae on stage, on French television. After long years of absence, the Belgian singer made his return to French television on Friday February 11, as honorary president of the 37th Victoires de la Musique ceremony. On this occasion, he performed on the Seine Musicale stage in Boulogne-Billancourt and performed the single Health.

The singer opened the evening with a superb performance, first animated as a tutorial to learn the choreography of Health, a single from his next album, which he then performed on the Victoires stage surrounded by his musicians. This avatar will also be part of his next concerts. The Belgian then appeared to present the Artist of the Year trophy to Orelsan.

Stromae offers a new memorable sequence on French television. Guest of the TF1 news on Sunday January 09, 2022, the Belgian singer, after a report on his career and his long break, performed on the set of Anne-Claire Coudray an unpublished piece, baptized hell. It was by answering a question from the journalist about the loneliness, the discomfort he may have felt during these seven years of silence, that Stromae began to sing in front of the camera.

Le single hell, which evokes suicide, was also put online on all streaming listening platforms, after the passage of Stromae on TF1. This surprising interview quickly, like the song, made the rounds of social networks, where thousands of anonymous people or personalities salute the performance and genius of a long-awaited Stromae.

No offense to his detractors and various polemicists, the singer caught the attention of Tedros Adhanom Ghebreyesus, the director general of the World Health Organization (WHO). “Thank you Stromae for highlighting the difficult subject of suicide in your latest album”, he wrote in a message on Twitter in which he relayed the video of the artist on the set of Anne-Claire Coudray, Sunday evening. “So important to ask for help if you are having difficulty and to support those who need help,” adds the boss of the WHO.

Stromae’s performance on the set of the 20 Hours of France 2 is obviously reminiscent of another cult moment in his career on television: in 2013, the singer split on the set of the Grand Journal de Canal+ to perform his song All The same. Another sequence that took viewers by surprise and made a date in the history of French television.

Two days after his masterstroke on the TF1 JT set, Stromae unveils the clip of hellhis second single from the album Multitude, expected in the spring. A minimalist video, in which we discover the Belgian singer, alone, sporting a long ponytail, a new look associated with his third album.

Struggling alone in the face of his demons, Stromae brings to life the lyrics of this song, which evokes suicidal thoughts and the fight against “guilt”. “I sometimes had suicidal thoughts. And I’m not proud of it. Sometimes we think it’s the only way to silence them. These thoughts that make us live in hell”, sings the interpreter of All The same. A rare highlight of a social subject too rarely mentioned publicly.

It is therefore the second single unveiled by Stromae: the song hell, which succeeds Santé, the first single from his forthcoming album. As we can see in the video above, it was on the set of TF1’s 20 Hours, Sunday January 09, 2022, that the singer performed this title for the first time, immediately posted on the platforms of streaming listening.

“I’m very happy to make this announcement, it’s been a long time, see you very soon.” Last week, Stromae confirmed their return by lifting the veil on the name and release date of their long-awaited new album: Multitude expected in stores on March 4, 2022.

In a funny video, it is a “multitude” of Stromae who announced the release date, the name of the album and returns to the few tour dates announced in recent weeks. New concert dates have also just been announced, including a show at the Accor Arena in Paris on February 24, 2022, or two concerts at Paris La Défense Arena on June 16 and 17, 2023. Find all the dates of its tour this way.

On the occasion of all these announcements, the singer Stromae had performed live for the first time since his last album, on the set of The Tonight Show, Jimmy Fallon’s American late show, surrounded by his musicians and dancers. The Belgian was able to interpret Healthfirst single from the album Multitude. A first live performance that already gave an idea of ​​Stromae’s new visual identity…

“How about we celebrate those who don’t celebrate.” For Stromae, good news never comes alone. After having created the surprise on Friday October 15, 2021 by picking up his audience when he woke up, at six in the morning with Healthhis new song, the interpreter of Papaoutai unveiled in stride, at the end of the day, the clip that accompanies this single. Proof of the expectation around the Belgian’s new project: the video has been viewed nearly five million times in one weekend.

In the video, Stromae features the people mentioned in the lyrics of his song, Rosa, Albert, Céline or Arlette, “Airplane pilot or nurse, truck driver or air hostess, Baker or fisherman” , “those who do not celebrate”, to whom he wants to “raise [s]we drink”. Everyone starts dancing, following the instructions of the Maestro. Discover the Health clip below:

“Twitter Health!” : on social networks, to announce the surprise release of his first single, this is the formula used by Stromae. “How about we celebrate those who don’t celebrate? For once, I’d like to raise my glass to those who don’t! To those who don’t…”, sings the author, composer and Belgian performer in this piece, in which he evokes different trades, these “everyday heroes” tested by the Covid-19 pandemic: “Airplane pilot or nurse, truck driver or air hostess, Baker or fisherman.”

But does the title of this new song have another meaning? On the Internet, the term Health is very often used in association with that of Stromae, who retired from the scene in 2015 after health problems. Victim of serious side effects from a preventive anti-malaria treatment, he had to withdraw from public life. “I could not stand the treatment, it gave me hallucinations. I thought I had gone mad, I was diagnosed with psychic decompensation”, he confided in this regard to Liberation in 2017.

Le single Health is good news for admirers of the Belgian artist, who had more or less formalized the release of an album this fall, before confirming his return with its programming at the festival Rock en Seine, in August 2022 at the Domaine national de Saint-Cloud, near Paris. A first concert date, the very first announced in France, almost nine years after his last album. “An event, the word is weak”, welcome the organizers of Rock en Seine. In addition, Stromae has announced the first dates of its tour, which will pass, in addition to Rock en Seine, by Les Eurockéennes on June 30, Garorock on July 7, Les Vieilles Charrues on July 14, at the Poupet Festival on July 15 and at the Cabaret Green on August 17, 2022.

On its Twitter account, Paris La Défense Arena announces the arrival of Stromae for two exceptional concerts, on June 16 and 17, 2023. The ticket office opens in presales on December 15. Here are all the dates announced for Stromae’s new tour, on the occasion of the release of Multitude :

PSG: Marco Verratti will appear on March 2 before the LFP Disciplinary Committee