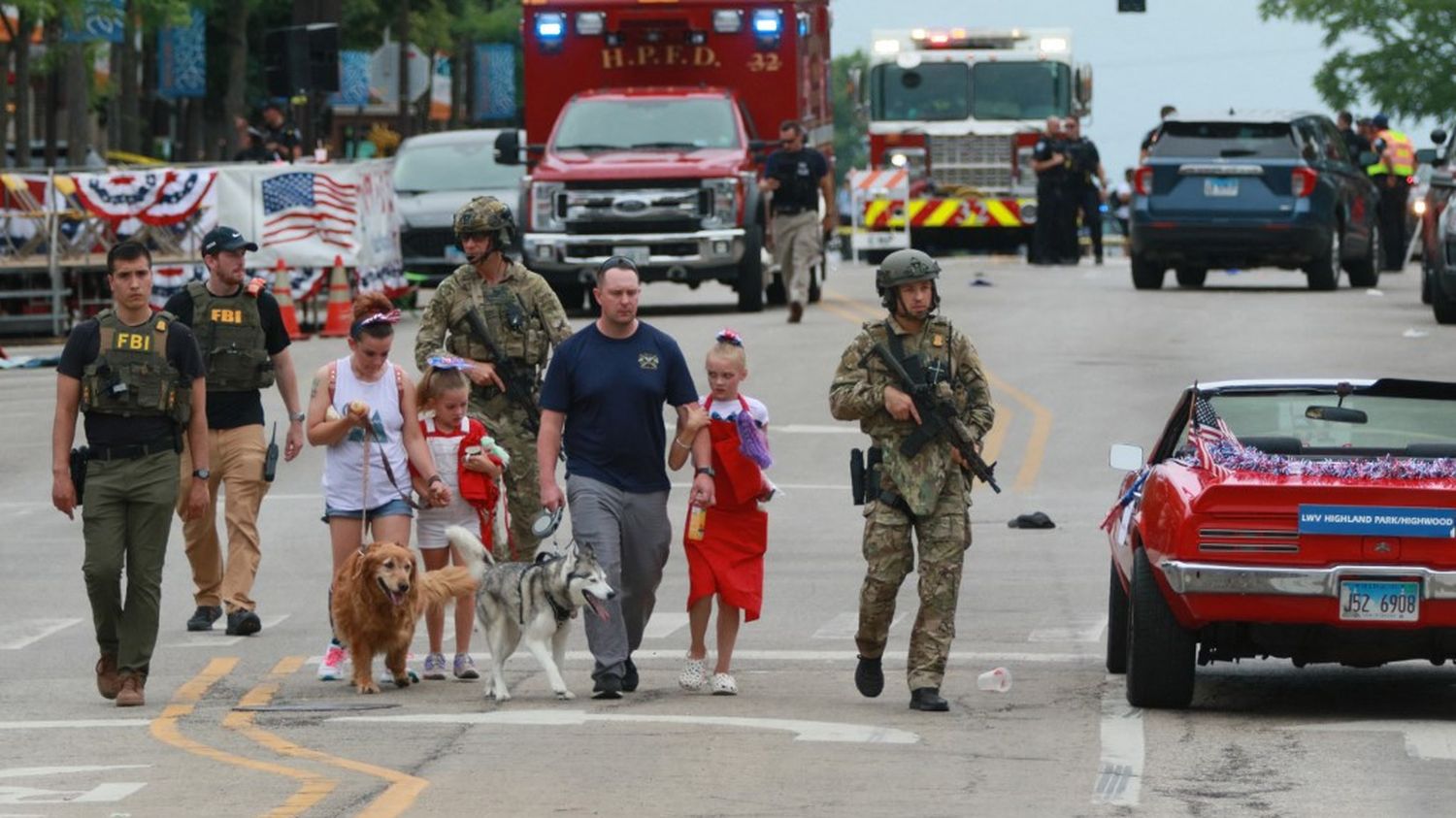 What was supposed to be a fun day turned into a nightmare. A shooting left at least six dead and 26 injured in the American town of Highland Park, near Chicago, during an Independence Day parade, the American national holiday, Monday July 4. A 22-year-old suspect was arrested and taken into custody. Here is what we know after this attack.

Hundreds of people were out in the streets of Highland Park. The town of 30,000 people, about 40 kilometers north of Chicago, Illinois, celebrated the 4th of July like the whole country. High school brass bands marched through the streets towards a square under the gaze of many families with children.

Law enforcement was notified of the first shots around 10:14 a.m., according to local police commander Chris O’Neill. New York Times (in English). According to a witness who came with his family interviewed by the newspaper, the shooter targeted the spectators who were waiting for the parade. “We heard about 50 gunshots, we all thought it was fireworks”commented on CNN a woman who witnessed the drama, which describes “people falling one after another”.

According to the first elements of the investigation, the shooter was positioned on the roof of a business accessible by an emergency staircase. “He was very discreet and difficult to see”described Christopher Covelli, a police spokesman. A rifle “powerful” was found by police where the shooter was, who fled shortly after law enforcement arrived at the scene.

At least 6 dead and 36 injured

The shooting left six people dead, according to the most recent report. Five people died at the scene and another after being taken to hospital. At least 36 people were also injured: 26 people aged 8 to 85 were taken to Highland Park Hospital and at least ten to nearby establishments, according to a hospital official quoted by the New York Times.

The authorities have deployed an important security device with hundreds of police officers, armored vehicles and federal reinforcements. Highland Park has set up counseling at a local school, and several nearby towns have canceled planned celebrations for the day.

The suspect identified by the police is a 22-year-old man. “from the region”, whose name and photo she released. Spotted in his car north of Chicago, he briefly tried to flee before being arrested “sans incident” and taken into custody, the Highland Park Police Chief said Monday evening. “The charges have not yet been approved at this time – and we are far from it”said Christopher Covelli quoted by CNN Monday evening.

The man had posted several videos on the internet in which he referred to weapons and shootings, according to the Chicago Tribune. Online, where he presents himself as a musician from Chicago under the pseudonym “Awake the Rapper”, he had posted a video several months earlier showing people shot dead, with an audio commentary: “I just need to do it (…) it is my destiny. Everything led me to this. Nothing can stop me, not even myself.” A clip, described by CNN, shows him in a classroom-like studio with headphones and a bulletproof vest. His accounts on YouTube and other social networks were not available on Monday evening.

The motives for the shooting are not yet clear. Before arresting the suspect, Christopher Covelli claimed the targets were “random” but the attack “intentional”.

A “bloody day” that feeds the debate on firearms

“On the day we came together to celebrate our community and freedom, we instead mourn the tragic loss of life”said Highland Park Mayor Nancy Rotering, who called the shooting a “bloodiest day” that the city has known. “There are no words for this kind of monster”said Democratic Illinois Governor JB Pritzker, who also called for tougher gun laws: “I’m furious that more lives are still being taken away by gun violence…As the 4th of July is celebrated once a year, mass shootings have become a daily American tradition.”added the official.

President Joe Biden, “shocked”for his part promised that he “wouldn’t give up not tackling the epidemic of gun violence” after this new bloodbath. “There is still a lot of work to do”noted the Democratic leader after the recent adoption of a law which tightens the criteria for obtaining firearms.

The United States is still reeling from a series of shootings, including one at an elementary school in Uvalde, Texas, in May that left 21 people dead, including 19 children. More generally, the country is facing an increase in gun violence, with more than 22,000 people killed since the start of the year according to the site. Gun Violence Archive. Another shootout also took lieu the same day in a Chicago neighborhood, injuring five people.

Rotterdam NL: Historic bridge remains – how does Jeff Bezos’ super yacht get out of the shipyard?