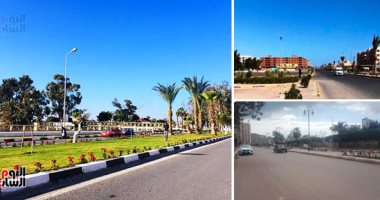 The most common question at this time is,When do we wear summer clothes??” Which was answered by the Meteorological Authority, where Manar Ghanem, a member of the authority’s media center, revealed that the easing of clothes is during daylight hours and is gradual, but caution must be taken because the weather is cold at night.

And a member of the media center of the authority indicated, in exclusive statements to “The Seventh Day”, that there is a difference between the maximum and the minimum of 15 degrees, warning against exaggeration in reducing clothes, saying: Usually, wearing summer clothes begins after smelling the breeze, which comes on April 25 this year. He pointed out that the spring season is known for sharp and rapid changes, so it is necessary to follow the weather forecast daily.

Today, Saturday, there is a noticeable rise in temperatures throughout, so that very hot weather prevails during the day in Greater Cairo, Lower Egypt and the south of the country, the temperature tilts on the western coasts, hot on the eastern coasts and southern Sinai, cold at night on Greater Cairo, Lower Egypt and the coasts. Northern and northern Upper Egypt, moderate over southern Sinai and southern Upper Egypt.

And the Meteorological Authority stated that today, dust is stuck in the air on Greater Cairo, Lower Egypt, the northern coasts and the cities of the Canal, and wind activity sometimes in the northwest coasts and the south of the country.

As for the temperatures, today, Saturday: Greater Cairo 36 degrees, the lowest 16 degrees, and Great Alexandria 27 a

Why did the Ukrainian president ask for the Australian “Bushmaster” armored vehicles?