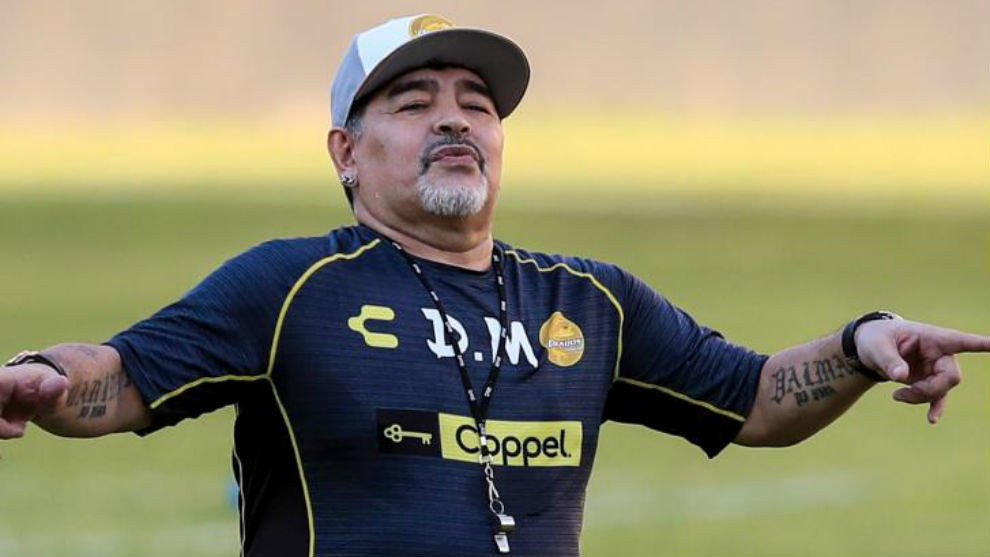 Diego Armando Maradona arrived in Mexico in September 2018. His arrival was somewhat unexpected, as every time he went to the country it was for sporadic visits to see his friends and maybe do some note in the country where he touched glory.

Now he came to the Aztec second division as coach of Dorados de Sinaloa, a team known for having had Pep Guardiola in its ranks in his last period as a player, and said by him his start as a coach.

Now Dorados are looking for the title and a chance to return to the top flight and it would be a good idea to bet on them at Bookmaker-Ratings where you can find the best betting sites with the best odds and the best insurance.

The arrival of Maradona was like a breath of fresh air for a city with many social problems. The arrival of El Diez was first seen as a publicity coup; sportingly, it was not thought that he would do anything. The team was near the bottom of the table, and Maradona’s record as a coach did not really inspire confidence.

Almost like his arrival at Napoli when the team was at the bottom and Diego came to their rescue.

But Pelusa came to work, immediately stamped his style on the team, and the dressing room, fascinated by the presence of the best player in history, began to win. Obviously, this surprised everyone, but even the national and international press thought that perhaps the effect would be short-lived because the squad was so limited.

He had no big names and the players were nowhere near the best in the Aztec lower division; the quality of the team left a lot to be desired. Maradona worked hard and stayed away from any possible scandal, and against all odds in his first tournament he got the team into the play-offs. Sinaloa was a party.

Pessimism continued to surround the team; no one gave anything for them, but in the mostly baseball-loving state, an idol had been born. The Dorados eliminated the tournament leaders to reach the final, surprising everyone. Diego did it again.

As in ’86, with an Argentinean team that nobody trusted, Maradona, now on the bench, took his Dorados to the final, where they fought until the end, but did not win the coveted title.

Second tournament and he does it again

For his second season in charge of the team, the press believed more in Dorados. But doubted that the success of the previous campaign would be replicated, as the squad was still very limited; only Maradona believed in his boys.

The so-called Big Fish signed a better campaign than the previous one and again qualified for the finals of the tournament. The players, the coach, and the city were in for a fantastic love affair. Sinaloa has not historically been a football city, in fact, the team is barely 18 years old.

But with Diego at the helm, they were on a par with the Venados and the city’s greatest idol, Julio César Chávez, perhaps the greatest Mexican boxer in history. Dorados stole everyone’s heart with a couple of spectacular campaigns that no one will ever forget.

Against everyone and everything, the team reached the final again, but, although Maradona is considered a god, he could not consummate the miracle and his Dorados fell again. The title was denied to a city hungry for triumph.

All good things come to an end

Diego still had two more years on his contract; he was delighted with the city, the people loved him, and the team was working. The board was willing to give him players so he could get that promotion to the first division.

But what they didn’t count on was how unpredictable Maradona was. In July 2019, the 86 World Cup winner announced his departure from the team and broke everyone’s heart.

Medical problems caused the ten to walk away from his Dorados.

Maradona went to Argentina, where he didn’t have the same success with Gimnasia y Esgrima and Dorados; without his boss, they fell dramatically in the league. Both were made for each other.

In Sinaloa, they still tell stories of how Diego smiled every time he went out and how he lived his everyday life talking to people and making them feel part of him. Diego had never been happier than in Sinaloa.

He was enjoying football again, leaving all the scandals behind him and putting a young team on the map with a desire to succeed. Maradona bathed in glory for a short period of time in a city that suffers from an ongoing war on drugs in Mexico.

Perhaps that is why Maradona and Sinaloa fell in love with each other. Both are tough, but with a lot of heart, and with a lot of pain, but with a desire to change. Maradona’s brief history in Mexico was wonderful, not as glorious as in ’86, but perhaps more exciting.

Diego will never be forgotten in Sinaloa.