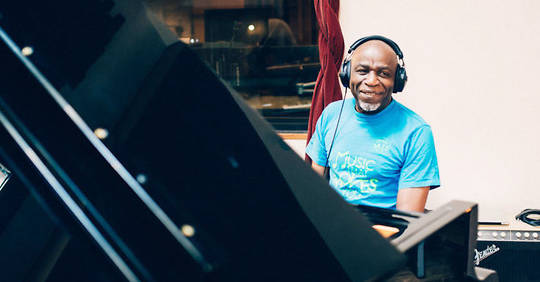 As a child, he played the ngembo, the “bat”, climbing trees to attend concerts. Decades later, Ray Lema pays tribute to one of the fathers of modern Congolese music, legend of rumba: François Luambo Makiadi, dit Franco, founder of the orchestra of the Almighty OK Jazz and disappeared in 1989. With his live album We enter KO, we leave OK, Recorded at the Kinshasa JazzKif festival in 2019, the Congolese pianist and singer revisits pieces of the “Guitar Wizard”, from his beginnings to his famous hit “Mario” released in 1986, at the end of his career.

Without distorting the soul of the original work, it gives a contemporary rhythmic breath, develops the brass section … Franco, also nicknamed the “Grand Master”, the “Venerable Yorgho”, made the whole continent dance after independence, by telling the little dramas of everyday life. Heir to a Central African musical philosophy, he applied his traditional rhythms to the guitar. Ray Lema explained to us the importance of this artist in his personal journey. On this occasion, he also chose a few tutelary figures from his pantheon, from Beethoven to Fela Kuti, and detailed how their music inspired and forged him.

Read also Music – Samuel Nja Kwa: “I saw how musical this continent is! “

“When the Kinshasa JazzKif festival asked me to pay tribute to a great Congolese musician, I immediately thought of him! I rearranged nine of his tracks, and the recording of the live went so well that we released it on disc. Franco invented a very particular style of guitar in Congolese rumba: the sebene. A motif that supports the song’s trance moment, when each instrument is unleashed. Franco was an autodidact, he hadn’t received any formal education, he was a kind of bad boy from the neighborhoods of Kinshasa. At the time, we said that we should not follow his example, because he was a thug! People considered him a poor guitarist on the pretext that he always repeated this same musical motif. But he imposed it, and it became a style in its own right within the Congolese rumba. In 1974, I was appointed director of music for the National Ballet of Zaire (ex-RDC NDLR). I crisscrossed the country looking for musicians. After this experience, I realized the importance of Franco: his way of playing the guitar was a transposition of these traditional music, these rhythmic wheels. “

See Also:  Jeroen Kijk in de Vegte has 'consciously started to do less', but for the time being still on the radio - AD.nl.

“Beethoven, the first whose scores I studied”

“He is the first musician to have influenced me. At 13, I entered the minor seminary, determined to become a priest. We were given aptitude tests, and from my results, the priests concluded that I was a musician. I then started the organ, accompanying the Gregorian music. To develop my skills, the priests brought a piano from Brussels. Beethoven is the first musician whose scores I studied. I played her Moonlight Sonata for my first concert, I was soaked in sweat because I was so freaked out! Today, I continue to work on his works. He influenced me a lot in his way of composing, of thinking about music. Why does his work touch me? Trying to explain it is almost desecrate music.

All over the world, we study classical European composers, from Japan to China, from Brazil to Cuba… No doubt because these artists have developed instrumental technique at such a high level. Usually, a composer creates from his own music, depending on his mastery of the instrument or his voice. But these European musicians broke away from these limitations: by composing on paper, they wrote the music they dreamed of, imagining things that sometimes themselves could not play! Like a writer, who imagines, builds his story, free with his pen, ignoring the limits of reality. We thus play with the imagination of a human. It is the greatness of these musicians. Sometimes you have to spend months, even years, on the piano before you can master some of Chopin’s pieces. With Mozart, Beethoven therefore transmitted to me this passion for composition. “

“Jimi Hendrix, I felt like his guitar was singing more than himself”

“When I left the seminary, I no longer had a piano, my sister then offered me a guitar. So I became a guitarist, and I discovered Jimi Hendrix. He really captivated me, I felt like his guitar was singing more than himself! I became a rocker, in this very singing, speaking style. Today I don’t play too much anymore, because my music has often been criticized for going in all directions. When I started my career in France, Fnac said to my producer at the time, Jean-François Bizot: “We don’t know in which box to classify your musician, he is not really world music, because he are there passages of rumba, rock, traditional African… It cannot be reduced, be formatted a little? ” This is how, little by little, I was advised to head towards jazz. So I don’t really play rock anymore, but I still have my guitars. It would be difficult for me to launch a career in this style, I would face an audience who do not know me. And today, there is a certain silly and nasty rock that I don’t like: we hear the hum of guitars, but it’s the appearance of rock, not its essence. “

Read also Abdoulaye Diabaté: “Jazz is the backbone of Africa”

“Bill Evans, he makes all the harmonies sometimes with three notes”

“A jazz pianist is especially fascinated by the science of harmonies, and that of Bill Evans impressed me a lot. Jazzmen love dense chords, as if they could invent fingers to place more notes! Bill Evans makes all the harmonies sometimes with only three notes! His music sounds very clear while there are harmonies of extraordinary complexity. This blend of simplicity and sophistication is the quality of the great masters. Keith Jarrett is also in this line. He manages to make the piano sing, with his way of performing legato[linkthenoteswithoutinterruptingthesoundEditor’snote)wesometimesthinkwehearaguitar!IalsoworkedalotonthephrasingofOscarPetersonamonsterapianovirtuoso:theimpressionthattwopeoplewereplayingatthesametime![lierlesnotessansinterruptiondesonNDLR )oncroiraitparfoisentendreuneguitare !J’aiaussibeaucouptravaillélephraséd’OscarPetersonunmonstreunvirtuosedupiano :l’impressionquedeuxpersonnesjouaientenmêmetemps !

My passion for music is that of an instrumentalist. I spend my day on the piano, I immerse myself in this magical universe. It is a very complete instrument: you can do melody, bass, percussion … With its 88 notes, it is the most extensive instrument in the musical world. The piano is like a mountain: the more you climb, the more you see far, you discover fantastic landscapes. And it’s a wonderful revealer. Just by touching it, something awakens in you. You discover that the real instrument is the human. Playing leads to self-awareness, it’s fabulous. And to paraphrase Einstein, genius lies in work. Music requires concentration, patience, regularity, listening. “

Read also Seun Kuti: “We must know our own history”

“The first time I saw him was in Lagos in 1977, in his Afrika Shrine box in his Republic of Kalakuta. I accompanied Tabu Ley Rochereau and Franco who were performing at a festival in the Nigerian capital. We were then invited to discover the patron of popular music in the country. It was very impressive ! We land in this very dark box, invaded by a thick cloud of ganja, and we see Fela in underwear on stage, singing into the microphone of her saxophone around her neck… We were taped, intimidated, our elders Tabu Ley and Franco were nailed in place! Especially for Congolese musicians, whose appearance, extravagant clothes count a lot: here, the star plays in calbar! What a power to listen to this artist, with his brass and percussion sections, his voice and his red eyes like embers.

See Also:  Amanda Miguel says goodbye to her long hair, this is how she looks now

Later, in 1985 in France, we formed the Caravane Jericho group to demand the release of Fela, then imprisoned in his country. Once out, he came to Paris to thank us. He spoke like a pure British, whereas, on disc, he uses English bordering on pidgin. I asked him why. He laughed and confided to me: ‘Over there, when I sing, I embody my character! ” He was a great man, very educated and committed. He influenced me a lot regarding engagement. When we put on the glasses of our African culture, we see that the world capitalist system is the source of multiple misfortunes. I would like African artists to know their culture better, because we do not need to sink with the boat of wild capitalism. It is not ours. Another committed artist left a deep impression on me: Miriam Makeba. You could hear all the pain of his life in his music. “

Read also Orphan Afrobeat with the disappearance of Tony Allen