Popular TradingView analyst Oleg Zhukov (Trade_lab) explained when the price of the largest digital coins by capitalization may start to decline, and why this will happen

The opinions of experts may not coincide with the position of the editorial board. RBC-Crypto does not provide investment advice, the material is published for informational purposes only. Cryptocurrency is a volatile asset that can lead to financial losses.

Cyclicity is inherent in many economic phenomena, the stock market is no exception. Trend movements are inevitably followed by a period of “calm”, within which one has to be content with deals with a relatively small amplitude and a short-term time horizon for holding an open position. I believe that the current situation is conducive to a similar strategy in the cryptocurrency market in the near future.

The historical maximum for bitcoin falls on the date of the direct listing of shares of the largest US cryptocurrency exchange – Coinbaise, in this connection, the thought comes that the exchange principle has once again worked: “buy by rumor, sell after the fact”. Many events and expectations that previously supported the quotes of bitcoin and other cryptocurrencies are already in price. Consequently, there are fewer potential drivers for conquering new peaks in the foreseeable future.

It can be noted that bitcoin did not manage to gain a foothold significantly above the February highs, with each update of the historical maximum, the price direction reverses downward, this indicates the fixation of positions by relatively large participants. The decrease in April, in terms of amplitude in relative terms and the nature of the movement, resembles the correction that took place in February of this year. There is reason to believe that we will still see an entry into the $ 51,000 area and possibly lower.

The probability of the idea being realized is 65%.

The place of Ethereum no longer looks as stable in the long term as it did before. Competitors have become more active and are developing rapidly, and transaction fees on the Ethereum network have become noticeably more expensive.

Ethereum, like Bitcoin, has not clearly shown directional dynamics since February, in the event of a breakdown of the highs upward, a pullback is immediately observed. I suppose that the current consolidation will continue for some time, therefore, there is a possibility of a return to the lower border. At the same time, there is a divergence of extremes on the relative strength indicator (RSI), which also implies the prospect of a downward movement. 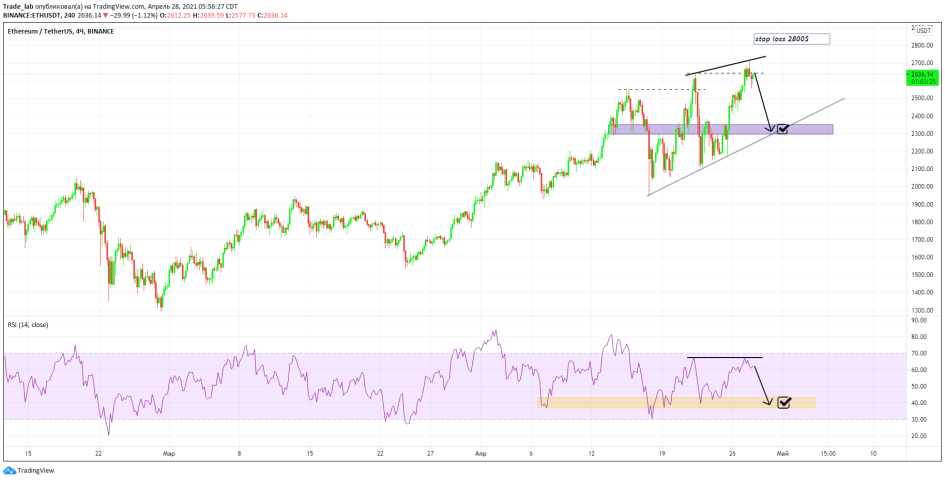 The probability of the idea being realized is 60%.

There are risks for the idea under consideration, they are primarily due to the global conjuncture. The fact is that there is a positive correlation between the cryptocurrency market and the stock market, for which the US Federal Reserve meeting will be an important informational event this week. The immediate dynamics of risky assets will depend on the comments and decisions of the monetary authorities. Ignoring the rise in inflation and Jeremy Powell’s dovish attitude could give another upward impetus for financial instruments with potentially higher returns, such as cryptocurrencies.

See Also:  Chilean retail had the highest global growth at the end of 2020 thanks to the withdrawal of funds from AFP | Economy

— How to properly invest in the DeFi sector

— How to collect a profitable investment portfolio from cryptocurrencies

— How you can make money with Binance Smart Chain tokens

You can find more news about cryptocurrencies in our telegram channel RBC-Crypto.