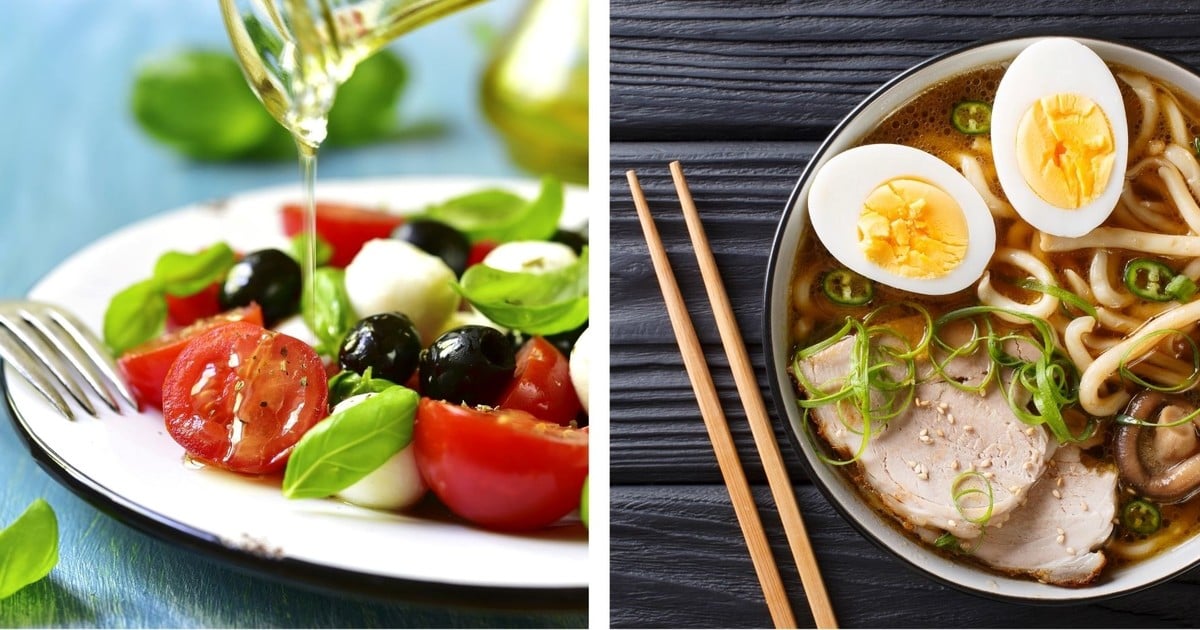 Which will be healthier, a bowl of lentils or a vegetable and tofu udon? What differences can we find between one dish and another? At the nutritional level, they are barely distinguishable. However, while lentils are a typical dish of Mediterranean cuisine, udon is a traditional Japanese dish.

For decades, concern about what we eat and the quality of the nutrients we eat have been part of the collective interest. Although it is no less true that, if we attend to the dietary customs of certain sectors of society, the acquisition of correct eating habits is still a pending subject.

What we eat has multiple implications. Scientific evidence and the World Health Organization place increasing emphasis on the role of diet in chronic disease prevention.

In addition, the ability of some foods to protect and prevent Facing different diseases both physically and mentally, it is widely recognized in the scientific literature. Over the past 50 years, numerous studies have evaluated the associations between food, food, or nutrient groups and chronic diseases.

The conclusion: a general consensus on the role of diet in the etiology of the most common chronic diseases, including obesity, cardiovascular disease, various cancers and type 2 diabetes mellitus, among others. All negatively affected by overfeeding.

Similarly, there is a growing interest in investigating the role that diet exerts on the mental and neurological diseases. Diet is an essential determinant of health, although it is difficult quantify the extent to which it prevents disease.

Surely, associated with the Mediterranean diet, we are all familiar with the percentage distribution of nutrients recommended by the World Health Organization’s nutritional pyramid to have a balanced diet.

The distribution that he proposes is, approximately, 55-60% of slow absorption carbohydrates, 12-15% of proteins and 25% of fats, mainly unsaturated. These percentages are normally distributed in three meals a day.

If we transfer these data to the daily amount of energy that a healthy adult needs with normal physical and intellectual activity, the recommendation is that a man consume around 2,300 calories per day average. Under the same circumstances, a woman should eat around 1,950 calories. Obviously all of this could be modified based on individual characteristics.

In Japanese dietary culture it is customary to eat small amounts of food with an important variety of them, several times a day, being able to consume up to 30 different foods each day. Of course, always in small bites or portions.

Not only the frequency varies. When comparing the contents of the Japanese and Mediterranean diets, we detected other interesting differences. For example, in the Mediterranean diet we found in a significant way the presence of dairy, eggs, legumes, coffee or unsaturated fats such as those provided by extra virgin olive oil.

Regarding the Japanese diet, the presence of algae (rich in proteins of vegetable origin, vitamins and fiber that benefit intestinal transit), those derived from soy (also very rich in protein), or green tea as a substitute for coffee.

Like the Mediterranean, Japanese cuisine is based on the incorporation of local products. Photo Shutterstock.

They also have similarities to take into account. Both forms of feeding share being healthy, varied and sustainable diets. Both also incorporate basic foods such as rice, fish, vegetables, fruits and vegetables typical of the regions of each country.

Consuming local products not only provides consumers with the recommended daily doses of vitamins and minerals as well as fiber and proteins to be able to lead a physically and mentally healthy life.

Simultaneously, it helps to maintain the local economy and conserve the environment. Among other things because avoid contamination derived from the means of transport and the consumption of plastic containers and wrappings or other materials that are difficult to recycle.

Both the Mediterranean diet and the Japanese diet should be understood not only as a set of foods, but also as cultural, healthy and environmentally friendly models, which have been passed from generation to generation for centuries. Not in vain, both populations are among the longest in the world, and, in addition to live longer, live better.

By Cristina Ruano Rodriguez, research doctor and associate professor in Nutrition, Pharmacology and Health at the University of Las Palmas de Gran Canaria. The original article was published in The Conversation.