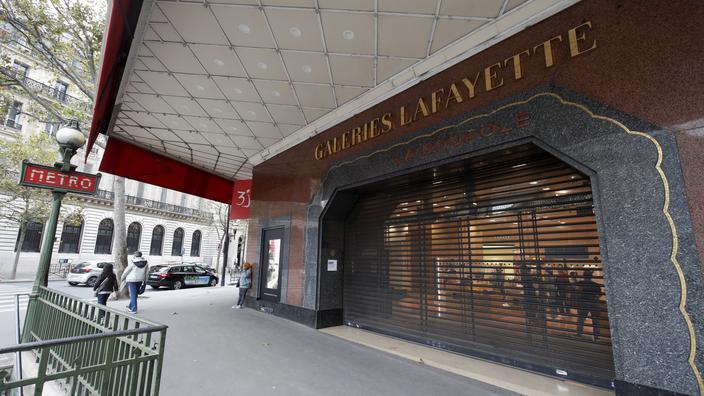 About 25,000 stores in more than 400 shopping centers are affected by the measures announced by Jean Castex on Friday.

From Sunday January 31, “non-food shopping centers of more than 20,000 m²Will close, announced the Prime Minister. What businesses are they? According to Jean Castex, it is the establishments that “promote the most mixing of population».

Read also :Trade: a closure in February would be less penalizing than in November

Concretely, these are closed shopping malls. In France, there are 858, according to the National Council of Shopping Centers (CNCC). More than half have an area greater than 20,000 m². In Paris, for example, the BHV-Marais (4th), Beaugrenelle (15th), Westfield Forum des Halles (1st) or even the Galeries Lafayette / Haussmann (9th) and Le bon marché (7th). In Lyon, the Confluence and La Part Dieu centers are targeted. In Marseille, Le Grand Littoral, Les Terrasses du Port or Valentine Grand Center are on the list.

But that does not mean that all the stores of these shopping centers will have to close from Sunday. Thus, only food stores (supermarkets, specialized stores) – which account for 11% of the turnover of shopping centers, according to the latest figures published by the CNCC -, as well as pharmacies, will remain open, announced Jacques Creyssel, president. of the Federation of Commerce and Distribution, following a meeting in Bercy. But their surface will still be taken into account to determine the fateful closing threshold. “The 20,000 square meters are calculated by adding all the surface areas of shops, food or not.», Specifies Bercy.

However, non-essential stores in these shopping centers will remain closed. Or about 25,000 shops (out of a total of 300,000 in France), according to the Federation of Commerce and Distribution. If they are not authorized to make “click and collect”, they will however be able to make deliveries. For them, the government has planned to pay them several aids: access to the public solidarity fund, recourse to partial unemployment paid for by the State and the cancellation of employer contributions. ” All these businesses and their employees learn on a Friday evening that they close on Sunday, deplores Procos, a trade federation. They finally only had a weekend of sales to sell their stock ».

Increased gauge for stores over 400 m²

The decision taken will also involve its share of absurd situations. “ The Fnac of rue de Rennes in Paris will remain open, but that of the Forum des Halles will be closed », Says Unibail Rodamco Westfield. The real estate company, which owns the Forum des Halles, Parly 2 or les 4 Temps, will have to close almost all of its French shopping centers.