For the master tapestry, which took her about 9 months, she made 11 types of stitches – 858 in width and 562 in height. The map has 144 embroideries from all ethnographic regions of Bulgaria, painted in 143 colors. 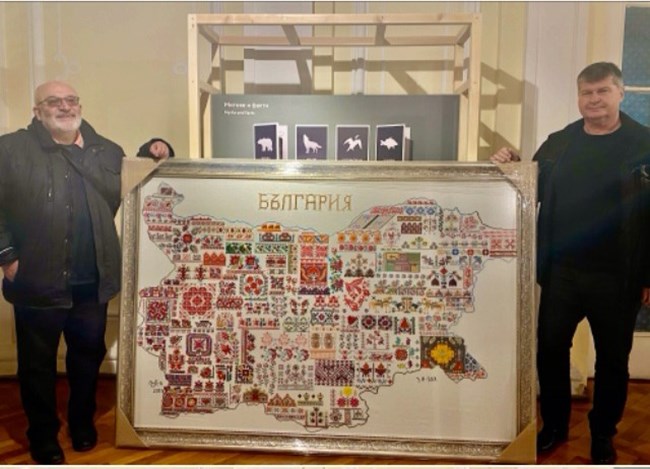 Prof. Dr. Ivan Gavrilov (right) presents the embroidered card to Prof. Dr. Vladimir Penchev from the Institute of Ethnology at the Bulgarian Academy of Sciences. 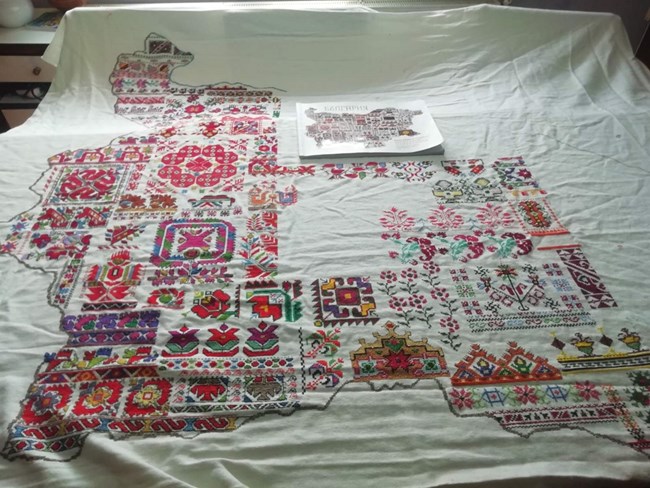 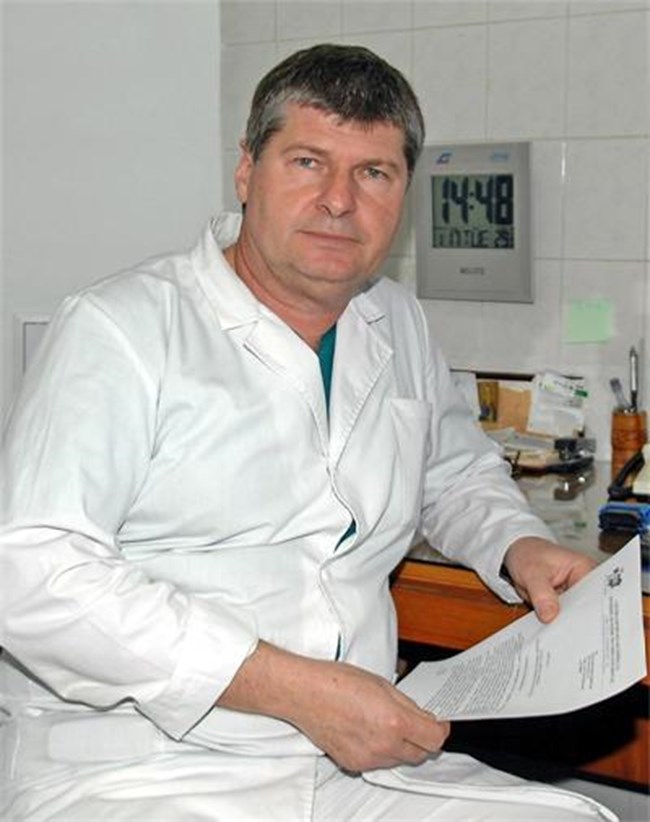 and the height – 165 cm. There is no such pleasure – said Velichka for “24 hours” – I almost did not eat or sleep. I abandoned the house and the garden, the meetings with friends. I’ve been thinking all day about how to finish the needlework. “

The inspiration came from her son – Prof. Dr. Ivan Gavrilov, head of the Department of Thoracic Surgery at USBAL oncology. The professor has long been known for his patriotic philanthropy, in which he involved his entire family – his sister Sashka, his wife and daughter – also doctors, and of course – his mother.

“One day last year he came to me with a big bag and told me – mom, there are patterns, threads, I want you to embroider this. He took out a sketch and a large piece of panama – 2 m wide, and nearly 2 kg of threads and put them in front of me. I call him, see how much only the threads weigh, it’s a lot of work, I’m 86, will I be able to finish it. And he said: “Start, when you succeed. But please start on March 3. ” How can I refuse him? ”The woman remembers.

And so it happened –

last year. “When the coronavirus started, my mother became depressed. He was crying all the time. All of us – my brother, his wife, his daughter, me – were at the forefront of the battle against the insidious virus. Mom was rightly worried about what would happen to us. By embroidering the card, my brother found a way to relieve it of stress “, says Velichka’s daughter – Sashka Gavrilova, a nurse in Montana.

Shortly afterwards, a pandemic was declared. “They closed everything and what can I do – sit and sew. And I say to myself – this occupational therapy is not bad, instead of waiting for the virus “, laughs Velichka.

For several months, embroidery kept in her head. “Spring has passed, summer has come, the coronavirus is not over. I returned from Montana to the countryside and hurried to finish the embroidery. Everyone was shouting at me: “Wow, Wieliczka, it’s very difficult, how did you get started”. I call them, “It may be difficult, but it’s good.” And they started helping me. Neighbors would not let me cook to sew. They brought me food, my daughter advised me about the threads because

I sew without glasses

and sometimes it’s hard for me to see

exactly the colors “, shares the author of the patriotic tapestry. “It’s good that they were the neighbors, otherwise I would have starved to death,” she jokes. For example, her daughter Sashka helped her to distinguish dark green from black. “I was just sewing – I slept a little and kept going. You can’t imagine what pleasure I felt – it will never happen again “, says Velichka.

She explains that the 144 embroideries woven into the textile picture correspond to the different folklore parts of Bulgaria. “Some are more colorful, others are more modest, some are easier, others are more difficult, but I did not give in to any of them. There is Bulgarian fire in each of them! ”Says the diligent woman.

Among the embroiderers who made it most difficult for her were those from Sofia and that of the Banat Bulgarians. “There were a few that I sewed for 2 days – they were so hard,” he recalls now.

Her son took the idea from one

Iren Velichkova-Yamami. She founded a Bulgarian embroidery club in the Land of the Rising Sun. She ignited the participants so much that she offered them to embroider together the map of Bulgaria with embroideries from all ethnographic regions. When it was completed in 2015, the card was a huge success. Irene publishes a manual in Bulgarian, Japanese and English “Bulgaria in embroidery”, in which she describes all Bulgarian stitches and explains their symbolism.

Such a guide, together with the linen cloth and hundreds of threads, is carried by Velichka’s son, Prof. Gavrilov.

This is not the professor’s first patriotic endeavor.

He is the metropolitan oncologist

which he does for various causes – sponsors the publication of rare books and performances, buys icons and crosses from their creators and donates them to churches and monasteries. His donations are already in 45 churches throughout Bulgaria – in his native Vasilovtsi, in Gorna Kovachitsa, in the Chiprovtsi monastery …

“All of Montana gathers at the concerts of the ensemble” Bulgare “on the square, which Prof. Gavrilov sponsors. It is a great experience. “People are looking forward to these concerts and they charge them for months,” say locals.

One of the people who inspired him for the Bulgarian cause is Nikolay Haitov. The two were close friends. One day Haytov and his wife went to visit Prof. Gavrilov in the village of Vasilovtsi. As the professor walked them around his home village, Haytov was curious to see the old church. When they entered the stone chapel, part of which is located underground, they found a complete ruin. “I hadn’t walked in a long time and I didn’t know he was in such a miserable condition.

blue eyes and said to me:

“How did you allow this shrine to collapse like that?” I made a vow that I would restore the temple “, says Prof. Gavrilov.

His charity has no end. Some time ago he donated the monetary value of one of his numerous awards to the school in the village of Gorna Kovachitsa, which needs renovation. Last year, for the second time, he donated funds to Chiprovtsi to send the children from the local school in Bucharest to places related to the history of Bulgaria. Shortly before that, the professor gave the school a portrait of Botev and a map of Bulgaria from 150 years ago, when the Bulgarian Exarchate was established. Every year, the professor gives scholarships to talented students at the Montana High School of Natural Sciences and Mathematics, which he himself graduated from. As a small thank you for his kindness, the locals make him an honorary citizen of Montana.

After graduating with a degree in medicine in Sofia in 1981, the future professor specialized in breast and lung cancer in Moscow and Illinois. He is the author of over 240 scientific papers and publications in Bulgarian and foreign journals, but he never forgets the place he started from. He examines women with breast and lung problems in Montana every month in addition to the 400 surgeries he performs each year. “About me

cancer is not fatal

as long as it is caught in time “, Prof. Gavrilov gives hope.

The story is a weakness of the talented doctor. “My grandfather died in the battle of Doiran. He knew he was going to perish. His villagers told him, “March, stay here,” but he left because “if I don’t, one day I will be ashamed of my children.” This is one of the stories that Velichka describes in her books “Pain” and “Vasilovtsi”, published years before she started working on the patriotic tapestry. They are inspired again by her son.

Velika finished the map of Bulgaria on the Day of the People’s Awakeners and ironed it carefully. “When my son from Sofia came to see me, I told him, ‘Vanyo, we have to keep this thing.’ And he told me: “We think the same, mom.

I plan to give it to

in Sofia.” He put a nice frame on it and carried it away. They accepted her there and said that she would soon be exhibited at the National Ethnographic Museum, “Velichka said.

Now she is a little sad that the time in which she embroidered Bulgaria has flown away quickly. “Sewing brought me such joy and inspiration that now I miss it. But I will find something else, I will not lose my job. This is my therapy against the coronavirus “, the patriotic teacher, who will turn 87 on March 8, is categorical.

“24 Hours” nominated Velichka Kamenova and Prof. Ivan Gavrilov for the initiative of the newspaper “Worthy Bulgarians”.