In “White Noise”, director Noah Baumbach adapts Don DeLillo’s novel of the same name from the 80s, which is considered unfilmable. In the complex drama, a married couple struggles with everyday life and their own fear of death. The satire deals with a whole hodgepodge of topics, but gets entangled in the process.

What do Adolf Hitler and the King of Rock’n’Roll Elivs Presley have in common? More than you might think at first glance. At least when it comes to the two college professors Jack Gladney (Adam Driver) and Murray Siskind (Don Cheadle) in the film “White Noise”. Gladney is the founder of the Department of Hitler Studies and a campus superstar. Siskind is an expert on pop culture icons and wants to achieve the same status as Gladney. In a choreographed scene, the two professors philosophize about what Hitler and Presley have in common. This scene is exemplary for several satirical, over-the-top moments in Noah Baumbach’s latest film.

Synopsis for the strip is not an easy task. The focus is on the Gladney family with parents Jack and Babette (Greta Gerwig). Adam Driver plays the intellectual suburban dad and his dad body, whom interviews say he drank from drinking too much beer. It is the fifth collaboration between Driver and director Baumbach. Greta Gerwig, who works here again with her husband Baumbach, delivers in her role as a mother with a penchant for psychotropic drugs. The house of the middle-class patchwork Gladney family is loud and hectic. The four children from different marriages complain, question the world and wonder about the indifference of their parents.

A poisonous cloud is gathering

The couple has little to counter their much more alert children with their 80s commemorative outfits (sun visors!). Jack and Babette much prefer to deal with their own finiteness and the fear of death anyway. Their conversations are mostly about which of the two will die sooner. The confrontation with death is then also the central element of the film.

A chemical spill throws a dark cloud over the Gladneys’ life

What you don’t need with all the fear of death is a deadly, poisonous chemical cloud. But that’s exactly what happens when a truck rams a train with dangerous goods and triggers a “toxic airborne event”. At this point, “White Noise” changes again and becomes a disaster and survival film.

“White Noise” is based on the 1985 novel of the same name by Don DeLillo. Due to its complexity, the material was long considered unfilmable. Unfortunately, director Baumbach confirms this to a large extent. He squeezes all levels and dimensions of the template into the film. Most of the themes from the novel of the 80s would still be relevant today. It’s about environmental destruction, American suburban life and rampant consumerism. In the end, however, the satire is charged and overloaded with allegories and motifs and intellectually overwhelming. You can see nuns doubting God, supermarkets as escalated temples of consumption and of course the constantly smoldering fear of death including psychopharmaceutical horror. 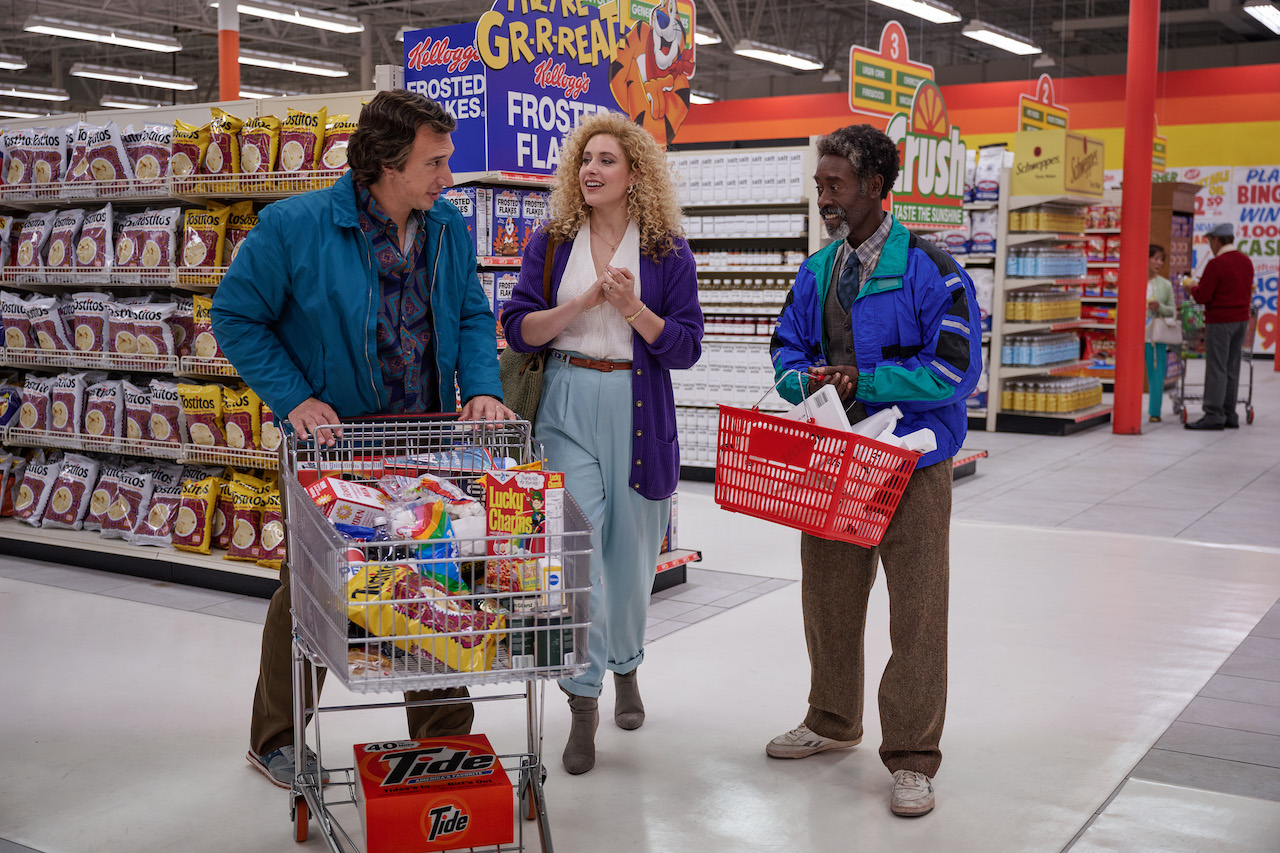 Baumbach is breaking new ground with the film. For the first time he filmed an existing material. He also filmed action scenes for the first time in his career. It’s loud. But Baumbach shows his strengths above all in the quiet scenes. Whenever the focus is on the Gladneys’ marriage, with its devoted, feisty and compromising moments, it works best. In the next moment, however, they are pushed to the side by another allusion, another oversized meta-level. This leads to the fact that the characters and their themes don’t matter until the end.

Stumbling over one’s own complacency

This time, too, he does not leave out one of Baumbach’s favorite topics: the intellectual elite, their own complacency and their inadequate view of life. But it’s precisely that intellectual complacency that the film itself falls into. Film fans will have a terribly nice argument about “White Noise”. Boring, tedious and narcissistic, some will say. Others will say that it is multi-layered, multi-dimensional and analyzing reality with razor-sharp precision. The comparisons with the corona pandemic write themselves. The truth, it probably lies somewhere in the middle. 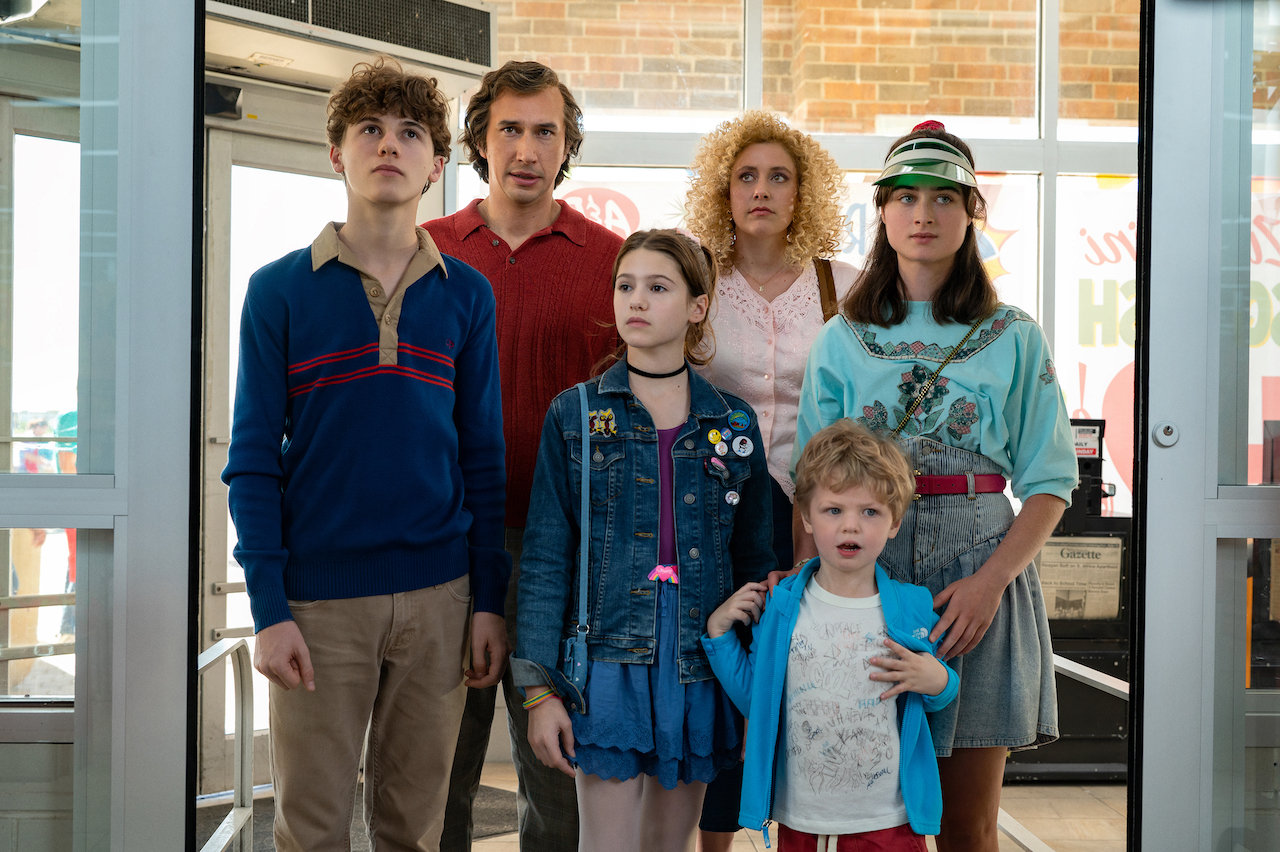 Adam Driver as Jack, Greta Gerwig as Babette, May Nivola as Steffie, Raffey Cassidy as Denise, Sam Nivola as Heinrich

In any case, there are individual scenes and dialogues on the plus side of the film. This includes a wonderful river crossing scene in a station wagon. But it remains with individual pop-up highlights. The bizarre and feverish scenes don’t really want to come together to form a complete work. So it goes on to another film highlight: a dance scene in the credits, which comes along with the first new song from LCD Soundsystem in five years. Until then, however, it takes 137 agonizing minutes.