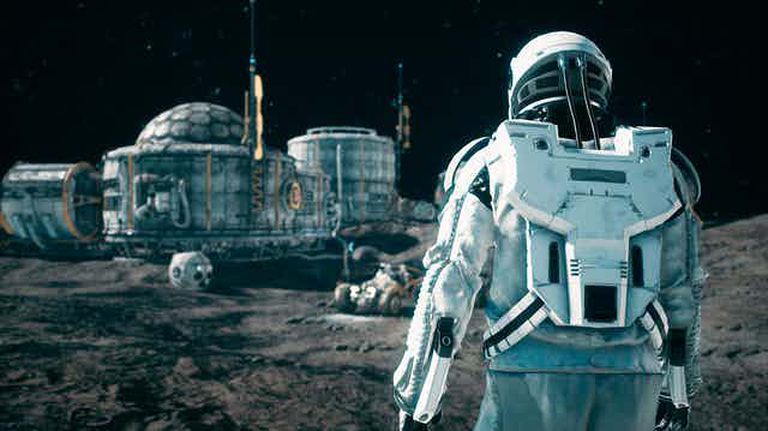 A space station on the Moon could be very useful. Future space missions could use it as an intermediate stop between Earth and a hypothetical destination even further away., so much inside the solar system as beyond, in the Milky Way.

One of the reasons we don’t build a space station on the Moon is that we don’t send people up there too often, because so far we have only managed to send astronauts six times. These moon landings took place in the three-year period between 1969 and 1972, and were part of a program of space missions called Apollo missions.

The type of rocket used to send astronauts to the moon, the Sarturn V, was extremely powerful, and is no longer manufactured. This means that right now we don’t have a rocket powerful enough to send people to the Moon (so we’re not even talking about building a space station there).

Although extremely powerful rockets are being built again. space exploration company Space X is creating new rockets that are larger and capable of carrying the weight of astronauts to the Moon. NASA, for its part, is also planning new manned missions to our satellite.

However, there is a big difference between taking a short trip to the Moon and building a space station on it, which is tremendously difficult. One way to achieve this goal would be to make the pieces on Earth, take them to the Moon and assemble them there. It would be to imitate the construction mode of the International Space Station. In that case, the pieces were taken into space and later assembled by astronauts aboard space shuttles.

But the International Space Station is only 400 kilometers from the Earth’s surface, while the Moon is at 384,000. Each trip to the moon would take about three days and would require huge amounts of fuel, which would not help the Earth’s climate change problem.

A much better idea would be build as much of the basic structure of the space site as possible with materials from the Moon itself. Lunar concrete, for example, is being tested on Earth to check its viability as a construction material.

On Earth, concrete can be made from cement, water, and gravel or sand. We don’t have any of this on the Moon, although we do have lunar dust and sulfur, which can be melted and mixed. When this mixture cools, a solid material remains it is even stronger than many of the building materials we currently use on Earth.

We also have to think about what would astronauts need to stay at the station. The most important thing would be to guarantee them food and energy supply, to run equipment and to produce food and breathable air.

There are scientists who investigate how to grow food in space. On the International Space Station, astronauts are conducting experiments to try to grow vegetables in capsules of earth. Another option is to grow plants by hydroponics, which is that the plants are grown in water, and not in soil.

Bringing energy to the Moon would be more complicated. The best way would be through solar panels, but the Moon rotates every 28 days. This means that if we build a fixed space station, said installation would be 14 days in the sun and 14 days in the dark (and without light, the equipment that worked with this energy could not work unless there was a huge improvement in the capacity to store energy in batteries).

One way to get around this problem would be to build the space station near one of the Moon’s poles and extend the solar panels there. In this way, these panels would receive sunlight constantly to the extent that it could rotate and would not be blocked by the satellite itself.

And as an alternative to all of the above, we should keep in mind that we might not need to build any kind of station on the lunar surface. In stead of, NASA is considering building a satellite and placing it in orbit of the Moon. And it is that the rockets that are launched from its surface use a lot of fuel to escape from their orbit, but this would not be a problem if they were launched from a satellite. Thus, this could even be better than a base on the ground; it could become the starting point for missions whose destination was much further away, in the depths of the solar system.

This text is reproduced from The Conversation under a Creative Commons license.