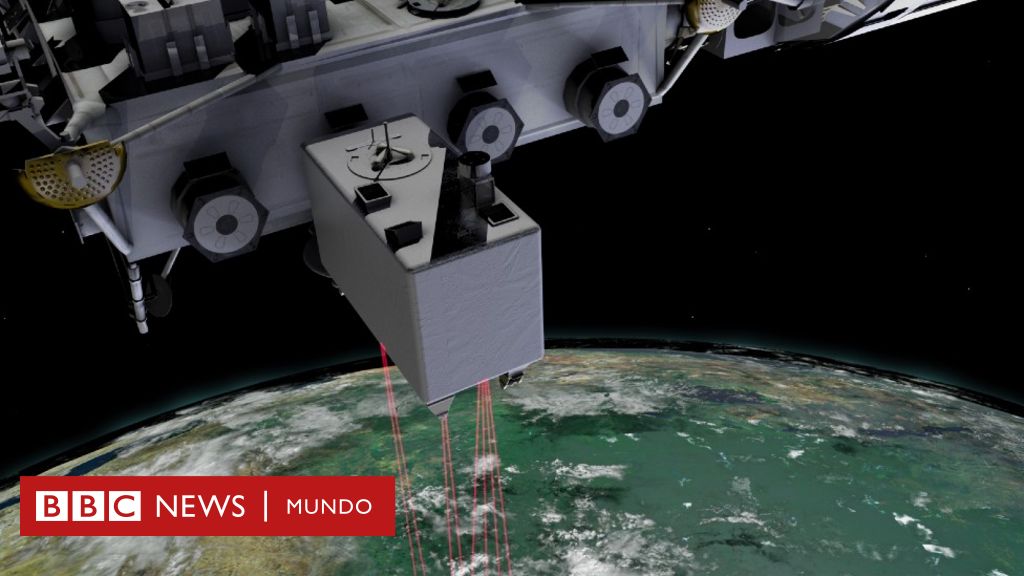 At this very moment a shower of laser pulses is arriving at Earth from the International Space Station.

And his goal is to reveal even the most intimate secrets of the planet’s forests.

The GEDI mission, jointly developed by NASA’s Goddard Space Flight Center and the University of Maryland, enables obtain unprecedented 3D maps of forest areas even in the most remote places.

“It is a satellite the size of a refrigerator, weighs about 500 kilos and is attached or connected to one of the modules of the International Space Station,” Spanish scientist Adrián Pascual, a member of the GEDI scientific team, an expert, explained to BBC Mundo. in mapping and management of forest ecosystems and professor at the University of Maryland.

Mission data is critical to understanding how much carbon forests store and what impact deforestation has on the fight against climate change.

But the future of GEDI is uncertain and currently a campaign seeks to ensure the continuity of the mission.

GEDI is the English acronym for Global Ecosystem Dynamics Investigation o Research on the Global Dynamics of Ecosystems.

The heart of the program is an instrument that shoots lasers and has been attached to the International Space Station, ISS, since 2019.

“The ISS orbits the Earth nonstop. And our GEDI satellite emits laser pulses all the time,” said Pascual.

These pulses of energy allow to determine not only the height of the trees but the structure of the forests.

“When this pulse of energy reaches the Earth, it hits the first element it finds, which is the treetops, and continues to progress until it hits the ground.”

“The sensor measures the difference between when it detects the tops of the trees and the ground. And converting that time period into distance we are able to estimate the height of the vegetation“.

To reveal the composition of the forest, GEDI researchers study changes in energy wave patterns.

“We are able to estimate different levels of vegetation and that gives us an idea not only of the height of the forest, but of its structural complexity”.

GEDI uses a remote sensing technology called LIDAR, which basically consists of pointing a laser at a surface and measuring the time it takes for it to return to its source.

It is not a new technology. “But this technology had never been placed on a satellite and taken to the International Space Station and executed at more than 400 km high to specifically monitor forests,” says Pascual.

Trees capture CO2 or carbon dioxide, one of the main greenhouse gases responsible for climate change, from the atmosphere.

And they store much of that carbon, preventing it from being released into the atmosphere.

“When trees grow they increase their biomass. And approximately 50% of that biomass, of the wood of those trees, is carbonPaschal pointed out.

“It is calculated more or less that a medium-sized tree, the most general thing that can be thought, fixes about 25 kg of carbon dioxide per year.”

“We use GEDI then to know what is the stock, the carbon storage that currently exists in all the world’s forests.”

The role of GEDI in the fight against climate change

The data and maps generated from GEDI are publicly available.

And they are vital for governments around the world to realistically know their ability to store carbon.

“In the case of many ecosystems, it is not known how tall the trees are or what the forest is like,” Pascual explained.

“There are areas in the Amazon or in remote places, where we do not know how tall the trees are and how the biomass is distributed“.

GEDI makes it possible to detect and quantify changes in biomass resulting from forest fires or illegal logging.

The GEDI data also reinforces the importance of preserve the world’s mature forestsinstead of prioritizing only new forest plantations.

Many countries include tree planting in their CO2 emission reduction plans.

“It is true that more trees must be planted as part of the solutions to combat climate change, through restoration projects on degraded areas that have the potential to return to vegetation,” said Pascual.

However, “for many small trees to replace the carbon that a very large tree has stored, many small trees are required, time, and that there are no phenomena in the middle such as a felling, a fire or an attack by pests.”

“We cannot fall into the trap of thinking that we can replace large stocks of carbon like in the Amazon, where there is a large amount of carbon stored, through plantations and restoration projects.”

The carbon stored in forests is also not only found above ground.

“Beneath it, in the roots of the trees, the amount of carbon can be up to almost double what we are able to predict with GEDI. That is why it is vital to protect the ‘lungs’ of the Planet”.

The campaign to save GEDI

Developing GEDI and understanding how its technology works from a space station took nearly 20 years of previous work. Numerous scientific studies were led by researchers such as Ralph Dubayah, GEDI principal investigator and professor at the University of Maryland.

The mission is scheduled to be operational only until the end of 2023, when GEDI would be replaced by another instrument on the International Space Station.

Both researchers and government representatives currently support a campaign to extend the life of GEDI in space.

“Climate change will affect more people and countries from underrepresented and low-income groups. Free GEDI data can make a difference in supporting policy and research in low-income countries.”

On the other hand, “the carbon market is very hot right now and many companies are emerging that calculate the carbon stored in the forest or in reforestation and afforestation projects to sell carbon credits.”

Adrián Pascual told BBC Mundo that “there is a strong push from the international community to keep GEDI longer. Because every week that it is up there we have thousands and thousands more observations that allow us to arrive at better estimates of vegetation height and biomass.”

“It’s a very big opportunity that we have to be able to keep it for a few more months or years, because we really don’t know when another possibility like this will exist again.”

Gold continues to collapse.. the price of gold today, Friday, August 12, with the beginning of trading