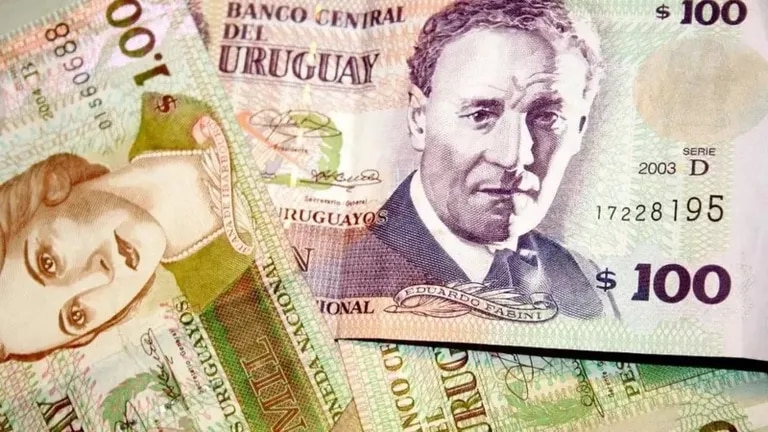 Uruguay looks like an extraordinary country when its pesos are converted to dollars. The Uruguayan minimum wage is equivalent to about 477 dollarsnearly double that of countries in the region with larger economies such as Brazil, Mexico or Colombia.

In Uruguay too The most expensive Big Mac hamburger in America and the third most expensive in the world is sold (at $6.1)according to the latest index of the British magazine The Economist published in July.

Its capital, Montevideo, is one of the Latin American cities with the highest cost of living for foreignersaccording to a recent study by the firm Eca International.

Behind these data there is a striking phenomenon: the strength of the Uruguayan peso against the dollar.

Uruguay has the best performing Latin American currency against the US currency so far this yearaccording to Bloomberg Economicswith a 10.1% appreciation since the beginning of 2021 until last Friday. In fact, the Uruguayan peso appears in that ranking as the fifth currency that has gained the most value against the dollar in the world during 2022.

This contrasts with the decline that other currencies had this year against the dollar, from the Colombian or Chilean peso to the euro.

Experts offer different explanations for such a display of strength in Uruguay’s currency. But they disagree on the essential: Is this South American country of 3.5 million inhabitants handling monetary policy well?

One of the reasons that are usually pointed out for the fact that the price of the dollar in Uruguay has fallen, from around 44 pesos at the beginning of the year to around 40 pesos these days, is commercial. Between January and July 2022 Uruguay exported 36% more than the same period last year, in a context of rising commodity prices which favored sales of country products such as soybeans, meat and cellulose.

This means that the Uruguayan economy receives more dollars for these sales and, by simple law of supply and demand, this depreciates the US currency in the local market.

On the other hand, the political stability Compared to other countries in the region, Uruguay tends to strengthen its currency, says Arturo Porzecanski, an expert in international finance and Latin American economics at the American University in Washington.

In his opinion, one of the main reasons for the appreciation of the peso is that The Central Bank of Uruguay (BCU) significantly raised its reference interest rate: from 4.5% at the beginning of August last year to 9.75% today.

This increase sought contain inflation in the country, which reached 9.56% in the last 12 months. But it also made the dollar less attractive to investors, because they improved their profits by positioning themselves in pesos.

“There are not many other countries in Latin America or the rest of the world where one can say that the Central Bank is avoiding having a negative interest rate, that is, below inflation,” says Porzecanski, who sees this as a sign seriously.

However, other economists consider it a error that can impact production and employment in the country.

“Uruguay did something spectacular in these six months so that its currency appreciates 15% against the main world currencies? It is not self-inflicted harm”argues Javier de Haedo, a former Uruguayan Vice Minister of Economy.

“It doesn’t have any technical basis, that,” says De Haedo to BBC Mundo.

In its Big Mac index, which shows the balance of currencies based on the cost of the famous hamburger in each country, The Economist indicated that until June the Uruguayan peso was 18.1% overvalued against the dollar. And, adjusting the cost per GDP per capita, he suggested that the Uruguayan currency would be the most overvalued against the dollar (49.2%) among the 52 currencies measured around the world.

Many seek to reap the benefits of “cheap dollar” In uruguay. On your winter vacation in July, more than 180,000 Uruguayans (5% of the country’s total population) traveled abroad. The vast majority of them went to neighboring Argentinawhich has cheaper prices in dollars due to its economic crisis and the devaluation of its own peso.

At the San Martín border bridge there were lines of more than three kilometers of vehicles from Uruguay to cross into Argentina.

But others warn that the appreciation of the Uruguayan peso lower competitiveness of some sectors of the local industry with increasing production costs in dollars.

The Union of Exporters of Uruguay (UEU) expressed in June its “enormous concern” about the drop in the price of the dollar in the local market and noted that “There are companies that have already decided to close their business” in the country due to the loss of competitiveness.

One of them was the metallurgical company Cinter Aperam, a manufacturer of auto parts, which announced the cessation of its operations in Uruguay with some 150 workers affected, to concentrate on Brazil.

“When these phenomena happen and we are out of alignment with what is happening in the world (…) we have a drop in what we produce in certain areas and that ends up affecting the amount of employment,” says María Laura Rodríguez, an economist at the UEU , a BBC Mundo.

Another sector where they look with concern at the increase in prices in Uruguayan dollars is the turismoan important pillar of the country’s economy that has felt the blow of the pandemic and now may suffer a decrease in foreign visitors, especially from Argentina.

However, in general terms, Uruguay maintains a balance of payments without major imbalances while its economy expands.

The center-right government of Luis Lacalle foresees that GDP increases 4.8% this year, with the creation of 40,000 jobs.

Thus, specialists predict that if the current internal and external scenario persists, in the coming months the Uruguayan currency could vary slightly against the dollar, without large jumps. “Most likely,” says Porzecanski, “is that the peso against the dollar depreciates, but little”.

6 ways to keep your sanity on the road