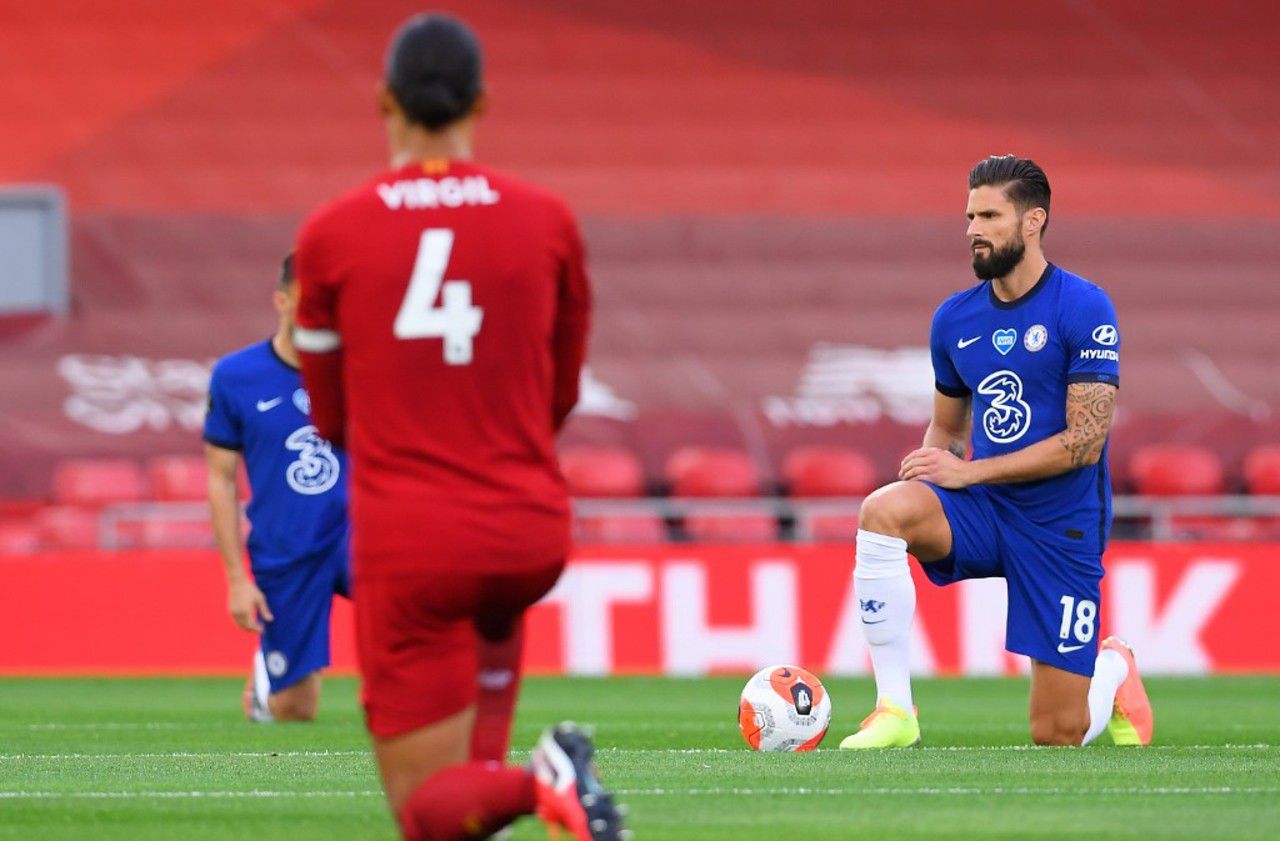 An unprecedented gesture to protest against the shooting of the American police on Jacob Blake. The basketball players of the Milwaukee Bucks NBA team boycotted their playoff game Wednesday, bringing with them soccer, baseball and the Cincinnati tennis tournament.

Since the return of the competitions, sport is committed across the world: knees on the ground, jerseys bearing the message “Black Lives Matter” when the English championship resumed on June 17, in support of the anti-racist movement, after the death of George Floyd, an African-American victim of police violence. “I’m not surprised to have seen the Premier League show sensitivity to the subject. But this decision taken in England, I am not sure that it can be done in France ”, assures Claude Boli, sports historian, specialist of black populations in Europe.

The return of the French Championship was indeed not accompanied by such gestures. The spirits are elsewhere. “We think more of the Covid than that. To be honest, we never really talked about it, ”blows a Ligue 1 player. Since the resumption, the litany of cases of Covid-19 contamination has punctuated the first steps of L1.

But the explanation does not stop there. Patrick Clastres, sports historian, points to certain cultural elements: “The United States and the United Kingdom are countries which were built on the community principle, while in France we live on the principle of freedom, equality, fraternity. It may be a republican illusion, but it remains deeply rooted in the minds of the population, among athletes and footballers. “

Claude Boli notes these same differences, but points to the delay taken by France in the fight against racism in football: “In the United Kingdom, an organization like Kick It Out (Editor’s note: initially created under the name of Let’s Kick Racism Out of Football, let’s chase racism out of football) has existed for nearly 30 years and today fights against all forms of discrimination. “

A commitment from French football would be necessary for the doctor in contemporary history because “structural racism is very present”. “It translates for example by an essentialization of positions, at the level of words, the way of describing a black player as more agile, a white player as smarter”, decrypts Claude Boli.

A day organized every year

For its part, the Professional Football League tries to promote its actions. Days against all forms of discrimination are organized, including that against racism is set for the 20th day of Ligue 1 and Ligue 2. The clubs are, for their part, free to go further if they wish. Clermont Foot had taken the initiative to drop a knee to the ground before the kickoff of his meeting against Troyes on January 10.

A desire of the leaders to mark the blow against racism, explains Cédric Hountondji, defender of the Auvergne club. “We were not in the same perspective as those who also made this gesture after (Editor’s note: with the BLM movement), but in the end, some points come together, ”says the player.

Clermont Foot and Troyes players are gathered in the central circle, as part of the fight against racism. The Clermontois decided to put one knee on the ground. #CF63ESTAC pic.twitter.com/4p7KrvDYKD

In this context, the recent initiatives of some footballers clash. Idrissa Gueye drew attention by putting her knee to the ground during her celebration against Le Havre (0-9), on July 12. An instinctive gesture against racism, explains those around him. Within PSG, Layvin Kurzawa took part in the rally organized by the Adama Traoré collective. Kylian Mbappé had shown his support for the Black Lives Matter movement through social networks.

“Minorities are on the ground and invisible in the offices”

Because committing alone as an athlete is not easy. “Public opinions are acquired in the utopia that sport and football are spaces without political stakes”, explains Patrick Clastres, before adding: “Athletes are minors, they do not have the same rights as other citizens at the level of engagement. They are linked to clubs, have contracts. On the other hand, some brands see that we can bet on a commitment at the marketing level, at that time the athletes have the support of the sponsors ”, tempers the historian.

For a momentum to be organized, the mobilization should not come just from the players, assures Cédric Hountondji. “If part of Ligue 1 and Ligue 2 gets going, eventually, I think the clubs will be forced to engage in this area,” judges the defender of Clermont.

A broad commitment without which the fight against racism in football will not be able to really evolve, according to Claude Boli: “We always talk about turning points. Often, we highlight France 98, but we see that things have not really changed. Minorities are on the ground and invisible in offices. “For the researcher, this fight will not necessarily go through slogans at the start of the match,” especially if it is to give yourself a clear conscience and move on afterwards “. This advocates substantive work by “associating the League, the federation, educators, researchers who really know these issues. “