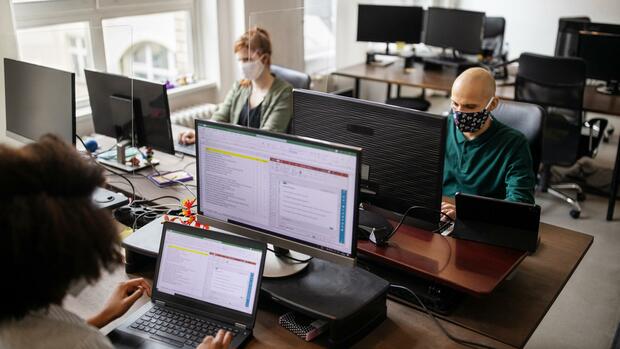 Frankfurt The news is causing great nervousness among real estate investors – and causing anticipation among some employees: In recent weeks, more and more companies have announced that they will be relying more on home offices in the future.

There are doubts in the real estate industry that a dramatic change is imminent as a result. Many are convinced that the office in the city is far from being obsolete. But it will change – over the coming years.

Theoretically, lower rental costs could save costs in one fell swoop, admits Matthias Leube, CEO of the commercial real estate service provider Colliers International, but “in practice you can’t simply reduce office space by ten to twenty percent,” he says. The separated areas would ultimately have to meet certain requirements, such as having their own access or sanitary rooms.

In any case, there should be no pressure to act for many companies: rental contracts for office space usually run for ten years. This gives many companies time to analyze the situation. “Profound changes are usually only made when the contracts expire,” says Stephan Leimbach, who is responsible for the office rental business at real estate consultant JLL. “Who wants to restructure twice and waste money with it?”

Some companies that are about to make a decision have already played it safe: They stopped moving plans and extended their existing lease, according to the industry. Together with the restrictions caused by the lockdown, this had drastic consequences: The demand for new office space collapsed in recent months.

Real estate expert Thorsten Lange from DZ Bank expects – like many in the industry – that demand will normalize again sooner or later, although “an overall moderate decline in demand for office space due to home office is most likely”. There are several factors that speak against the fact that offices are being phased out – not least because rent costs are usually lower than other items such as staff.

See Also:  Moderna announces that its vaccine for covid-19 is 94.5% effective

Satisfied in the home office

According to a survey by the Fraunhofer Institute, Germans get along with the home office better than expected: The satisfaction of both team members and managers is 90 percent – in all industries.

And it is not just the satisfaction of the employees with their situation that has increased. “The individual performance and the performance in the team are now also better assessed,” comments Wolfgang Prinz from the Fraunhofer Institute for Applied Information Technology FIT on the results.

Initial problems caused by communication difficulties are apparently largely overcome. Social contacts are often missed. Nevertheless, the compulsion to work from home showed significantly more positive aspects than expected. “For companies there is no easy way back to old office routines,” concludes the institute representative, Prinz. “Instead, flexible concepts have to be developed that meet the requirements and wishes of employers and employees alike.”

Exactly what concepts these are is currently being discussed a lot. On the one hand, there is an expectation in the industry that the office of the future will not take up less space. Real estate managers are unanimously of the opinion that in the future we will need more and larger rooms for project work and meeting rooms – especially when employees work from home a few days a week.

“If I were to reschedule our office in Frankfurt, the already spacious café area would be even bigger,” says Alexander von Erdély, head of the real estate service provider CBRE Germany. And that although he decided against changing the way he worked.

“We at CBRE Germany do not want to rely more on home office, because we need the collaboration of our employees, and this creativity comes mainly from working together on projects,” he says. He expects that other companies will ultimately decide against letting their employees work more from the home office – and there have been examples of this in the past.

The best-known case is likely to be the US technology group Yahoo. When US manager Marissa Mayer became boss there in 2013As one of her first decisions, she stopped the home office culture that prevailed there. It is absolutely necessary that all employees are present in the office, she informed the 11,500 employees in an email, and some of the best decisions and insights come from conversations in the hallway or in the cafeteria. Speed ​​and quality would often suffer when working from home. In addition, personal contact between employees promotes the community spirit.

An argument that JLL manager Leimbach can understand. “The office is a central point of contact, it creates identity”, it has “the function of a village square, a campfire: People gather there and exchange ideas.” Colliers manager Leube shares this view. “How do you create a corporate culture if employees don’t get to know each other personally enough? How do you create cohesion? How do you train new employees? ”

These factors are important for retaining and attracting employees. There are people who value work in the home office, he says, “but there are also many people who see their work colleagues as a kind of second family and do not want to work completely from the home office in the long term or do not even have the living space and the opportunity to retreat “, he says.

And you shouldn’t forget the legal effects of introducing home offices – for example, the right to work materials such as a screen and printer. Working from home can also have consequences under insurance law.

See Also:  RegioJet trains are to run between Warsaw and Krakow. There is a timetable proposal

In addition, demographic changes such as the move towards a service society speak against the fact that the demand for office space will collapse in the long term. Ten years ago around two million people studied in Germany; today there are three million. “Most of them will probably not work at a workbench after completing their studies, but in an office,” says Erdély’s head of CBRE Germany. In his opinion, the demand for office space could end up being “95 to even 105 percent of the pre-Corona times”.

Finally, there is another factor that creates confidence in the real estate industry: the low supply. “Never before have we had so little supply on the market with such low vacancy rates after a crisis,” says Colliers manager Leube. In large German cities, a little over three percent of the office space is theoretically free.

But the number is deceptive; in many places there is no offer. After all, many areas are being renovated, can no longer be rented at all or do not meet the tenants’ wishes. “There used to be five serious prospects for coveted properties, now there are only two,” says JLL manager Leimbach. “But that is still more demand than supply, which is why the corona crisis is not yet reflected in prices.”

More: World of work after Corona: what will the office of the future look like?

Click here for Handelsblatt Inside Real Estate, the exclusive specialist briefing on the future of the real estate industry