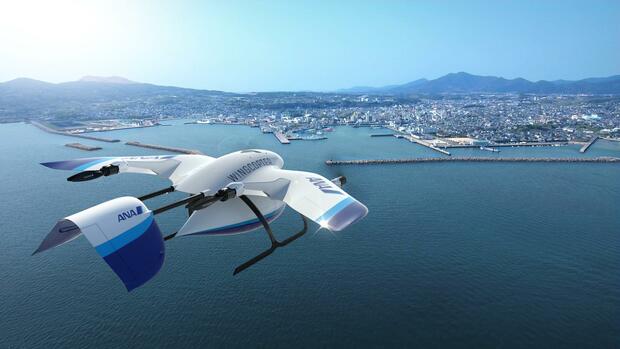 Tokyo, Frankfurt For the German drone manufacturer Wingcopter, Japan is going from a test flight laboratory to business. On Thursday, the largest Japanese airline ANA announced that it would use Wingcopter to set up a drone delivery service, which is due to start operating in 2022. Everyday goods and medicines are to be transported to remote mountain regions and islands.

“The ongoing tests of the Wingcopter aircraft are a significant step forward in creating a viable drone transport network,” said ANA Vice President Tetsuya Kubo in a press release.

Neither side gave any information about the extent of the partnership. It was agreed not to say anything about the number of drones or the financial volume, said Wingcopter boss Tom Plümmer to the Handelsblatt.

“But ANA is specifically planning to set up regular, commercial delivery routes and hubs all over Japan, and our Wingcopter are a central component of this strategy,” continues Plümmer: “We are very proud that ANA is Wingcopter as an elementary partner for it Decided the project. ”

And the CEO and co-founder of the start-up gave a few more details: “We will carry out further pilot projects together in the coming months and already next year we will be offering regular commercial deliveries by Wingcopter to various regions of Japan with ANA.

For the expansion of the cooperation, the “next, even more efficient generation of the Wingcopter, which we will present to the public in the coming weeks” is planned.

Wingcopter is one of the most promising German suppliers of delivery drones. Plümmer thinks big, thanks in part to development partners such as the US parcel service UPS. In January, the start-up from Weiterstadt in Hesse announced a financing round of 18 million euros and announced that it was preparing for series production.

Not only in Japan does the Wingcopter boss rely on partnerships like the current one with ANA. “We are also in talks with various potential partners regarding similar collaborations in other countries, including the USA, Asia and Africa,” said Plümmer and added: “It is always important to us that we are true to our vision with sustainable, Drone-based innovations can improve or even save people’s lives. ”

Among other things, Wingcopter took part in the start-up program of the chemical and pharmaceutical company Merck. Together with the state development agency GIZ, the company tested the use in Malawi, for example, where the drone delivered medicines in the rainy season.

The most important step for commercial use is broader approval. A registration process is ongoing in the US, along with only nine other providers. So far, safety concerns have been one reason why drones are only used over uninhabited or sparsely populated areas and bodies of water.

The partnership with ANA is an important step towards expansion in the Japanese market for Wingcopter. The company has been active there for a long time. For example, the start-up on the southern island of Kyushu has tried out a delivery service with local governments of remote islands and the mobile operator NTT Docomo.

At an award ceremony a year ago in Tokyo, Plümmer was enthusiastic about the country as a possible drone market. “Japan is really incredibly exciting,” said the Wingcopter boss to the Handelsblatt.

The government has long been promoting drone services with money and new rules. Because the economic planners see the danger that the pioneers of drone technology will suddenly be left behind by Chinese manufacturers such as the world market leader DJI or the online giant Amazon.

Wingcopter concept stands out from the competition

Japan in particular expects a lot from airborne parcel services. The market research institute Impress Research already estimates that the market for drone services in logistics will grow from 1.5 billion yen, equivalent to 11.5 million euros, to 79.7 billion yen between 2019 and 2025.

The competitors position themselves accordingly. The engine and motorcycle manufacturer Yamaha, which has been supplying unmanned mini helicopters for agriculture for decades, is further developing its technology. In addition to ANA, the Japanese Amazon rival Rakuten, technology groups such as NEC and Sony as well as logistics companies want to enter the business with autonomous aircraft. Most interested parties, however, rely on helicopter-like devices with four vertical rotors providing lift and propulsion.

However, as an airline, ANA is particularly fond of the wingcopter concept, which with its rigid wings is most reminiscent of an airplane. The German drone also has four rotors, but they can be tilted. In this way, the drone can take off vertically, stand in the sky and, if necessary, rappel down its load with pinpoint accuracy.

In flight mode, however, it becomes an energy-saving mini-airplane and can cover longer distances than a quadrocopter at speeds of up to 240 kilometers per hour. The drone has a range of 120 kilometers.

Wingcopter will not only bring the hardware into the project, but also offer support in the training of pilots, mission planning, operational design and maintenance. In March, the two partners started an initial test phase in Nagasaki Prefecture.

In the mountainous island nation of Japan, whose rural communities are also rapidly depopulating, drones are an important means of improving medical care in remote areas. The airline now wants to use the tests to find out which types of drones are best suited for use in which regions.

Time is of the essence, because the Japanese government now wants to grant commercial air traffic in near-Earth airspace from 2022 with new laws. In the future, the drones should then be able to fly without sight in more densely populated areas.
Collaboration: Christoph Kapalschinski