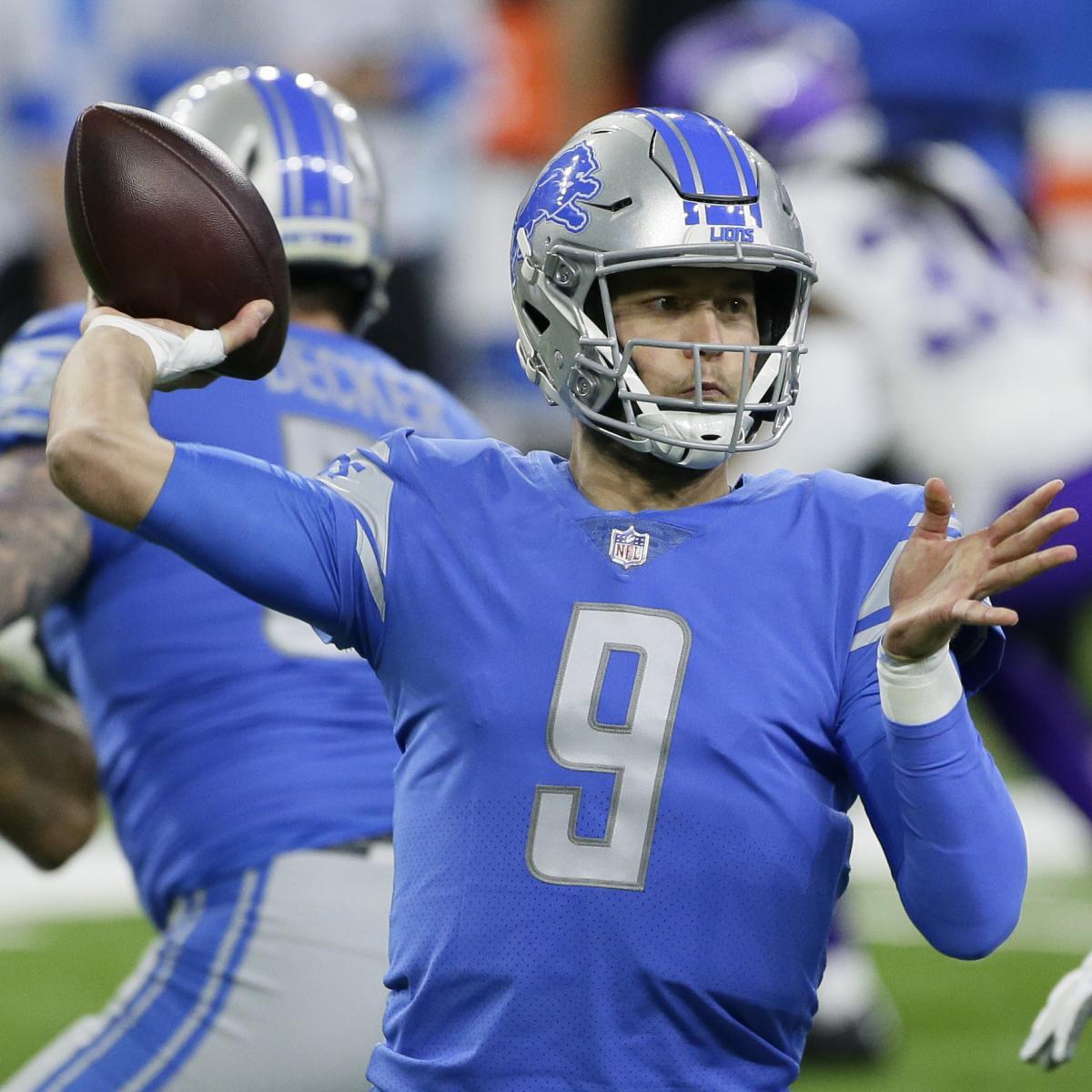 The Los Angeles Rams pulled off a blockbuster deal with the Detroit Lions that drops the first domino in this year’s quarterback carousel.

According to NFL Network’s Tom Pelissero, the Rams sent quarterback Jared Goff, their 2021 third-round pick, 2022 first-rounder and 2023 first-rounder to the Lions in exchange for quarterback Matthew Stafford. The deal will not be official until the new league year.

Following the Rams’ loss to the Green Bay Packers in the divisional round of the 2020 playoffs, NFL Network’s Steve Wyche reported a source told him that Goff and head coach Sean McVay needed “marriage counseling.”

McVay and general manager Les Snead had been noncommittal about Goff as their starter for the 2021 season. Now, we see why they wouldn’t attach the team’s immediate future to him.

The Rams chose to pivot for Stafford, who’s dealt with injuries over the last two terms, though he can still sling the ball all over the field and move a little more than Goff in the pocket.

Let’s take a look at the biggest winners and losers of the deal.

Matthew Stafford should feel relieved. Last week, he and the Lions agreed to part ways, which opened discussions for a trade, per Pelissero.

The Lions moved swiftly, and Stafford gets a one-way ticket out after 12 seasons with a franchise that hasn’t won a playoff game since 1992. Although he’s made three postseason trips with the club, Detroit hasn’t been able to put a complete team around him.

For the most part, Stafford had to put the offense on his shoulders. He’s played with just one 1,000-yard rusher—Reggie Bush in 2013—and one defensive unit that ranked in the top 10 in scoring.

Stafford will join a club that clinched a playoff berth in three out of four seasons under McVay, who’s also fielded a top-10 ground attack in three campaigns. In 2020, the Rams finished with the top scoring defense under former defensive coordinator Brandon Staley, who accepted the Los Angeles Chargers’ head coaching job earlier this month.

Still, with two star defenders in cornerback Jalen Ramsey and defensive tackle Aaron Donald, Stafford probably won’t have to score 30-plus points to win games. He’ll have a complementary rushing attack and a decent defense.

In Los Angeles, the wheels fell off of the Jared Goff train quickly. Two years after a Super Bowl appearance, the Rams cut ties with him after consecutive inconsistent seasons.

In 2020, Goff threw for 20 touchdowns and 13 interceptions. In December, he broke his right thumb and sat out of the team’s Week 17 game against the Arizona Cardinals. John Wolford started and led the Rams to victory.

Although Goff was cleared to play against the Seattle Seahawks in the Wild Card Round, McVay opted to start Wolford, who went down with a neck injury early in the game. Los Angeles won the contest, but some wondered why Goff didn’t start if healthy enough to suit up for the game.

The Rams foreshadowed their decision to turn the page on Goff’s tenure as the starting quarterback. Now, he goes to a franchise that’s in rebuild mode. This offseason, the Lions hired general manager Brad Holmes and head coach Dan Campbell to take over for Bob Quinn and Matt Patricia, respectively.

Goff will attempt to reinvent himself under a first-year full-time head coach with a franchise that hasn’t had playoff success in nearly three decades.

Brad Holmes rose through the ranks with the Rams organization, working his way up from a scouting assistant to the director of college scouting. He signed a five-year contract with the Lions to oversee what looks like a rebuild.

Holmes has familiarity with Goff, whom the Rams selected with the No. 1 overall pick in 2016. He’ll also acquire premium draft picks to revamp the roster in the coming years.

The Lions dealt an aging quarterback with two years left on his deal for a good haul. Detroit will have two first-round picks in 2022 and 2023, and Holmes could use that draft capital to fill voids across the roster or package them to move up for a quarterback.

Going into the 2021 campaign, the Lions have a solid placeholder at quarterback in Goff. If he’s not the guy, the future draft picks allow the front office to change course. After the 2022 campaign, Detroit can release Goff and save $23.9 million in cap space, per Over the Cap.

If the Lions hit on early draft picks, the franchise can take a positive turn in the coming years. More importantly, Detroit has flexibility because of the compensation it received for Stafford.

The San Francisco 49ers lost twice as a result of this blockbuster deal.

“Him in Kyle Shanahan’s offense, just to be totally real and honest about that, yeah, I think Kyle could rein him in a little bit to take away some of the mistakes,” Simms said. “That could be a very dangerous offense.”

In 2020, 49ers quarterback Jimmy Garoppolo battled an ankle injury and struggled through six games, throwing seven touchdown passes and five interceptions, so we shouldn’t be surprised at the team’s willingness to find an upgrade at the position.

The 49ers missed out on Stafford, and they’ll see him within the division twice a year as the Rams’ starting quarterback.

San Francisco may have a shot at a quarterback such as Deshaun Watson if the Houston Texans decide to trade him, but that may come at a much higher cost now that the market has been set, which leads us to our last winner.

The Lions traded 32-year-old Matthew Stafford, whose imminent split with the team became public. But still, Detroit was able to recoup a third-round pick and two first-rounders for him.

Nevertheless, he could potentially land a massive deal for a dynamic 25-year-old quarterback on the rise. In 2020, the Texans quarterback logged a league-leading 4,823 passing yards with 33 touchdowns and seven interceptions on a 4-12 squad.

Watson helped lead the Texans to the playoffs in two of the last three seasons. He’s also a three-time Pro Bowler. Stafford has only earned that accolade once in 12 campaigns.

The Texans will receive plenty of offers for Watson this offseason. With the Lions’ package for Stafford, Houston can up the ante for their disgruntled signal-caller. Caserio could easily push for three first-rounders and a starter in exchange for his franchise player.