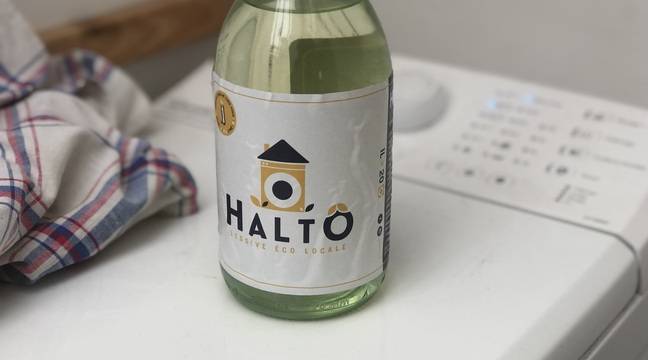 “Won’t it come out all black?” »Adept of natural products for the household or cosmetics, we admit that we were not very reassured when we were told about wood ash-based laundry. However, this is exactly what the two creators of Haltô, based near
Rennes for Alexandre and
Nantes for Régis, who hope to bring this ancestral method back to French homes. “We didn’t invent anything, it’s been 3,000 years that we wash our clothes in this way, smiles Régis Béthuel, 37 years old. It has simply fallen into oblivion since the 1930s, with the development of chemicals and
washing machine. »

It is in their respective garages, in Livré-sur-Changeon and Rezé, that the two associates and friends prepare their mixture (which it is also possible to do it yourself). At the bottom of the Nantes garden, three vats rest. Inside, several kilos of ashes were covered with water. “You just have to wait a week for it to sink to the bottom, then we will filter several times with linen sheets,” explains the entrepreneur, previously in charge of communication in a large group. A liquid is obtained strongly loaded with potash, which is a natural surfactant. Haltô does not wash “whiter than white” but at least it does not contain
Palm oil, and it’s 100% local! “

To produce their laundry, “in the process of obtaining the Nature and Progress label”, no need to chain barbecues. The ash is offered to them by the pools of Fougères (Ille-et-Vilaine) and Nort-sur-Erdre (Loire-Atlantique), which use wood to heat the water in the basins. Then, their 20 liter cans do not go very far either since they are only sold in the Rennes and Nantes regions. Since the launch last October, around forty bulk stores have already offered the product, among others ecological laundry. In this
Rennes store, It is for example available at the pump, at 5.70 € per liter.

And then the washing-up liquid

Suddenly, we also wanted to test with “everyday laundry” (for really dirty parts, Haltô recommends removing them with black soap before putting them in the machine). We put the same amount as for a classic laundry, crossed our fingers throughout the cycle, and surprise… the clothes came out nickel and it smells nothing, neither good nor bad, after drying. “That’s the real smell of clean,” smiles Régis Béthuel. For those who wish, it is also possible to add essential oils. »

Ultimately, the two partners hope to be able to multiply their production points elsewhere in France. If they manage to reach 300 liters of washing powder per week, they also plan to settle in more suitable premises and surround themselves with chemists to develop their own recipe for dishwashing liquid. As for wet ash, they are looking for market gardeners interested in recovering it and using it as fertilizer.